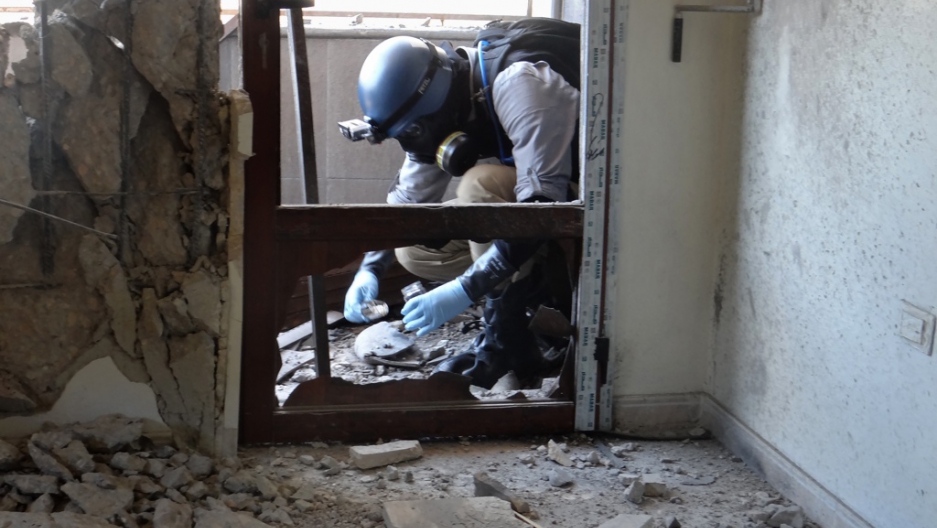 BUZZARDS BAY, Mass. — The question of who was behind last month’s chemical weapons attacks in Syria is an emotional hot-button issue. Like evolution or global warming, no amount of scientific evidence will persuade those committed to a certain viewpoint.

The United States and most of its allies maintain it was the regime of Syrian President Bashar al-Assad, which he denies. Russia's sticking to its assertion that the rebels perpetrated the attacks to draw in the United States. Still others are pointing the finger at rogue elements within the Syrian government, while some hold to even more extreme positions.

With Monday’s release of the United Nations “Report on the Alleged Use of Chemical Weapons in the Ghouta Area of Damascus on 21 August 2013,” many expected that the thorniest questions would have been put to rest.

The deadly nerve agent sarin was definitely used, and, while the international organization refrained from assigning blame, the large and detailed body of evidence allowed experts to conclude that the Syrian regime was almost definitely behind the tragedy.

“The large scale use of Sarin, the direction of the rocket attacks, and kind of rockets used in the attacks all point to use by Assad’s forces beyond reasonable doubt,” according to the Washington-based advocacy group, the Arms Control Association. “The conclusions reached by the United States and European governments would now appear to have received corroboration by a source the Russians and Syrians will have trouble discrediting.”

The whodunit drama around the poison attacks, which marked one of the deadliest days of Syria’s 2 1/2-year civil war, has reached a point where it can, perhaps, only be captured in satire.

The wryly profane newspaper The Onion summed it up in a piece dated Sept. 4. It was headlined: “Assad unable to convince Putin that he used chemical weapons on Syrians.”

“We need to know all the facts before we act,” the piece “quotes” Putin as saying. “I don’t care how many autopsy reports, laboratory tests, or pictures of Assad pressing a button labeled ‘chemical weapons launcher’ he sends me — before we have conclusive proof that he and not the opposition forces did this, we cannot say that Syria is in violation of international law.”

But Syria is no laughing matter, as the civilians battered by a war that’s claimed more than 100,000 lives can attest.

Last week, there seemed to be a glimmer of hope on the chemical weapons impasse. Most of the major players embraced a diplomatic solution to the problem, under which Syria would hand over its chemical weapons to international inspectors.

But a UN resolution has hit several snags. Russia is resisting any reference to the possible use of force should Syria shirk its obligations under the agreement, and is also opposed to condemning Assad for using chemical weapons.

It would be tempting to dismiss Moscow’s grumblings on Syria as just more usual truculence, but aspects of the Kremlin’s point of view are receiving support from surprising quarters.

Florida Democrat Rep. Alan Grayson is fast becoming a major thorn in the administration’s side, by raising some pretty uncomfortable questions.

Grayson accepts the UN’s conclusion that chemical weapons were used in Syria, but rejects the follow-on assessment that Assad was behind it. He cites a report from German intelligence indicating that rogue elements within the Syrian military may have carried out the attacks without the president's permission.

Bild am Sonntag, a widely read and influential national Sunday newspaper, reported that the head of Germany’s foreign intelligence agency, Gerhard Schindler, told a select group of German lawmakers that intercepted communications had convinced officials that Assad did not order or approve on the Aug. 21 attack.

The report has not been widely publicized in the US media, nor has Congress been briefed on it. Grayson wants to know why.

“My view is that the Syrians probably have suffered a breakdown in the command and control of their chemical weapons,” Grayson told Salon earlier this week. “That’s what German intelligence said. It’s unfortunate that I found out about the German intelligence from newspapers, even though I’m serving on the Foreign Affairs Committee, I would expect the administration to tell me, but that’s another story.”

Grayson also wants to know why he and other legislators were not briefed on a letter sent to the president by 12 former intelligence officers expressing serious reservations about the administration’s version of events in Syria.

“We regret to inform you that some of our former co-workers are telling us, categorically, that contrary to the claims of your administration, the most reliable intelligence shows that Bashar al-Assad was NOT responsible for the chemical incident that killed and injured Syrian civilians on Aug. 21,” wrote the group, made up mostly of retired intelligence officials, diplomats, and military personnel.

The Florida Democrat accused the Obama administration of manipulating the intelligence to force lawmakers and the public to accept its position.

Russia has complained, with some justification, that the UN report focuses exclusively on the Aug. 21 attacks, while there have been many — perhaps dozens — of other incidents of chemical weapons use.

Moscow wants the UN to look into an attack in Aleppo in March — one in which the UN itself has said there’s reason to think the rebels may have been the perpetrators. Russia gave the UN a 100-page report in July presenting its evidence.

In May, Carla Del Ponte, a member of a UN commission of inquiry, told Swiss TV that there were "strong, concrete suspicions but not yet incontrovertible proof" that the rebels had used sarin gas.

She described herself as “a little bit stupefied by the first indications we got ... they were about the use of nerve gas by the opposition."

It was to look more closely into the attacks near Aleppo that UN inspectors were on the ground in Syria on Aug. 21. They were redirected to conduct investigations into the more recent, more serious incident.

The questions continue to mount, with largely unsubstantiated reports making what on the surface seem to be outrageous claims.

Washington's Blog, a website that appears to take a highly critical view of the administration, insists that the Aug. 21 attack was a plot by the rebels with their Qatari and Saudi backers to get Washington to step in and do their fighting for them.

“An Egyptian intelligence report describes a meeting in Turkey between military intelligence officials from Turkey and Qatar and Syrian rebels. One of the participants states, ‘there will be a game-changing event on Aug. 21’ that will ‘bring the US into a bombing campaign’ against the Syrian regime.”

There are even some who claim to have evidence that Israel may have been behind the attacks.

“Of note is the fact that Israel possess (sic) Sarin gas and it is not party to the Chemical Weapons Convention (CWC),” writes the Canadian Centre for Research on Globalization. “Israel has the most to gain by the chemical attack incident … Clearly, Assad is the biggest loser.”

Sometimes it’s difficult to tell The Onion’s news from the so-called serious stuff.

More from GlobalPost: Among Syria's rebels, anger at US about-face