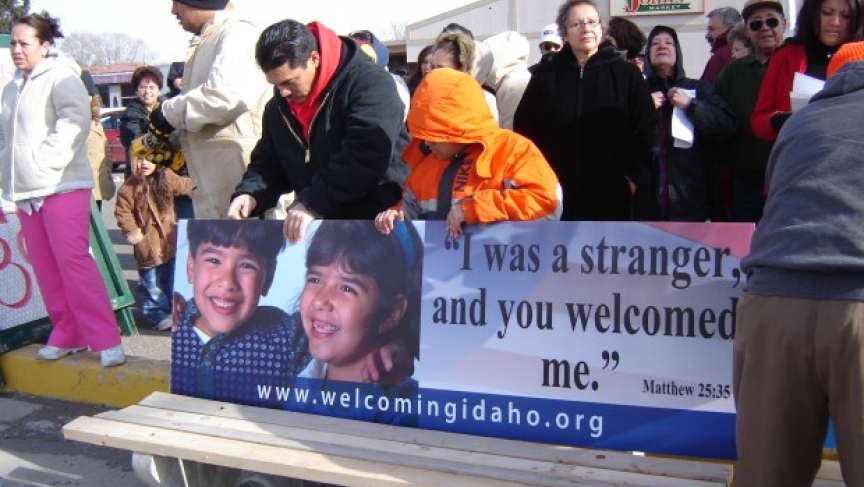 You may not have been aware, but it’s “Welcoming Week” here in the U.S. — events are being held in 22 states bringing together immigrants and people born in this country.

The White House also honored 10 community leaders from across the nation Thursday who work to integrate immigrants into their cities and towns. The week’s festivities are part of an on-going effort to make immigrants feel, well, more welcome.

Mayor John Bechtel arrived in Wilder in 1958. Sitting outside City Hall, you get a view of the town’s two restaurants.

“We have Rosa’s across the street here, and we have Alenjandra’s just down the street here. Both good little restaurants,” said Bechtel, admiring his town, which also has a relatively new elementary and high school.

Bechtel has seen the demographics of his town change. Today, it’s perhaps more than 70 percent Hispanic, a mix of documented and undocumented. Bechtel — who is bald, white, and in his 70s — wears a Cuban-style guayabera shirt and avoids formal titles.

“(I) started introducing myself to new Hispanic families as Juan Pelón, John Bald. It’d get a serious look, then they would laugh, the ice is broken, you’re friends,” he said.

Bechtel and the city council also officially declared Wilder a welcoming town in 2009, one of two Idaho cities, along with Rupert, to make this official pledge.

The declaration came in the form of a one-page resolution, Bechtel reads aloud.

“These residents, composed of native Idahoans from all backgrounds and a large Hispanic community, contribute to the shared responsibility of welcoming new community members who have traveled thousands of miles to resettle with their families in the United States,” it says.

The resolution goes on to criticize the U.S. Congress for its failure “to enact responsible, sensible, and humane immigration reform.”

Bechtel said he knows it’s just a piece of paper, and that most people here probably don’t even know it exists. Still, Leo Morales, with the ACLU of Idaho, who also grew up in Wilder, said it’s not an empty gesture.

“I like to believe that it’s more than symbolism, that it carries a lot intent,” Morales said. “It’s the city leaders saying, ‘Look, this issue is so important to us that we’re going to draft a resolution that we want to have more positive dialogues and conversations so that we create successful communities.’”

Morales, a U.S. citizen originally from Mexico, pushed that dialogue when he ran the group “Welcoming Idaho,” an affiliate within a national, non-profit called “Welcoming America.” It’s goal is to get past the media chatter — the polarizing immigration debate — and have U.S.-born people meet new arrivals, including refugees, as neighbors.

The chapters do this through events like roundtables and potlucks. The Welcoming Idaho campaign also put up signs and billboards with photos of brown-skinned people and simple messages such as: “Immigration is an American Experience, Acceptance is an American value.”

Morales said reactions to the billboards were mixed.

“Some individuals really liked the very positive messages. Others thought, this is just about illegal immigration, and we don’t like it,” he recalled.

This divide persists in Idaho, and many parts of the country. A majority of Republicans in Congress, certainly in the House, maintain that undocumented immigrants are lawbreakers who shouldn’t be rewarded with a path to citizenship. Case closed.

Community organizer Krista Bustamante in Boise, who advocates for a pathway to citizenship, heard from the opposition at a recent town hall in Meridian, Idaho.

“People coming with shirts that said, ‘Illegals Go Home’ or ‘Send Everyone Back.’ There was some heckling, there was some clapping in people’s faces trying to get a reaction out of our side,” Bustamante said.

“We are a very red, Republican state and I understand that," she said. "That’s why organizing the community is so much more important, because there is a need, and there are people who want immigration reform, even though they may not be as vocal.”

Bustamante, who is of Mexican descent and was born and raised in Idaho, stressed that Idaho is a welcoming place for immigrants. She points to the capital, Boise, where city officials have successfully worked with community organizers to integrate refugees and other immigrants into the fabric and economy of the city. Jan Reeves, director of the Idaho Office for Refugees in Boise was one of 10 people honored Thursday by the White House.

Still, Bustamante would like Boise to go a step further and follow the lead of tiny Wilder — officially declare itself a welcoming place.

Boise City Council President Maryanne Jordan wasn’t opposed to the idea, but said that the city simply hadn’t felt the need to formally declare itself a welcoming community.

“You can see that the effort is there. Rather than making a huge event out of giving it a name and a formal resolution, we just try to walk the walk,” said Jordan. “Being a welcoming city is kind of in Boise’s DNA.”

Perhaps, but Wilder mayor Bechtel still supports the idea of other cities formally declaring this.

“I would hope that every town in the country would. And I think that if people got to know each other that we could solve the immigration problem,” he said.

That might be a naïve pipe dream. But Bechtel knows what he’s seen.

“We’ve got a good community, I feel that we all work together good. I’m just happy living here. I would not want to live anyplace else,” he said.