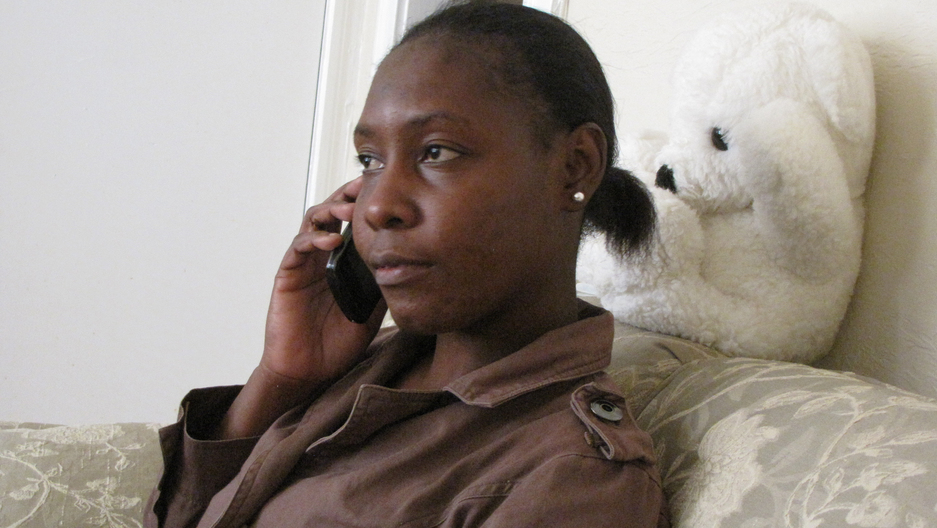 Carmine Pierre calls her 11-year-old son Marc Kelly in Haiti. She hasn't seen him since he was five. (Photo by Amy Bracken.)

After the 2010 earthquake in Haiti, the U.S. waived visa requirements for Haitian children being adopted by Americans.

More than 1,000 kids were flown to the United States to live with their new moms and dads. But what about the children in Haiti whose biological parents were living and working in the U.S.?

Countless Haitian families were split between the two countries, and reunification of those families is an ongoing struggle.

Such is the case for Carmine Pierre. On a recent afternoon, she sits on the couch in the bare one-bedroom she shares with her sister outside Boston, scratching away at a pre-paid phone card. Pierre burns through these things, calling her 11-year-old son, Marc Kelly, in Haiti.

She hasn’t seen him since he was four.

Pierre got a chance to come to the states in 2007 when her father was granted asylum. So she left Marc Kelly in the care of her aunt in Haiti, while she worked to get residency and make some money in the U.S. The idea was to bring her son here.

It became even more urgent after the earthquake in 2010.

Pierre says her aunt was in the kitchen with Marc Kelly when the earthquake struck. Her aunt pushed him outside and saved his life, but she died, along with her son. Pierre says her uncle survived but is still in shock.

Marc Kelly is among more than 100,000 Haitians who’ve been approved for family-based visas to come to the U.S. yet are still waiting to receive the necessary documents. The children of green card holders, like Marc Kelly, wait on average about three years. For many other family members, it can take 12.

It’s not supposed to be like this, says Steven Forester, a Miami-based immigration policy expert who’s been campaigning for a remedy since the quake.

“Ten days after the earthquake,” Forester said, “an op-ed appeared in The Washington Post by Elliott Abrams, of the Reagan and Bush Administrations, saying, ‘Look, if you want to help Haiti recover, one very effective way is to increase legal immigration.’”

One argument was that it would boost remittances from the U.S. to Haiti.

“So a number of major newspaper editorial boards started advocating that a Haitian Family Reunification program be created for those people who our government has already approved to join their families here,” he said.

Over the past three years, letters and petitions have poured into the White House and the Department of Homeland Security in favor of such a program.

Part of the appeal, Forester says, is simplicity. It wouldn’t require an act of Congress, just executive approval.

Forester knows this because it’s already been done — for Cubans back, in 2007 under George W. Bush. President Obama renewed the policy for Cubans in 2010, after the earthquake in Haiti.

It’s a sore point for Haitians, especially in South Florida. Many complain about a double standard when it comes to Cuba.

“It is really, really frustrating that after over 30 years we are still fighting for the same things,” said Marleine Bastien, the head of a social services organization called FANM, or Haitian Women in Miami. She feels let down by the Obama Administration.

“It is time,” Bastien said, “for president Obama to create a Haitian family parole, just like the Cuban family parole has been created. When you compare Cuba and Haiti right now, Haiti is in a ten times worse state than Cuba.”

The Administration hasn’t come out against a Haitian Family Reunification program. No one at Homeland Security would speak on the record about the issue, but some Haiti activists say people close to the president assured them it was on the agenda — just on hold, first while Obamacare was being debated, and now with immigration reform unresolved.

But many Haitians say the immigration bill doesn’t address their immediate concerns. For Carmine Pierre, it’s that her son’s spending his childhood in an unstable household. But she smiles when she talks about the phone calls they share.

Through peals of laughter, she recalled, “He said, ‘Ma, I’m getting big now. When are you going to come get me?’”

How does she respond?