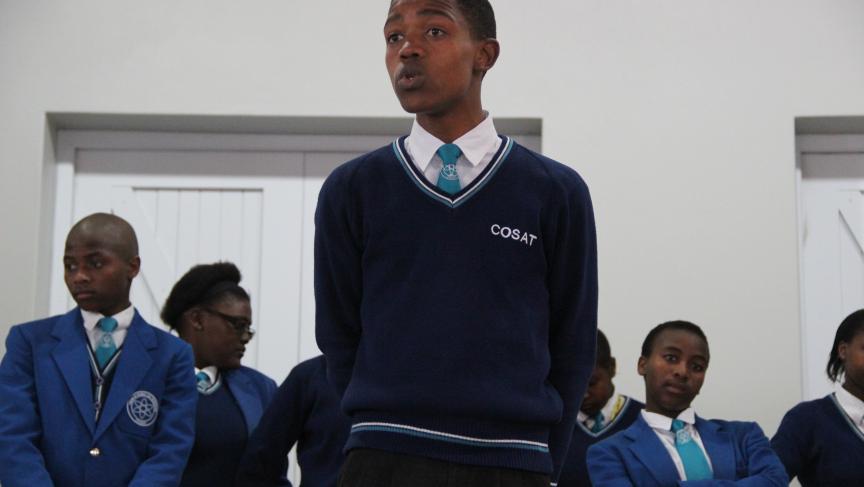 Siyathemba, a junior at COSAT, delivers a speech during student council elections.

At 8 a.m. on Monday morning, the student body at the Centre of Science and Technology (COSAT) filed into the school auditorium.

On stage, 19 students in matching blue sweaters shifted nervously. Each was about to explain — in just one minute – why he or she should be elected to student council.

The school’s principal, Phadiela Cooper, didn't expect this year’s campaign to feel like a political contest.

“It will be more of a popularity contest,” she said, predicting that students would try to win votes through charm or humor, rather than policy manifestos.

At first, it looked like Cooper was right. Vuyokazi, a junior with black glasses, stepped forward on stage. She unfolded a piece of paper with writing on both sides. It looked like she was about to deliver a State of the Union address.

After a dramatic pause, she looked up at the audience and said simply, “Don’t waste your time. Just vote for me.” That got plenty of laughs.

But then a broad-shouldered junior named Lwando stepped up.

“We all know that our school has experienced some drastic changes in terms of behavior,” Lwando said in a serious tone. “Bad behavior has managed to make its way into our school.”

Lwando said vandalism and truancy were common problems, and as a leader he would try to correct them — though in his one-minute speech he didn’t say how.

“I feel that you guys should vote for me because of the issues of late-coming, and the behavior of us learners towards our teachers,” she said.

She said classmates were disrespecting teachers and violating the school’s dress code.

There were more speeches like this — candidates criticizing student behavior. How would this go over? Would these candidates be seen like Jimmy Carter — forever criticized for scolding the American people?

After the speeches ended and the votes were cast, Lerato, a sophomore, said she voted for a candidate who acknowledged the hard truth — that students are acting out of line

“Behavior is really a problem in our school,” Lerato said. “So I actually liked the fact that he was focused on that behavior.”

Other students said similar things — they wanted leaders who would hold students accountable.

Cooper, the principal, said she thought some of the speeches were very good. The campaigning did not appear to be a popularity contest.

“I’m glad that my initial reservations weren’t substantiated,” she said.

Cooper said the event left her feeling hopeful that students — not just teachers — could help improve the school.

Election results will be announced next month.