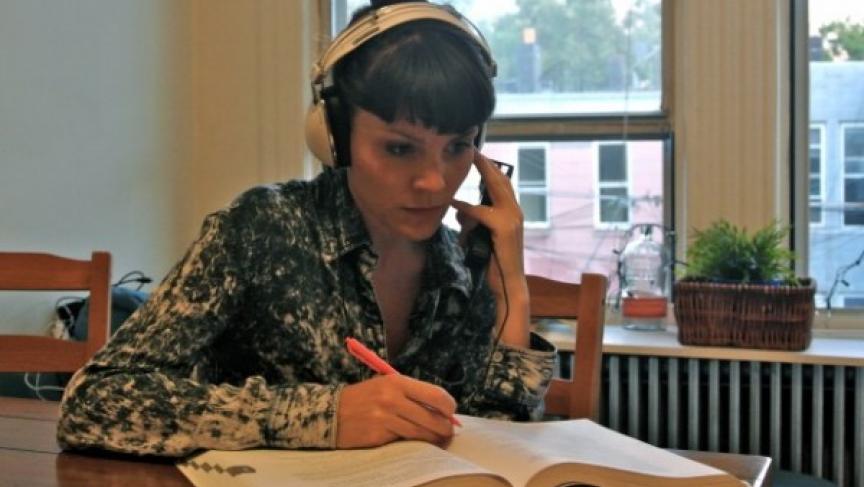 I am a journalist, but I'm also an actress – and I have an accent. On my first day of acting school in Manhattan, as soon as I opened my mouth to say "good morning," a nice academic advisor enrolled me in an accent reduction course. I met a lot of foreign actors like me there.

One of the first friends I made was Nanda Abella, who's from Argentina.

"The moment you walk in the audition room, you see the faces when you have an accent. You see how they look at you," she says.

Nanda eventually hired a private teacher. Every other week she pays $90 dollars for 45 minutes with an accent coach who helps her to sound more American.

One thing is clear to Nanda – the combination of being a Latina and having the accent limits the kinds of roles she gets. She's been a maid, a dance professor of Latin rhythms, a Latino working in a tattoo parlor – all of them a Latino "doing something."

"I don't mind being a Latina doing something," she says. "I mind when it is a Latina in a position that denotes some kind of prejudice against the Latino population. I want to be the Latina lawyer, the Latina professional. You can't be a successful woman because you are a Latina? Oh, c'mon!"

For Latinas who don't look Latina, it can be even harder.

"I've met this Mexican girl, who looks like she is German, and the poor thing can't work because she has a Spanish accent," Nanda says. "But she can't go for Latina, she doesn't fit the stereotype of the Latina."

Things are starting to change, though. Big stars like Sofia Vergara, of Modern Family, and Penelope Cruz, show starred in a Pirates of the Caribbean movie, are slowly training the ears of mainstream American audiences to accept thick accents.

"The fact that Penelope Cruz can be in a leading part shows you that people are more open to hear those accents," Nanda says. "I feel things are opening more and more."

Rüya Koman sees it that way too. She's an actress from Turkey, but last year, she got a role as a Latina in a play in New York. The director saw her headshot and assumed she was Colombian or Venezuelan, so she had to learn to speak with a Spanish accent.

"I was listening to Sofia Vergara for days," Rüya says. "I tried to imitate her, but I didn't have enough time to do it. Apparently, I sounded very Russian."

Rüya's still working on it, though.

"I really see a lot of casting calls where they need a Hispanic actress. I think there is a huge market of things you can do with an accent."

It's not just a growing market for actors. There are also more opportunities for Spanish-speaking journalists. That's good news for me. But once again, the accent comes into play. I have a Castillian pronunciation, so even my Spanish sounds different from the Spanish we usually hear in the U.S. I guess I'll always have an accent no matter what language I speak!

Check out Nanda Abella's accented English in this scene from an upcoming movie:

Sara Loscos is with Feet in 2 Worlds, a project of the Center for New York City Affairs at The New School.

Editor's Note: These two comments were left on TheWorld.org before TheWorld.org relaunched as PRI.org. Feel free to respond in the comments below.