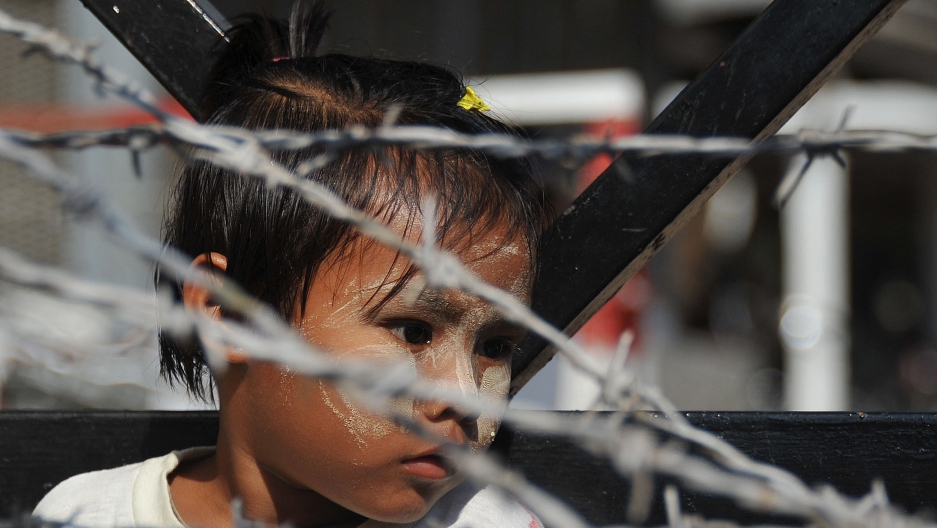 A young girl awaits the release of a relative from Yangon's Insein prison in Yangon in January, 2011. Myanmar has freed hundreds of political prisoners. After successfully liberalizing their government, many of these democracy advocates have returned home to shattered lives and broken families.
Credit: Soe Than Win
Share

He takes in the crowd’s euphoric screams, swats back the limbs outstretched in hopes of brushing fingers against Aung San Suu Kyi, a superstar dissident expected by millions to shepherd Myanmar out of the darkness. Here, his shattered life has purpose.

Aung Kyaw Moe — 40, cherub-faced, built like an oil drum — is tasked with protecting Myanmar’s most celebrated figure at crowded events. He is a pro bono, part-time security guard, part of a legion of men whose loyalty is considered ironclad following stints in prison for the pro-democracy cause.

“Sometimes she scolds us for being too rough with the crowds. But as security, we can’t be democratic,” he said. The crowds are largely composed of gleeful supporters grateful to glimpse an icon long hidden away under house arrest. But her protectors are mindful of past assassination attempts. “Our responsibility is to protect her at all costs,” he said, “and all we have are our hands.”

Over the past two years, as Myanmar’s reviled military has ceded direct control to a partially elected parliament under its sway, nearly 2,000 political prisoners have been freed in mass amnesties. That so many dissidents are being liberated without violent upheaval is hailed as historic by the White House, which has peeled back more than a decade’s worth of harsh sanctions.

These releases have also freed Aung San Suu Kyi, perhaps the most famous former political prisoner alive next to South Africa’s Nelson Mandela. The prim and elegant daughter of Aung San, an independence hero who helped cast out British imperialists, her own premiership was thwarted when the military voided her party’s 1990 election win.

Since her 2010 liberation, Aung San Suu Kyi has ascended to parliament. There, she has joined ex-generals in working to overhaul this troubled nation, an act of reconciliation applauded around the world. A casual observer of Myanmar can be forgiven for assuming she and her pro-democracy foot soldiers have entered an era of celebration and triumph.

But many rank-and-file former political prisoners — like Aung Kyaw Moe — are still struggling to find their place in reform-era Myanmar.

They have exited prison gates to cheering crowds only to return home to unbearable strife. Divorce is common. So are evaporated livelihoods and children that barely know them. Their bodies are still weakened from prison diets: half-spoiled rice and stews made of rotting vegetables. Their thoughts drift back to interrogation rooms where the beatings would drag on for days.

“When you go to jail, everything falls apart. Your family falls apart,” said Aung Kyaw Moe, an entrepreneur whose bookshop went bust during his most recent prison stint from 2007 to 2012. “Two friends sent to court with me both got divorced. I’m lucky to still have a wife.”

A disciple of Aung San Suu Kyi’s National League for Democracy party since the 1990s, Aung Kyaw Moe was arrested for arranging pro-labor union seminars at a US State Department facility in Yangon, the American Center, and later charged for joining a gathering larger than five people. The gathering in question was the so-called “Saffron Revolution,” a 2007 street uprising backed by tens of thousands defying totalitarian rule. It was violently crushed by the military.

“I did something good. I went to jail for a good cause,” Aung Kyaw Moe said. And yet, in his wife’s eyes, the sacrifices that ingratiated himself to Aung San Suu Kyi’s movement are sabotaging the family.

Desperate to feed and clothe their son in her husband’s absence, she sold off his shop’s inventory of books. The family is now reliant on her meager seamstress income; Aung Kyaw Moe’s road gigs with Aung San Suu Kyi’s party amount to unpaid volunteerism. They live in a ramshackle home, built of moldy bricks and cheap plywood, with 20 others outside Yangon.

“My wife says politics interfere with my job search,” he said. “She’d be thrilled if I quit.” His son, now seven, is scarred from seeing him in shackles at court dates. Worse yet, he said, the boy turned agoraphobic after witnessing security forces attack a crowd at a birthday party for Aung San Suu Kyi five years ago.

“This is my dilemma. Do I abandon my responsibility to my family? Or to my cause?” he said. “A lot of people don’t know what to do anymore. We’re like wildlings ... We’re kind of lost.”

“Burma is a traumatized society”

The passage of time has blurred the fine details. But Hla Htut Soe — a lean man with shoe-polish black bangs drooping over his forehead — is still tormented by what he saw: young women, two of them, bleeding to death in the street.

“They were about 20 years old. Both protesters. I can barely recall their faces,” Hla Htut Soe said. The year was 1988 and Yangon, Myanmar’s largest city, was convulsed by an uprising against totalitarian military rule that would ultimately end in at least 3,000 deaths and a domineering army still in control.

Though soldiers eliminated two protesters, they inadvertently spawned a new one. “That was the day my life changed.” Hla Htut Soe, then a mid-tier bureaucrat with the military government’s foreign affairs ministry. He defected to the uprising and lost his job soon thereafter. “I never regretted my choice.”

But two and a half decades and three stints in prison later, Hla Htut Soe is a hurting, desolate man. Pebbles in jailhouse porridge cracked his teeth; three years straight in a wood-floored solitary confinement cell cracked his mind. He is broke, homeless and on anti-depressants, acquired with the help of a support network called Freed Political Prisoners. He sleeps in an out-of-the-way corner of the organization’s threadbare Yangon office.

“I feel let down at every turn,” Hla Htut Soe said. The 46-year-old’s professorial demeanor is offset by loudspeaker larynx. Even in one-on-one conversation, he has the odd habit of bellowing. “At this point,” he said, “I’m just waiting around to die.”

“Depression is normal for former political prisoners,” said Bo Kyi, whose own years in prison — for protests against military rule — total seven. “They want to take care of their families but they can’t. They feel useless. So they start drinking and lose control of their lives.”

Just a few years back, the state would barely acknowledge the existence of political prisoners in its gulags. Now, at the US State Department’s urging, Bo Kyi’s network has forged an uneasy alliance with the office of Myanmar’s president, Thein Sein, an ex-general turned reformer.

Htet Soe (a pseudonym) is one of their recent victories: his seven-year sentence for a politically motivated bombing in Mandalay, Myanmar’s northern economic hub, was just cut short to one-and-a-half years. “I didn’t do it,” he said. “The police forced me to confess.”

“But now I have no idea what to do,” he said two days after his late July prison release. “My wife left me for another man when I got locked up.” His lips curled into a pained and unconvincing forced smile.

“I used to run a tea shop but it’s gone now,” he said. “I’ll need four million kyat (roughly $4,000) to start a new one.” But Htet Soe can barely afford a bus ticket from Yangon, where he was locked up, to his home city in the central plains.

In an era defined by the Arab Spring, Myanmar appears fortunate to be transitioning away from despotism without a ruinous, blood-soaked revolution.

But a transformation engineered from within offers little in the way of cathartic retribution: no Mussolini on a meathook, no Mubarak locked in a cage. The military cabal that cowed Myanmar’s citizens and ran its economy aground remains wealthy and influential. A former prime minister and ex-head of the nation’s feared spy apparatus, 73-year-old Khin Nyunt, has reinvented himself as the owner of a Yangon art gallery and coffee shop open to the public. (Khin Nyunt declined an interview request from GlobalPost.)

“Yes, we’ve benefitted from the reforms,” Bo Kyi said. “But we can’t take action against the torturers, especially the police and soldiers. We just want them to confess what they did. If they confess, we can forgive them.”

Bo Kyi has a proposal that, for now, appears farfetched: “We want the government to treat former political prisoners as service members,” he said. “Give them free medical care and a pension like retired soldiers.”

His association is already compiling a list of men and women jailed for dissent since 1962, the year Myanmar’s military seized control of the nation in a bloody coup. “We’ll propose this to parliament and request assistance from the US and the (European Union),” Bo Kyi said. “Parliament won’t do it. Neither will Aunty Suu [Aung San Suu Kyi]. So we have to push.”

A splendid idea, said Hla Htut Soe. And yet he is too world weary to raise his hopes.

“This plan is a far-away dream,” he said. He anticipates no reparations, no great trial to investigate Myanmar’s past wrongs and set them right. “It’s not so easy to reenact South Africa in Myanmar,” he said.

Instead, Hla Htut Soe reaches into the 15th century and plucks out a historic analogy more to his liking. It is the legend of a peasant girl burned at the stake for rebellion but exalted as a righteous martyr decades after her death. “Maybe,” he said, “we can end up like Joan of Arc.”