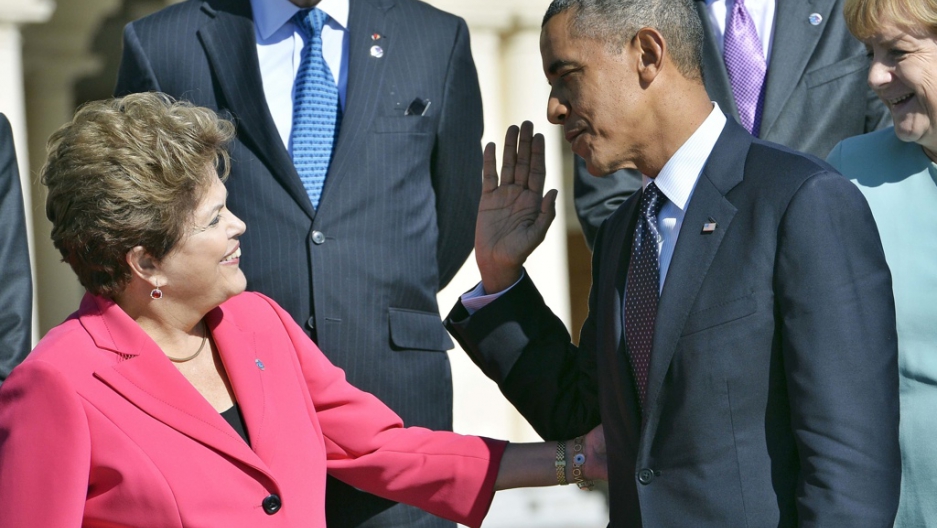 Brazilian President Dilma Rousseff and Barack Obama at the G20 summit in Russia on Sept. 6. When will they meet next?
Credit: Jewel Samad
Share

LIMA, Peru — Angered by alleged US spying on Brazil, President Dilma Rousseff on Tuesday postponed her state visit to the White House planned for next month.

That marks another setback on the international stage for US President Barack Obama.

The leaks strained the United States’ relations with European allies in late June, ahead of critical trans-Atlantic trade talks.

Now, Brazil’s leader has called off her Oct. 23 official visit, demanding answers and a commitment from Washington to stop snooping in her country.

It was set to be the first state visit by a Brazilian president in about two decades, and the only one scheduled this year at the White House.

Although the Obama administration claimed the postponement was a joint decision made by the two presidents, some media described it as the sternest rebuke yet from a friendly nation over NSA leaks.

Rousseff was responding to revelations — courtesy of uber-leaker Snowden via Rio de Janeiro-based US journalist Glenn Greenwald and Brazilian media — that the NSA had been intensively spying on millions of Brazilians, including allegedly eavesdropping on Rousseff’s own emails and phone calls.

At the G20 summit in Russia two weeks ago, she held a one-on-one meeting with Obama in which he personally undertook to investigate the issue and report back to her.

But before he got a chance to do so, more NSA disclosures revealed that the agency had also targeted Petrobras, Brazil’s state oil company, in what Rousseff said amounted to industrial espionage.

And the response from US Director of National Intelligence James Clapper probably did not help either. He said it’s “not a secret” that the US gathers economic and financial data, and such surveillance works “to enhance the security of our citizens and protect our interests.”

Then a last-ditch, 20-minute phone call from Obama on Monday night failed to soothe his Brazilian counterpart’s fury.

In a statement Tuesday, Rousseff’s office said the “conditions” for a successful visit were not in place, given the “absence of a timely investigation into the incident [of US spying on Brazil], with corresponding explanations and a commitment to cease the interception activities.”

It added, “The illegal practices of intercepting the communications and data of Brazilian citizens, businesses and government members constitute a serious assault on national sovereignty and individual rights, and are incompatible with the democratic coexistence between friendly countries.”

White House spokesman Jay Carney claimed that the two presidents had agreed the spying issue would have overshadowed her visit had it gone ahead as planned in October.

“As the president previously stated, he has directed a broad review of US intelligence posture, but the process will take several months to complete," Carney said.

The visit was intended to officially mark warming relations between the US and the emergent Brazil, now the world’s seventh largest economy, with burgeoning trade links with its northern neighbor.

Their meeting was expected to set the stage for deals for biofuels, Boeing fighter jets and oil, as Brazil prepares for next month's auction of its massive Libra offshore oil fields.

More on US-Brazil: Why can't we be friends?

When Snowden this summer applied to more than 20 countries, including Brazil, for asylum, her government said it did not even merit a response.

That’s a far cry from the approach of some of Brazil’s neighbors and harder left allies, such as Venezuela and Bolivia, which showily offered to welcome the whistleblower as he sought to evade US justice.

Nevertheless, Rousseff, who will run for re-election in October 2014, has been under intense pressure at home to be seen as standing up to the US.

In recent months a wave of national protests against official corruption and the dire quality of public services caused her approval ratings to dive.

Meanwhile, senior aides, including Silva, were openly briefing Brazilian journalists over the last week that they had been advising Rousseff not to travel to Washington.

Rousseff has since recovered in the polls, to 58 percent. But that may be, in part, because of her tough approach to the US’ spying.

And although Tuesday’s announcement could further rebuild her popularity with many Brazilians, particularly those on the left, others will view it with dismay.

Writing in O Globo, Brazil’s best-selling newspaper, on Monday, as speculation mounted that the trip would be canceled, columnist Jose Cansado accused Rousseff of “literally losing north” for even considering snubbing Obama.

In a reference to a recent spat with Bolivia, which resulted in Rousseff apologizing to the impoverished Andean nation, Casado went on to accuse her of not knowing which was more important, Washington or La Paz.

“When there is doubt about what should be the priority of Brazilian foreign policy, it is because something is out of order in the presidency of Brazil,” he added.

Nevertheless, Rousseff did attempt to minimize potential fallout from the postponement. Written in conciliatory language, her official statement claimed the decision had been made jointly by Washington and Brasilia.

“The Brazilian government is confident that once the issue [NSA spying] is resolved properly, the state visit will take place as soon as possible, boosting the building of our strategic partnership to even higher levels.”