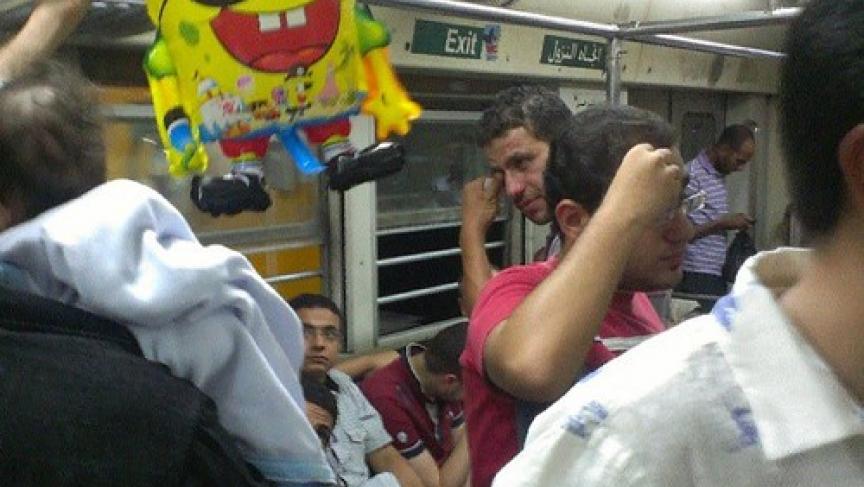 My dealings with the sponge have been, mercifully, brief. But part of me always wondered how well, or even if, SpongeBob traveled. Culturally speaking, I mean. A cursory Internet trawl reveals that the exploits of SpongeBob and his aquatic friends have been translated into many languages, including Arabic.

But here's something I wasn't prepared for: a Tumblr called "SpongeBob on the Nile."

"The best and most insidious part of this project is that people don't tend to notice SpongeBob everywhere. Until you mention it to them, and then they do tend to notice him everywhere," says Elisabeth Jaquette, the co-creator of SpongeBob on the Nile.

Jaquette, currently a grad student at Columbia University, spent the better part of the past six years living and working in Cairo as a teacher.

Jaquette tells me her own SpongeBob awakening happened about a year after the 2011 revolution.

"You're walking through Tahrir Square, and after the first 18 days of the revolution, there were all sorts of street vendors that have set up shop, and they were selling tea and sweet potatoes, and trinkets and everything had an Egyptian flag on it," says Jaquette. "And then when I came back in 2012, the T-shirts were now half SpongeBob. So, the first picture I took was SpongeBob making his way into Tahrir Square."

"I think one of my favorites is a SpongeBob tissue box cover, which was rather cute," Jaquette says with a smile. "Kind of absorbent on two levels."

Jaquette and a friend, Andrew Leber, decided to document SpongeBob's rise in Egypt by starting a blog.

If you scroll through the pictures, you'll be amazed. There's SpongeBob at the beach, there he is in a taxi. And yes, there he is, in a scarily accurate form, made out of pita bread, kebab and vegetable chunks.

Even though Jaquette is back in the US now, the blog is still going strong. That's because people from Egypt and throughout the Middle East, armed with camera phones, keep submitting photos.

"I think my favorite of all is by Reuters reporter Maggie Fick," Jaquette says. "She took a brilliant photo of SpongeBob in Martyr Square in Libya. Maggie was there covering the anniversary of the revolution, and people are celebrating, there's a woman waving a Libya flag. And next to her is a life-size Spongebob mascot."

Jaquette says the blog has documentary evidence of a similar mascot in Syria.

At this point, my journalist instinct is to push, to dig deep. I want to find out why SpongeBob is suddenly appearing so frequently across a region so filled with revolution, war and chaos.

Jaquette offers a corrective: resist that urge to ask "why?"

"You know," she says, "I think if we could answer that question, we wouldn't be running this Tumblr. Certainly there are many theories about SpongeBob's emergence in Egypt, and not just in Egypt, but the region at large. But I think here the question is really more compelling the answers. If we knew the answer, we'd stop taking pictures. Nobody's come up with a good enough theory, so we'll just keep taking pictures."

Or, in the case of Egyptian pop star Hamada Helal, singing about him.

Now I won't be able to get that out of my head. And you won't either.