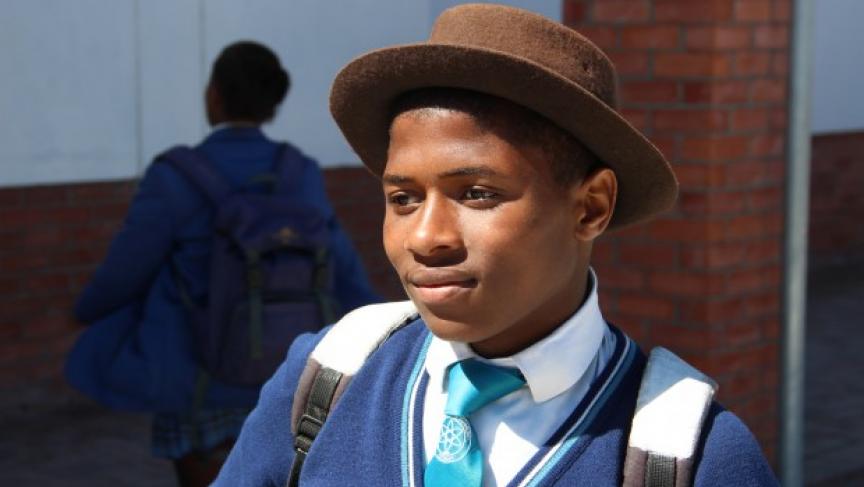 Sive wears a hat to symbolize his transition to manhood.

Back in June, I did a story about Sive (SEE-vay). A junior at COSAT, he had traveled on a three-week leadership program to the US, where he had an incredible, eye-opening experience. Then, shortly after he returned to South Africa, his mother’s health deteriorated. He took her to the hospital. A few weeks later, she passed away.

Since the story first aired, a lot has happened in Sive’s life. After his mother’s funeral, he went through a traditional rite-of-passage ceremony in his family’s ancestral land. Along with other 17- and 18-year-old boys, he spent three weeks in the mountains, learning the customs of manhood in Xhosa culture, and undergoing a traditional circumcision.

Normally, when a young man returns home after such a ceremony, he is greeted by a huge celebration – food, drink, family, friends, and a cow. (Often, the young man receives a cow as a gift.) His old clothes have typically been given away, and new clothes have been purchased, to symbolize his transition to manhood.

But when Sive returned home, there was no such celebration. His mother and father were both deceased, and his older brother – who was the beneficiary of his mother’s life insurance policy – said he had been swindled out of the money (about $3,000) and never saw a cent.

Last week, I talked to Sive about everything that had happened. He was visibly upset and said it hurt emotionally and financially. I asked how he and his brother were doing, overall.

“We are hanging in there,” he said, “trying to figure out a way to live.” He said what made him saddest was the feeling that he was living for himself, rather than his mother.

Sive said his host family in the US has sent him some money each of the past two months, and that has helped a lot. He also learned that a woman in the US, who heard his story on our radio program, created a Go Fund Me page and is trying to raise money to further assist him. You can see her campaign here. [Note: PRI’s The World is not connected with this campaign.]

For the next few weeks, Sive said there is just one thing on his mind – midterm exams. After my brief conversation with him, he finished eating his lunch, and headed off to a classroom to study.