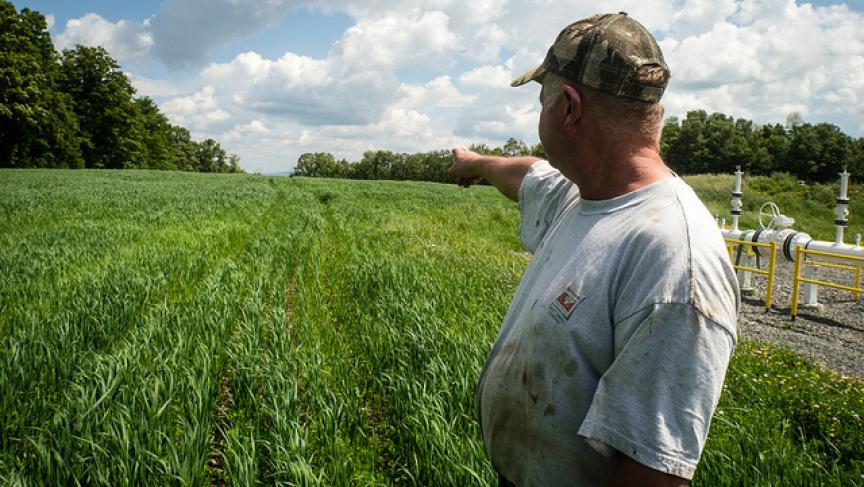 A Pennsylvania farmer shows off his land on June 14, 2013. (Photo courtesy of the Public Herald.)

The practice of hydraulic fracturing, or “fracking,” for natural gas has generated an energy bonanza for the United States, and for some landowners it has also generated a lot of cash in the form of royalties.

But fracking has also caused a lot of controversy and now the investigative reporting group ProPublica has found that some landowners are waking up to an unpleasant surprise: they find their royalty payments are suddenly being slashed.

Pennsylvania farmer Don Feusner's northern Pennsylvania farm was facing considerable difficulties when the oil companies came knocking and tossed him a lifeline. Two of the most prosperous wells in the area, amounting to millions of cubic feet of natural gas, were on his property.

Soon after production began on his property, Feusner was raking in checks of between $6,000 and $10,000 each month from his 12.5 percent share. He thought the oil production would allow him to retire comfortably but his dividends began to shrink and worse, this was happening without explanation. The company, Chesapeake Energy, was deducting expenses from his payments, and those expenses began to increase until they amounted to just about 90% of the income being produced from his well.

Abrahm Lustgarten, an environmental reporter with ProPublica, has been looking into Feusner's case — and many others.

"Speaking in rough numbers, his contract would have entitled him to about $12.50 out of that $100 of income," Lustgarten said. Instead, he’s getting about $1.25 for that unit of gas — about 90 percent less than he expected when he signed his contract.

Though Chesapeake has never revealed a detailed outline of their expenditures, they've attributed their increased share to a practice they call "gathering," the process they use to transport gas to larger pipelines, Lustgarten said.

But they won’t really specify anything more than that," he said. "They won’t tell him how those gathering expenses break down, for what length of pipeline or how the numbers add up. And so he really is left being forced to take their word for it."

Unfortunately for landowners, Feusner's story is not unique. Some experts have estimated up to 70 percent of landowners in similar arrangements have been underpaid for the oil and gas under their property.

Pennsylvanians who were once hopeful about the economic boon fracking seemed to offer have generally been disappointed by the outcome. Individual citizens like Feusner are nearly powerless by themselves, Lustgarten said.

"It’s a very uphill battle," Lustgarten said. "He should expect to spend tens of thousands of dollars just to begin this argument, and he has a very good chance of losing if he does."

The situation in Pennsylvania is emblematic of the nationwide debate between the financial benefits of fracking against the environmental and human impact the drilling affects.

"I think there’s a real mismatch in terms of the average landowner, what they expect when a landman shows up at their door and promises them millions of dollars for drilling, and what actually happens when those landowners go toe-to-toe with some of the biggest companies in the world," Lustgarten said.

Chesapeake Energy did not respond to Living on Earth's repeated requests for comment.