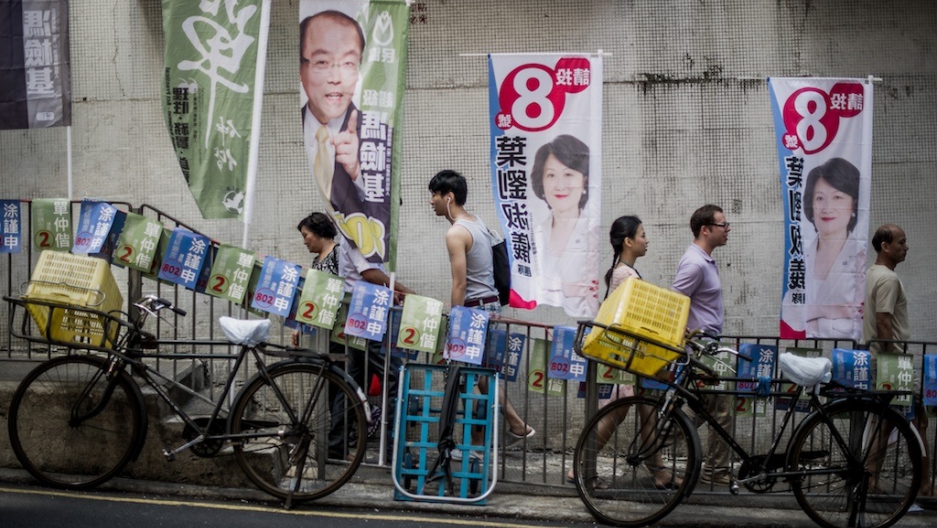 Pedestrians walk past election flags displayed in a street of Hong Kong on September 9, 2012. Hong Kong voters went to the polls in legislative elections seen as a crucial test for the Beijing-backed government, as calls for full democracy grow and disenchantment with Chinese rule surges.
Credit: Philippe Lopez
Share

HONG KONG — When it comes to designing democracy in the territory of Hong Kong, China has a message for the West: butt out.

The latest scuffle began over the weekend when UK Foreign Office minister Hugo Swire wrote an editorial in the South China Morning Post expressing support for Hong Kong’s movement toward universal suffrage in 2017. In it, he stressed that the shape of this system was “for the governments of Hong Kong and China — and the people of Hong Kong” to decide, and said that Britain, the city's former colonial master, “stands ready to support in any way we can.”

Under the "One Country, Two Systems" policy, Hong Kong has a separate legal and political system from mainland China. Though previous efforts to push for democracy have stalled, Beijing has promised to allow universal suffrage in the 2017 election of Hong Kong's chief executive.

Swire's editorial came in the midst of a heated debate in the territory about whether or not candidates who are critical of Beijing will be allowed to run for the highest office.

Beijing responded to the piece with swift attacks in the press. On Monday, Hong Lei, spokesman for the Foreign Ministry, denounced the remarks as “irresponsible,” and voiced Beijing’s “strong displeasure and resolute opposition." The nationalistic tabloid Global Times trotted out several articles attacking the “insidious purposes” of the UK and the US in trying to influence Hong Kong’s political future.

More from GlobalPost: The People's Republic of PR

China’s fierce reaction underscores the high stakes it sees in Hong Kong’s elections, which will likely be the freest ever to occur on Chinese soil.

For experts, the question is to what degree the Communist Party leadership can tolerate dissenting views.

"Will Beijing insist that it has the control of the list of candidates, that it has a kind of veto power on the nomination process?" asks Joseph Cheng, professor of politics at the City University of Hong Kong. "This is the whole focal point."

As Cheng points out, there’s a certain irony in seeing rankings-obsessed Hong Kong leaders complain about the outside world’s opinion of their city.

To Simon Young of the University of Hong Kong, it’s clear that China wants to draw a line against foreign governments expressing views on the city-state’s future, but that does not mean that it’s a foregone conclusion that Beijing will not be willing to allow substantial progress toward democracy.

“I still see everyone acting in good faith at this point. I still believe that there is still quite a divide that separates different political factions right now, but that’s to be expected. […] It could well be that opens the door to possible breakthrough compromise.”