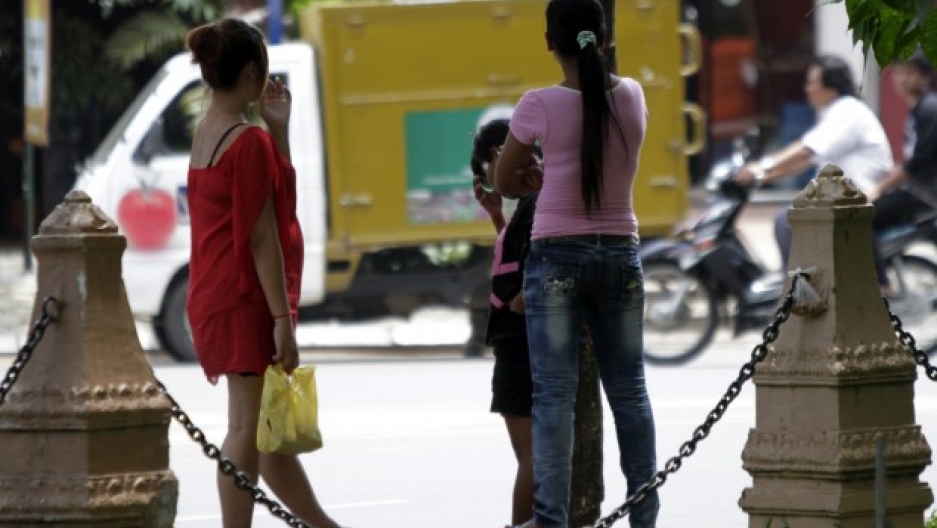 A quiet street away from Phnom Penh’s daytime bustle, Samnang is showing little sign of the aftereffects of an evening spent carousing at a local bar.

Bright-eyed and lively, he chats eagerly about his friends’ weekend plans.

“We go dancing and looking for girls,” he said. “It’s great. I like this kind of life. I don’t ever want to get old.”

At 24, Samnang looks like many Cambodian men his age, dressed in a fitted plaid shirt and skinny jeans. Samnang is not his real name; he’s only agreed to speak on the record if he's allowed to remain anonymous. He’s not shy, though, when asked about the first time he and his friends forced a woman to have sex.

“I went drinking and dancing at the club,” he said.

He met a woman there. She was a prostitute. They started chatting, and she agreed to come back to his rented room in return for $20.

“I wouldn’t have offered her such a high price if it was just me,” Samnang said. “But I didn’t tell her that.”

Instead, when they got back to his room, four of his friends were waiting — just as they had planned.

“When she saw that it was four of us, she refused,” he said. “So we offered her more money. And if she still refused to take the money and wanted to leave, we weren’t going to let her. Even if she didn’t want to have sex, she couldn’t have gone anywhere.”

What Samnang is describing is gang rape. But he doesn’t call it that, and he seems surprised when asked if what he’s doing is illegal.

“To be honest,” he said, “I’ve never thought about the law. All I’m thinking about is how I can make money and have sex.”

This carefree attitude toward rape has been troubling advocates in Cambodia trying to reduce violence against women. More than a decade ago, researchers turned up an unexpected phenomenon in interviews with young Cambodian men.

Some described gang rape scenarios as an almost casual activity. They even had a name for it — bauk —which translates as “plus” in the Khmer language.

“When they spoke about it, it wasn’t with any sense of embarrassment, or any sense of boasting,” said David Wilkinson, a consultant who led some of the first research detailing gang rape in Cambodia. “It was just a matter-of-fact thing, that this is what we do at weekends, the same way you or I would play football or cycle or whatever.”

Many appeared to see it as a form of male-bonding, mixing in bauk as part of their weekend revelry.

“They talk about a shared experience amongst friends; it’s something we do as a group or as a gang,” Wilkinson said. “One group of guys talk about my team go and do bauk. It wasn’t a football team it was just their group of friends.”

Much of the research on the subject in Cambodia has been snapshots of an emerging issue. Now, a United Nations study released recently attempts to quantify the prevalence of gang rape and other forms of violence against women in Asia–by talking with the men themselves. It reveals some startling statistics, by asking detailed questions about men’s backgrounds, their relationships, and their attitudes toward women.

Half of the 10,000 men surveyed in six Asia Pacific countries — Bangladesh, Cambodia, China, Indonesia, Papua New Guinea and Sri Lanka — admitted they had abused their partners, and one in four had committed rape.

The study also showed alarming levels of gang rape, with some of the highest levels found in Cambodia. Of the men surveyed here, more than five percent said they’d taken part in a gang rape — higher than the 2 percent typically seen in most of the other sites surveyed. Unique among the countries studied, gang rape was also more commonly reported than rape against a single non-partner.

Beyond the raw statistics, however, is potentially valuable information from the 10,000 men who took part in the survey.

James Lang is program coordinator with the group that released the study: Partners for Prevention, an umbrella group of UN agencies working on gender-based violence in Asia. He says the men’s attitudes captured in the study can be used to pinpoint the most crucial factors behind why men commit violence, and to design new programs and interventions to reduce them.

“One of our questions for the rape motivation was, ‘because I wanted to show her that I could. I wanted to prove that I’m a man by raping this woman,’” Lang said. “I think the sites where gang rape is quite high, this notion of male sexual performance is something we really need to dig in deeper around.”

Lang says the research reinforces the urgent need to scale up programs that question traditional concepts of masculinity. And with evidence showing rape is committed at a young age — half the men who admitted to rape here were under 20 when they raped for the first time; 16 percent were younger than 15 — there is also a need for such interventions to begin at an earlier age.

Ou Ratanak knows the pressures many young men are facing. When he was in university, he says his friends would talk about bauk, or gang rape. They wanted him to join in as well, but he refused.

“They said I’m not the real man. When you want to show someone that you are a real man, you have to join with them,” Ratanak said.

Now, Ratanak heads a local NGO, the People Health Development Association, which works with young people, especially men. In classrooms around the country, his organization holds debates, trying to get young people to challenge each other’s views of traditional gender roles.

While the problem of rape is serious, it’s not insurmountable, advocates say. Even if one-quarter of men surveyed in the UN study said they had raped, that also means that three-quarters did not.

“It’s not a natural condition for men to use violence against women,” said researcher James Lang. “The message is that violence is preventable.”

But it may be an uphill battle reaching people like Samnang, the 24-year-old man in Phnom Penh. When asked about the last time he and his friends forced a woman to have sex, he’s ready with an answer.

“It happened last night,” he said.