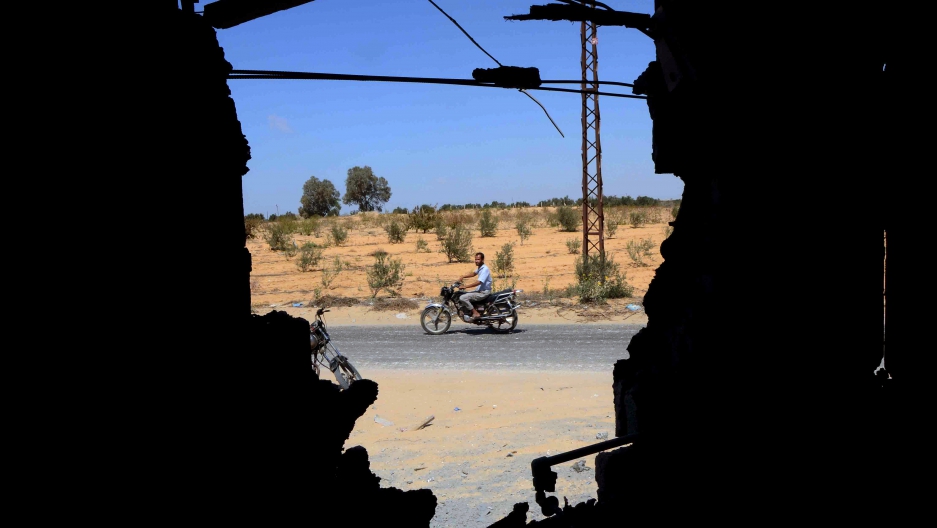 A man is seen riding his motorbike through a wall that was destroyed by an attack by Egyptian Army the day before in a village on the outskirt of the Northern Sinai town of Sheik Zuweid on September 10, 2013. A series of attacks in Egypt's restive Sinai Peninsula, mostly against soldiers, killed at least four people, security officials said. The violence comes as the Egyptian military presses its campaign in Sinai to quell an insurgency that surged after the army overthrew Islamist president Mohamed Morsi on July 3.
Credit: Mohamed El-Shahed
Share

SINAI PENINSULA, Egypt — Since Egypt's Defense Minister Abdel Fattah al-Sisi announced the ouster of President Mohamed Morsi on July 3, a ruthless wave of militant attacks has kicked off here in the northeastern corner of the lawless, rugged terrain of the Sinai Peninsula.

Along the Israeli-controlled border with the Sinai which runs up hard against Gaza, Egyptian government sources have reported a steady rise in attacks in recent weeks which have claimed 121 lives, including 69 military and police personnel. There have also been 321 injuries including 192 security forces.

North Sinai, the battlefield of multiple Egyptian-Israeli wars, the cornerstone of the Camp David Accords and Egypt's valuable but vulnerable trade and military terminal into Asia has become a last refuge for militant Islamist groups long targeted by the regime of toppled Egyptian president Hosni Mubarak, Hamas and Israel.

The casualty toll continues to rise as Sinai's most powerful Islamist militants, Ansar Bayt Al-Maqdis, or “Partisans of Jerusalem,” announced their responsibility for a failed assassination attempt on September 5, on Egypt's Interior Minister Gen. Mohamed Ibrahim by detonating a vehicle loaded with explosives in front of his house in eastern Cairo's Nasr City district.

They have also vowed to to continue their confrontation with the state and have openly vowed to assassinate Gen. Ibrahim, who to them is a representative of the ruthless emergency measures adopted by Egypt's security for decades, along with al-Sisi,who many say is effectively in charge of the interim government.

This wave of armed militancy in the Sinai is unprecedented here since Egypt's running conflict against Islamic militants in the 1990s, which reached a bloody crescendo in the Luxor Temple Massacre in 1997 when terrorist elements murdered 58 foreign tourists and 4 guards of the historic site in less than 45 minutes.

But Sinai's militancy didn’t come out of nowhere; the “Partisans of Jerusalem” and other armed factions have been recruiting, arming and preparing for an inevitable battle against the state since the January 2011 uprising that toppled Hosni Mubarak. Three decades of Mubarak’s police state had crumbled and left the northern part of Sinai a lawless land holding assets in tourism, busy shipping ports, a crucial highway and abundant natural gas pipelines that serve Egypt, the eastern Mediterranean countries including Israel.

A few days after Egypt's military had deployed to every city in Egypt in early 2011, while Mubarak was still resisting his inevitable departure, the North Sinai pipeline, which supplied Israel with natural gas covering 40 percent of its fuel consumption, was bombed on February 5.

Several bombings later, the same group that attempted the assassination of the interior minister two weeks ago, along with another named Majlis Shura Al-Mujahedeen — Aknaf Bait Al-Maqdis, or the Mujahedeen Shura Council — Environs of Jerusalem, announced their responsibility not only for the successful attacks on the pipeline but also for killing Israeli border security personnel.

The radical Islamist groups, which all stem from the southern Gaza town of Rafah, have exploited the restive relations between Sinai's Bedouin tribes and the Egyptian authorities, the lawlessness in which the peninsula was left, and the abundance of weapons stockpiled around the peninsula to escape the ruling Hamas which regularly clamped down on them for their constant opposition.

For 15 successful attacks on the pipeline through 2011 and 2012, attacks on the Israeli border patrols and in the southern Israeli city of Eilat, Egypt's authorities remained lax toward the assailants who declared themselves in online statements and crude footage showing their masked elements planting explosive packages and chanting victory slogans as the pipeline went up in flames.

Egyptian Ayman al-Zawahiri, al-Qaeda's leader who succeeded Osama bin Laden after a US Navy Seal team killed him in a raid last year, applauded the "bravery of Sinai's Mujahideen and their attacks on the Zionist entity."

And Egypt's interim ruling Supreme Council of the Armed Forces continued to sign release letter for hundreds of Islamists jailed for years by Hosni Mubarak's security apparatus, some of whom were personally involved in the bloodiest terrorist attacks Egypt has ever witnessed.

Meanwhile, the Libyan civil war erupted as the rebels sought an end to Muammar Gaddafi's dictatorship, and tons of weapons spilled over Egypt's western border and reached North Sinai where the tunnels into the Gaza Strip operated uninterruptedly, and the demand for weapons was soaring.

The Qassam Brigades, the military wing of the Gaza-ruling Hamas movement — the Palestinian branch of the Egyptian Muslim Brotherhood — militant groups like the Partisans of Jerusalem and outlawed Bedouins were top buyers of Gaddafi's arsenal and some of the NATO weapons fed to the Libyan rebels during the war.

By mid-2012, the northeastern quarter of Sinai, bordering the Gaza Strip, became the new and most welcoming haven for Islamist jihadists and Takfiri groups. The two most active groups, the Partisans of Jerusalem and the Mujahideen Shura Council, have fled the crackdowns of Hamas in their original strongholds in the southern part of the Gaza Strip along the Egyptian border.

But if Hamas' direct involvement in Egypt's post-2011 unrest and violent attacks isn’t proven, it is clear that it turned a blind eye on hundreds of Israel-loathing jihadists moving their strongholds to Egypt's volatile North Sinai through the tunnels licensed, monitored and taxed by the Hamas authorities.

As Gaza's Jihadist groups operated in their new enclave, the Sinai Salafist Jihadist Group had already built itself with the blessing of Sheikh Mohamed Zawahiri, the brother of al-Qaeda's chief, who was released in March 2011, under the interim SCAF. It became another umbrella for radicals pardoned by Mohamed Morsi's presidential decrees throughout his one year in power, and others who trashed the violence-renouncing ideological recantations they once adopted.

A few weeks into Morsi's one year in power, an attack on an Egyptian military border checkpoint in Rafah left 17 soldiers killed. And despite the state of shock over the unprecedented attack on the military, Egypt's authorities inexplicably seemed to make little progress in its attempts to maintain stability and gain control in Sinai.

Instead of unleashing a full-fledged security campaign in retaliation for the killings, Morsi resorted to negotiations with Sinai's militants through a panel of brotherhood top officers, Salafist figures and freshly released Islamists.

If Morsi's affiliation with Islamist radicals — whose acts once enabled him to dissolve the Supreme Council of the Armed Forces (SCAF) and sack Hosni Mubarak's top military men who ruled the country until his climb to power — isn’t proven yet, his negotiation policy granted legitimacy to the Islamist militancy.

In Sinai, no one is innocent of the intensifying security crisis. SCAF, Morsi, and the interim government currently fighting what could be another deadly phase in Egypt's modern history have all failed to resolve the peninsula's longstanding issues.

As analysts, lecturers and security experts stressed that impoverishment, illiteracy, marginalization and lack of infrastructure were the main conditions exploited by terrorist groups to brainwash and recruit elements in the 1990s, Sinai's population continued to live without potable water, viable schools or fully operational hospitals.

Over the past decade, Sinai's desperate Bedouin population turned to smuggling to make a living, growing accustomed to arbitrary detentions and the full application of the emergency law. They continued to buy potable water as their country, blessed with the Nile River, failed to extend the infrastructure to their towns and villages.

The most recent bloody events unfolding in the Sinai Peninsula and threatening Egypt's national security are a logical development and a compact version of sporadic attacks that continued over the past two and a half years.

Sinai continues to simmer, not only with explosives planted at the gates of military facilities and rocket propelled grenades fired at security checkpoints, but also with a resentful population that suffered decades of marginalization and grew disillusioned with the post-revolution governments that failed to bring change to their lives and failed to sympathize as they became the collateral damage of a war on terror that could continue for years.