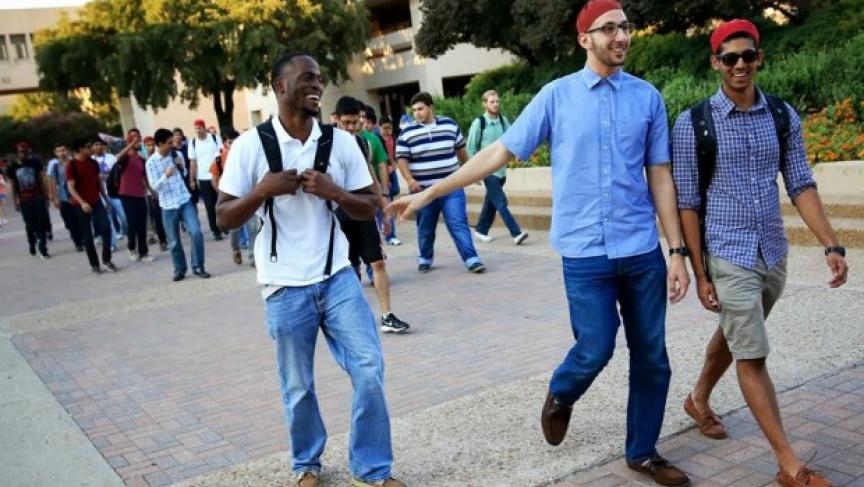 At many colleges and universities, fraternities are a major part of students’ lives. There is, of course, the “Animal House” reputation of many frats: drinking, excessive partying, womanizing, and even brutal hazing.

But Alpha Lambda Mu is different. It is, by all accounts, the first all-Muslim fraternity in the country. Ali Mahmoud, the fraternity’s founder, says it all started as kind of a joke between him and a friend. They were lamenting that there were no fraternities at the University of Texas at Dallas where they were likely to feel like they fit in as Muslims. Eventually, thought Mahmoud, why not start our own frat?

But how does he reconcile life as a frat brother with life as a Muslim?

“We do have to find a middle path,” Mahmoud told The World’s Marco Werman. “To the Muslims we’re not doing Muslim things, reading the Koran, doing ritualistic things.”

“And to the frat boys, we’re not really frat. We don’t get drunk, we don’t party, and we don’t run around naked slapping each other.”

At the end of the day, Mahmoud says, “we’re just trying to have fun.”

“We’re trying to help people, and trying to live as college students while being able to identify ourselves as Muslims. Sometimes, it’s just about being human.”

Marco Werman: Here’s another story about change. Boston, where this show is based, is one big college town, and with college back in session, I’ve been noticing the Greek letters again. I’m talking about the alphas and omegas of frat houses, not to mention their hijinks. Not all of them, but some. That’s the “Animal House” stereotype. At the University of Texas at Dallas, though, a frat called Alpha Lambda Mu is breaking Greek system stereotypes. That’s because it is, by all accounts, the first all-Muslim fraternity in the United States. Ali Mahmoud is the frat’s founder and president. He’s a junior majoring in biology and sociology. I asked him if it’s hard to reconcile life as a both a Muslim and a frat brother.

Ali Mahmoud: There’s a few stereotypes we have about fraternities. A lot of people think fraternities are just these white, elitist organizations that started up in the 19th century. But in reality, while there are a lot of fraternities that did come up and that do have a lot of partying and things like that that go on, there are a lot of cultural fraternities and service fraternities. There was a black fraternity that came up in the 20th century, a Jewish fraternity that came up in the 20th century. But we do have to find a middle path. To the Muslims we’re not doing Muslim things. We’re not going to the mosque and reading Koran, and we’re not, yeah, we’re praying together, but we’re not spending all our time doing ritualistic things. And to the frat boys, we’re not really a frat. We don’t party and we don’t get drunk, and we don’t run around naked slapping each other and things like that.

Werman: And you are doing service-oriented things. Tell us about some of the things you are actually doing locally.

Mahmoud: A few of the guys randomly went to West Texas after the explosion and delivered pillows and food.

Werman: At the fertilizer plant explosion.

Mahmoud: Right, at the fertilizer plant explosion in West Texas when that happened. Some other guys went up to Moore, Oklahoma after the tornadoes and helped clean up.

Werman: Ali, your parents are Egyptian, and I’d guess that many of your frat brothers have similar backgrounds. When you had the choice between doing local charity work and helping overseas, say sending some money to the refugee camps where Syrians are fleeing to, what’s that choice like? Do you have a discussion, is it a tough discussion?

Mahmoud: It’s not really a tough discussion at all. We usually try to help out at home as much as possible because that’s what’s within our reach. I mean, if we have people in our back yard that are starving, I think it’s a higher priority for us to help them.

Werman: I know life has been especially tough for Muslims since 9/11 and you’ve said before that the backlash, some of the backlash, has prompted you to be more defensive of your faith. Did founding a Muslim frat also seem like a good way to push back against negative stereotypes of Islam that you’ve seen since 9/11?

Mahmoud: I was in second grade when 9/11 happened, and for a lot of my life I’ve kind of had to tell people what Islam isn’t. I’ve had to tell them we’re not terrorists, we’re not misogynistic, we don’t hate our women, we don’t oppress people, and things like that, for my entire life. And getting this opportunity with the fraternity and getting this attention has given us all the opportunity to tell people, hey, this is what Islam is about, this is what we do. We like to help our communities, but we’re also college kids, you know. We like to mess around.

Werman: I gather the idea of a Muslim frat is spreading. A number of other universities are interested in starting their own chapters, including Cornell in New York, but there’s been some backlash as well. Do you know what’s going on there?

Mahmoud: So, like I said, because we’re traveling this weird path, we’ve just been getting fire from everybody. We’ve gotten fire from the Islamaphobes saying that we’re a sleeper cell, we’ve gotten fire from the super-progressive Muslims saying that we’re rooted in a white elitist organization that’s trying to take control of Islam and put on misogynistic ideals again. But we’re just, man, we’re just Muslim college kids just trying to have fun and get together without breaking the rules of our religion. I don’t understand these people, bro. Like seriously, we’re just trying to have fun, dude. We’re just trying to have fun, we’re trying to help people, and trying to just live as college students while being able to identify ourselves as Muslim. So it’s really, sometimes it’s just about being human.

Werman: Can I just say, Islam has some great robes, and I think you guys at Alpha Lambda Mu could really improve the toga party.

Mahmoud: You’re right. Actually, it’s funny, some of the guys have joked around. There’s a, when people go onto the Hajj, the pilgrimage, they have to wear these towels that kind of look like togas. So you never know. It’s called an ihram, so you never know, we might shave our heads and pull an ihram party instead of a toga party. You never know.

Werman: We’ll definitely see how things progress. Ali Mahmoud, founder and president of Alpha Lambda Mu, and all-Muslim fraternity at the University of Texas-Dallas. Thank you very much.

Mahmoud: Thank you very much, and if you don’t mind I’d like to give a shout out to my brothers who specially requested it. Alright, thank you guys, thank you Shahir, and Mo World, Mo Bush, Mo Kush, all you guys out there, thank you guys so much for listening in. I love you guys very much and I think this is going to be a fun, fun journey.