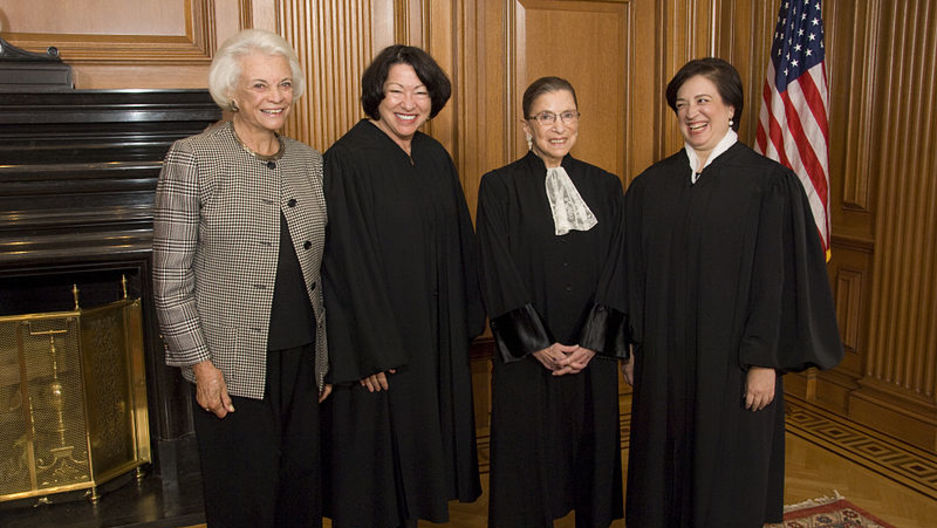 Ruth Bader Ginsburg, second from right, is one of three women currently sitting on the U.S. Supreme Court, with Elena Kagan, right, and Sonia Sotomayor, second from left. Former Justice Sandra Day O'Connor, left, was first. (Photo courtesy of the U.

In the decades before President Bill Clinton nominated Ruth Bader Ginsburg to the Supreme Court in 1993, Ginsburg quietly and strategically revolutionized Americans' understanding of women under the law.

"I didn't change the Constitution, the equality principle was there from the start," Ginsburg said. "I just was an advocate for seeing its full realization."

Ginsburg graduated first in her class from Columbia Law School in 1959, yet not one law firm offered her a job. She turned instead to academia, taught the country's first class on women and the law at Rutgers Law School, and eventually established the Women's Law Project at the American Civil Liberties Union in New York.

"I see my advocacy as part of an effort to make the equality principle everything the founders would have wanted it to be if they weren't held back by the society in which they lived," Ginsburg said.

In the 1960s and 1970s, American society changed radically at the same time Justice Ginsburg advanced her litigation career

"I don’t think my efforts would have succeeded had it not been for the women’s movement that was reviving in the United States and more or less all over the world at the time," she said.

By the 1970s, judges with daughters and granddaughters "began to recognize that some of, some of the so-called favors for women were not favors at all but they were locking women into a small piece of men’s wide world," Ginsburg said. "So it was the change in society that opened the Court's eyes and made my arguments palatable when they would not have been a generation before."

Though the members of the court normally decline to comment on current debates in Washington, Justice Ginsburg did speak broadly about the power of wartime presidents — as President Barack Obama and Congress debate U.S. military intervention in Syria.

While President Obama could take the lead in an intervention, Ginsburg notes Congress isn't powerless.

If the Congress does not act when the president exceeds his war powers authority, it offers "tacit approval" to the president, Ginsburg said.

"I think there’s a shared responsibility, whether Congress takes formal action or not, for when the United States is acting in the interest of national security," Ginsburg said.

National security has also been an issue related to technology, recently, in the wake of NSA contractor Edward Snowden's leaks to The Guaridan. Ginsburg said "there are just a host of problems born by the electronic age" — as in the 2012 case U.S. v. Jones.

In the case, the plaintiff, Antoine Jones, claimed the police attached a GPS tracker to his car, without his knowledge, and violated his constitutional rights to be free of unreasonable searches and seizure.

The court ruled in Jones' favor unanimously — with one justice's take on this case sticking out to Ginsburg.

"Justice Scalia imagines a constable clinging to the bottom of a carriage as it went on its way, so there was some notion that this similar, there is an official eye that’s on you, but you don’t know about it," she said. "Yes, there are all kinds of challenges."

Sooner or later, she pointed out, every controversy winds up in court.

"I think that’s a great, says great things about our judicial system," she added.

Ginsburg, 80 and having spent two decades on the court, is showing no signs of slowing down. She said she plans to work as long as her body will allow it.

"As long as I can do the work full steam, I will stay on the Court," she said. "But when I feel myself slipping, when I slow down in my ability to write opinions with fair dispatch, when I forget the names of cases that I once could recite at the drop of a hat, I will know."