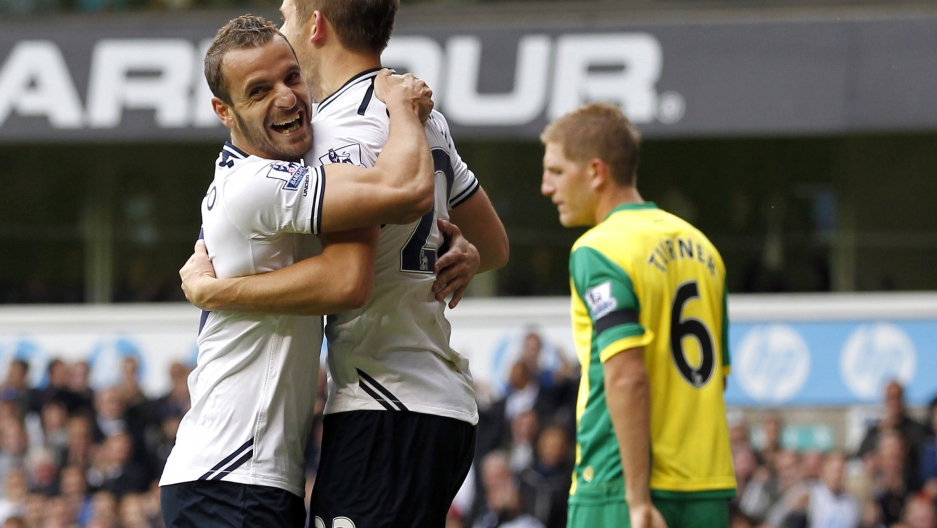 LONDON — A controversy is brewing in English soccer over the use of a very nasty word: Yid.

Tottenham Hotspur has long been considered a "Jewish" team. Now its fans are facing sanctions for using this term of anti-Semitic abuse in their chants.

The Football Association, the sport's governing body in England, issued a statement last week calling the chants "offensive” and “inappropriate."

The statement warned that “use of the term in a public setting could amount to a criminal offense, and leave those fans liable to prosecution and potentially a lengthy football banning order.”

In other words fans who chant "We are the Yids" or "Go Yiddoes" might be forbidden to attend football matches.

Tottenham fans are not happy.

"We never use the term in a malicious way," says Darren Alexander, Chairman of Tottenham Hotspur Supporters' Trust. "'Yid' for us is a call to arms. It's a badge of honor."

No one is quite sure how Spurs became identified as a "Jewish" team. Alexander thinks it might be that many fans traveling to White Hart Lane, the team's stadium had to pass through Stamford Hill, a Hasidic Jewish neighborhood. More than a few people from that community attended Spurs matches.

Whatever the origin, the aggressive anti-Semitic chanting labeling Spurs fans as Yids began in the 1970s when hooliganism erupted around English football.

"We decided to take that negative and turn it into a positive," explains Alexander.

Although most Spurs supporters aren't Jewish, Alexander is. He acknowledges being bullied at school because of his Jewishness. Shouting the epithet "Yid" back gives him a sense of pride.

The idea that there are Jewish teams or Catholic teams has a long tradition in England.

Their origins are unclear but they persist into the present even when they no longer refer to their original fan base. For example Spurs' biggest rivals are Arsenal, located a few miles away across north London. Arsenal are traditionally an "Irish" team.

But today Arsenal probably have more Jewish season ticket holders than Spurs. The primary business architects of the club's development into a leading international brand were Jewish.

In Manchester, Manchester City is the "Jewish" team (by coincidence they even play in the sky blue of the Israeli flag), Manchester United has massive Irish support. Today, City are owned by Abu Dhabi's Sheikh Mansour bin Zayed al Nahyan. United are owned Jewish businessman Malcolm Glazer of Florida, who also own the Tampa Bay Buccaneers. But they are still identified as the Jewish and Irish teams, respectively.

In continental Europe where there are virtually no Jews living, this identity game goes on. Ajax of Amsterdam has long been associated with Jewish support despite the fact that there are barely 15,000 Jews living in the city now, down from a Jewish population of 80,000 pre-Holocaust.

Fans of arch rival Feyenoord from Rotterdam, often taunt Ajax fans by making a hissing sound, meant to mimic gas being released into a gas chamber.

Similar kinds of unpleasantness surround Spurs matches. At one Arsenal-Spurs match I attended, I heard an Arsenal supporter say, "Hitler was right, should have thrown them in the ovens." It was not said in rough jest.

Many in the Jewish community outside of the Spurs supporters' groups do not like the way in which they use "Yid." The Board of Deputies of British Jews has come out in favor of the FA's proposed ban.

David Baddiel, a comedian and Chelsea supporter, has publicly criticized the Spurs group, saying their use of the term encourages anti-Semites among Chelsea fans to increase their abuse of Jews.

Of course, Chelsea's owner Roman Abramovich could do something about his team's supporters — he too is Jewish.

The Spurs supporters are consulting with lawyers and the club. They are also talking to each other in chat rooms and online forums.

Alexander doubts anything can be done. "Even if it (the word Yid) was banned, Anti-Semitic chants against us wouldn't stop."

This argument has a long way to run.