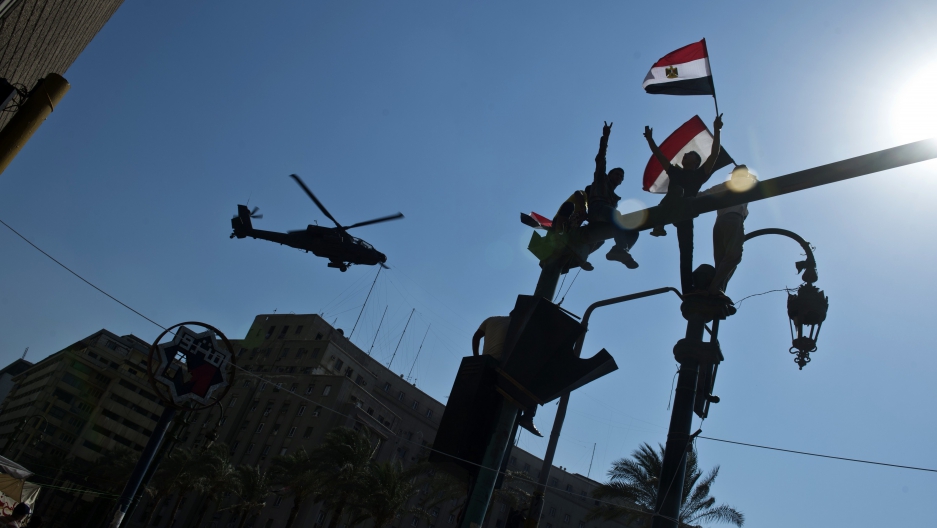 CAIRO — Amid the rise of General Abdel Fattah al-Sisi and the fall of the first democratically elected government in Egypt’s history, the military’s “deep state” has enshrined itself with a special status that will keep it immune from criticism or inspection and largely unanswerable to any civilian authority.

In short, the “deep state” is not going away any time soon and in many ways now runs ‘deeper’ through the core of the nation than it did even under the regime of deposed President Hosni Mubarak.

Here are four ways in which al-Sisi and the interim government appear to be further enshrining the “deep state” and why Egyptians and anyone in the world who cares about democracy should be concerned about this concentration of power:

1) Changing the army's creed and loyalty

Since the military appointed President of the Constitutional Court Adly Mansour as an interim president for Egypt last July, he issued two presidential decrees regarding the military.

The first decree was to increase the salaries of soldiers and pensions of retired officers, which is the second time military personnel received raises since the January 25 Revolution. President Mohamed Morsi, who was removed from power in July and remains in detention at an undisclosed location, took a similar decision at the beginning of his presidential term when he was working closely with the military leadership.

The second decree, issued in July, was known as “Number 562” and it change the military oath that officers recite during their graduation from the military school.

This new oath obliterated a longstanding phrase in the previous oath that bound officers to be "loyal to the president of the republic."

Future graduates of the military school will swear to protect the safety of Egypt inside and outside its lands, and to "obey the military orders, and execute the orders of the commanders." In other words, the military’s loyalty to the executive branch of a civilian government has been stripped away.

This stunning shift in loyalty by the military either went ignored by the Egyptian state-run media or was praised in print and on broadcast news. The reports often cite military experts who claim that the new oath is aimed to strengthen the loyalty of army to the country itself and its supreme interests, not to a certain individual.

Although the new oath emphasizes obedience to military orders and commanders, and ignores any subordination to a civilian authority, most Egyptians didn't realize the grave implications hidden in the semantics.

The corrupt regime of Mubarak and the failed presidency of Morsi have tarnished the image of civilian government and its authority in the eyes of the public. And both of these leaders, Mubarak and Morsi, served to strengthen the role of the military, to entitle it to become an economic powerhouse and to simultaneously shield it from civilian review. As a result, citizens of Egypt are skeptical of their elected government leaders while the popularity of the military is on the rise. Polling in Egypt consistently confirms that the military is by far the most trusted institution in the country.

The extraordinary pace of history unfolding in the last two and a half years seem to have blinded many Egyptians to the fact that a civilian president should be the only lawful representative to their collective will, and that the submission of the armed forces to a democratically elected leader is the only guarantee to keep a rogue general from abusing his power to enforce a political agenda.

Here is a hypothetical scenario that all Egyptians should consider given the vast economic empire over which the military presides: Imagine decades down the road, that Egypt will be ruled by a popular, powerful, civilian-elected president, who seeks to tame the enormous military budget. Specifically, how it should be allocated and whether the military should be investing in banquet halls, hotels and other civilian businesses.

When this hypothetical president tries to enforce any reforms in the military, he is going to be faced by three generations of army generals and commanders who were indoctrinated from their first day in training to be loyal to the military and its interests, not to a civilian authority. This will likely lead to a fierce political confrontation, or quite possibly another military coup to replace an elected leader.

2) Constitutional immunity for the military

In July 2012, interim President Mansour appointed a committee of 10 members to suggest amendments to the Egyptian constitution.

The job of the committee was to submit guidelines to be considered later by a larger committee before putting the constitution on referendum.

The committee of 10 proposed an extremely dangerous amendment to the article regarding appointing the defense minister. The article states, "The minister of defense is the general commander of the armed forces, chosen from its officers, after the approval of the Supreme Council of Armed Forces."

While it was always a tradition for a general to serve as defense minister, now it was enshrined in law. The underlined proposed amendment strips any elected president from having full authority over the military, and deeply enforces the military agenda of keeping its independence from the civilian government.

So far, the larger constitutional committee of 50 members has not publicly debated this amendment, but the military is pressuring the committee to pass it. And given the structure of the interim government in the aftermath of this summer’s events, most political analysts believe it stands a good chance of passing. If it does, it will fundamentally change the balance of power between military and presidency, effectively making the military an autonomous authority.

Another constitutional weapon added to the army's arsenal is its current effort to keep intact an article that gives it the right to put civilians on trial "for crimes that harm the armed forces." This is the same law under which the military put thousands of protesters before military tribunals during the last two and a half years.

The latest defendant brought before these military trials is the award-winning journalist Ahmed Abu Draa. He was accused of publishing false news about the army, days after he posted on Facebook that the military is giving inaccurate account on the death toll and civilian casualties of its operations in Sinai.

But the consequences of this article extend to any dispute between a civilian and a military officer.

Two weeks ago, a popular soccer player was summoned by a military persecutor after a trivial street fight with an army officer.

Luckily for him, the case was settled before it went to court, but it shows how the constitution creates a new social strata formed exclusively by military personnel who are untouchable and immune to any civilian system, even in matters that is not related to their work.

3) The army's own private economy

It is still not known for sure how much of the Egyptian economy the military controls. But projections based on solid data indicated the military may control as much as 40 percent of the total economy.

Perhaps nothing made that economic dominance of the military more clear than July 2012, when the military ‘donated’ $50 million dollars (300 million Egyptian pounds) to a bank account established by businessmen to simulate the Egyptian economy. It was essentially a kind of public relations stunt by the military to appear to be helping the collapsing Egyptian economy in the wake of the January 25 Revolution.

In August, the army made another form of ‘donation’ to the country it is supposed to serve. The military decided to renovate all the burnt and destroyed churches during sectarian clashes, Rabaa al-Adawiya Mosque, and all government buildings harmed during clashes, and to do so at its own expense.

These donations were praised by local media as a proof of the army's generosity, and helped to enforce the army's image as the guardian and savior of the state. Many analysts also saw it as an attempt to ameliorate the tarnishing of the military’s image that came after a brutal crack down on Christian protesters that left 29 people dead at the Maspero television center.

It is very unsettling to be thankful for military ‘donations,’ as if the military is a foreign aid organization or a private charity, while ignoring the army's economic empire that is totally unwatched, unsupervised and untaxed.

4) Army as the custodian of the state's religion

In its self-declared war against militant Islamists, the Egyptian military is now fighting in the name of God and borrowing some of the same language of their assumed enemy and turning it against them.

Gen. al-Sisi claimed in a speech last August that "we [the army] are more assiduous to Islam [than terrorists or Muslim Brotherhood].”

In numerous occasions, the army defended its actions through religious propaganda, and has sought to present itself as the true representative of Islamic faith.

This rhetoric paves the way for Egypt to have an army that applies the oppressive tactics of both a theocratic rule and a military rule. So a powerful question to ask in these uncertain days is whether the army be entrusted to establish and protect a modern secular state, while it justifies killing opponents in the name of religion?

More importantly, Egypt needs to ask itself what it has created in the rise of Gen. al-Sisi and whether the unintentional result of such religious rhetoric in a military context will give rise to a military commander who aspires to assume not only military authority but religious authority as well.

EDITOR’S NOTE: This analysis was written by an Egyptian investigative journalist who has reported on the military for years. But these days he said he fears arrest if the piece appeared under his byline. That fear says a great deal about the very culture of intimidation that the author reports the military is enshrining. So GlobalPost agreed to publish this analysis using only his middle name to protect his identity.