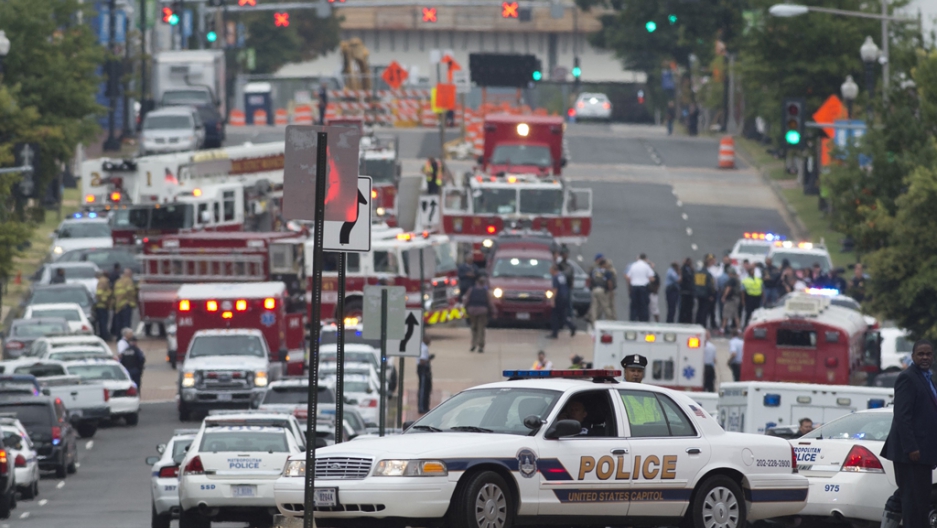 Police and firefighters respond to the report of a shooting at the Navy Yard in Washington, D.C., September 16, 2013.
Credit: SAUL LOEB
Share
#reactionDiv_gig_containerParent {display:none;}

This live blog is now closed. Check here for the latest developments.

Aaron Alexis, the gunmen who was killed at the Navy Yard shooting, died after a "running gunbattle" with police, according to the Associated Press.

"A former Navy man launched an attack Monday morning inside a building at the Washington Navy Yard, spraying gunfire on office workers in the cafeteria and in the hallway at the heavily secured installation, authorities said."

As of Monday evening, authorities were still on the look out for a second possible suspect, wearing a military style uniform.

There were many conflicting details, as the AP noted:

"Witnesses described a gunman opening fire from a fourth-floor overlook, aiming down on people in the cafeteria on the main floor. Others said a gunman fired at them in a third-floor hallway. It was not clear whether the witnesses on different floors were describing the same gunman."

More information on the dead gunman

FBI Assistant Director Valerie Parlave called for anyone with more information on Aaron Alexis, the deceased gunman, to contact the FBI. She said, "No piece of information is too small. We are looking to learn everything we can about his recent movements."

"Military personnel records show that Alexis spent nearly four years in the Navy as a full-time reservist from May 2007 until he was discharged in January 2011, according to a summary of his personnel records released by Navy officials at the Pentagon."

"Alexis, whose home of record is listed as New York City, was a Navy aviation electrician's mate 3rd class. From February 1 2008 until his detachment from the Navy on January 31 2011, Alexis was assigned to Fleet Logistics Support Squadron (VR) 46, in Fort Worth, Texas. Numerous media reports cited a gun-related arrest for Alexis in Forth Worth in 2010."

"According to a Navy document, Alexis is not listed as having served overseas, but is listed as receiving the National Defense Service Medal and the Global War on Terrorism Service Medal."

DC Mayor Vincent Gray spoke at a press conference a little after 4 p.m., saying one of the two suspects had been ruled out after talking to law enforcement officials.

He said, "We don't know what the motive is at this stage. We don't have any reason to suspect terrorism." Though he clarified that it had not been ruled out.

DC Police Chief Cathy Lanier said a "shelter in place" was still in effect for businesses and residences in the area.

The FBI confirmed the identity of the deceased shooter, 34-year-old Aaron Alexis, and asked for anyone with further information to call 1-800-CALL-FBI.

The death toll, including the gunman, is 13, and the mayor said a dozen or more were wounded, some for reasons other than being shot.

All three injured are in stable condition

At a press conference, Janis Orlowski, the chief medical officer for Washington Hospital Center, said all the three injured were expected to make full recoveries and were in stable condition.

She said one of the three was a police officer and the other two were civilians. Two of the injured were in surgery, while the third "very lucky" victim was only grazed by a bullet and was receiving treatment at the hospital.

She said none of the fatalities from the shooting were brought to the hospital.

NBC News showed this photo of the gunman who is deceased:

He was reportedly 34 years old and a native of Texas.

Defense Sec. Hagel: 'This is a tragic day for the Department of Defense, the national capital area, and the nation.' pic.twitter.com/m0Sm5BrAL3

Journalists from CBS and NYTimes reporting Senate is in lockdown:

And… The Senate just went into lockdown.

Per Senate lockdown, no one can enter/exit the complex for the next two hours — No danger, just "out of an abudance of caution.:

Senate put into lockdown "in light of uncertainty surrounding shooting at the Navy Yard...& possibility of suspects remaining at large.

The list of suspects still at large drops to 1

Police said they were no longer looking for a man in a tan uniform:

The white male in the tan outfit has been identified and is not a suspect or person of interest.

Earlier, DC police chief Cathy Lanier said the police were looking for two suspects in addition to the deceased, now identified by NBC, CBS and USA Today as Aaron Alexis.

The latest update leaves one possible suspect still at large.

Authorities are still searching for two other men they believe may have been accomplices in the shooting. Metropolitan Police Chief Cathy Lanier described them as one white male, armed with a hand gun and dressed in a khaki military-style outfit, and one black male in his 50s, armed with a long gun and possibly dressed in an olive military-style outfit.

In the United States, it's another day, another shooting.

This time a gunman, or possibly gunmen, opened fire at a US Navy Yard in Washington, DC. Details on who was responsible and their motive remain scarce.

But the United States is no stranger to deadly shooting massacres. Here's a look at some of the most tragic, from Virginia Tech to Newtown.

Gunmen killed at least 12 people Monday at a US Navy Yard in Washington, DC, the city's police chief said in a press conference.

Metropolitan Police Chief Cathy Lanier confirmed that one shooter was deceased, but added there were potentially two more shooters still at large.

Janis Orlowski, chief medical officer at the Washington Hospital Center, said the hospital was treating three victims, including one officer and two civilians. The hospital was also told to expect more.

US President Barack Obama, who was briefed on the situation, said, "We are confronting yet another mass shooting."

He praised the "patriots" working to protect "all of us," saying they faced "unimaginable violence they wouldn't have expected here at home."

Obama said, "I’ve made it clear to my team that I want the investigation to be seamless so that federal and local authorities are working together." He added that "whoever carried out this cowardly act" would be held responsible.

The Navy said that police had entered building number 197 in search of the shooter. The Navy said at least three shots were fired at 8:20 a.m. in the headquarters building of the Naval Sea Systems Command.

Does not look good. RT @timjhogan Another photo from the scene. Our staff is safe. #NavyYardShooting pic.twitter.com/FteTYLM6m1

The White House issued a statement on the situation Monday morning:

"The President has been briefed several times about the unfolding situation at the Washington Navy Yard by Assistant to the President for Homeland Security and Counterterrorism Lisa Monaco and Deputy Chief of Staff Alyssa Mastromanaco. The President directed his team to stay in touch with our federal partners, including the Navy and FBI, as well as the local officials. We urge citizens to listen to the authorities and follow directions from the first responders on site."

About 3,000 people work at the headquarters, which is responsible for building and buying US warships and combat systems, the navy said.

Rick Mason, a civilian who works with the Navy, said a gunman was shooting from an overlook on the fourth floor, according to the AP. "He said the gunman was aiming down at people in the building's cafeteria on the first floor."

If you live or work in Navy Yard area, please shelter in place until situation is cleared.

Outside the Navy Yard shooting.. pic.twitter.com/dqXcixaXLI

Photo: Helicopter pulls what appears to be shooting victim up as it hovers over roof on Navy Yard campus (Reuters) pic.twitter.com/vlkj9gZcig

The AP had this video of someone being airlifted from the scene: