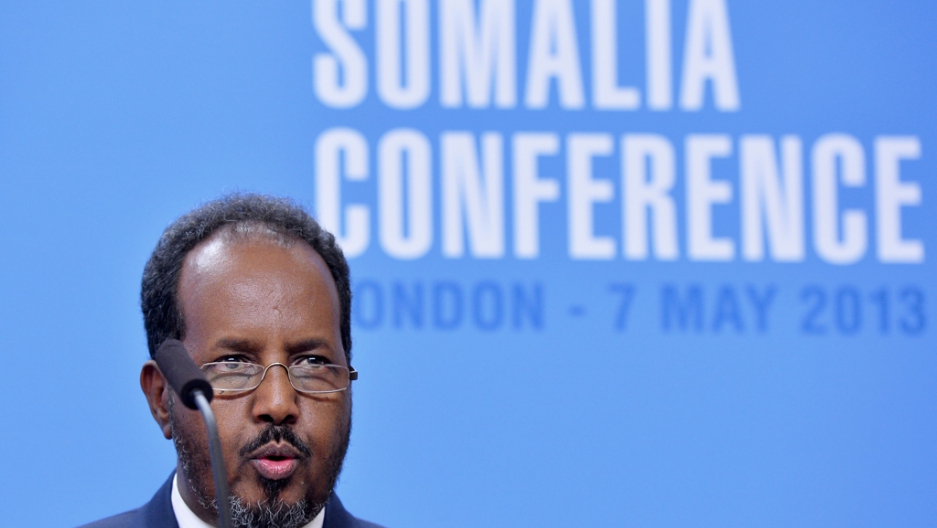 MOGADISHU, Somalia — This was the year Somalia was meant to ditch its reputation as the world’s leading failed state, marking the end of a political transition period aimed at establishing civilian rule.

But despite international backing for the government against Al Qaeda-affiliated militants, and the presence of nearly 18,000 African Union peacekeeping troops (AMISOM), serious progress has been elusive.

Somalia's president, Mohamud, marks one year in office on Sept. 16, and spoke with GlobalPost in a recent interview.

“When I started everything was a priority, urgent,” Mohamud, 57, said during the interview in his office at Villa Somalia, the fortified hilltop district where most government business is done.

His work at the beginning "was really sort of like firefighting," he said. "Crisis here, put it down. Another crisis there. So we started with crises and a very limited capacity to address those issues,” he said.

He was, as one Western diplomat in the region put it, “dealt a bad hand.” The previous government of Sheikh Sharif Sheikh Ahmed was stymied by infighting, notoriously corrupt and seemingly uninterested in fixing Somalia.

Nonetheless, progress under Mohamud “has been painstakingly slow,” according to the Institute of Security Studies, a South African think tank.

In a recent paper for the DC-based Center for Strategic and International Studies, analyst Matt Bryden described Mohamud’s government as “frail and embattled, dependent upon African Union troops to protect its leaders and defend its sovereignty.”

The government has little control beyond the capital, which exists in “a surreal bubble of optimism,” Bryden writes.

Mohamud’s foreign backers — the United States, UN, European Union and others — welcomed his election a year ago ending the long and difficult “transition” from war to peace. The US has recognized his government, as has the International Monetary Fund, and a handful of embassies are reopening.

The hope is that he will set Somalia on a course toward stability and democracy with national elections due in 2016.

More from GlobalPost: Inside Somalia: Life in Hell

Mohamud has his work cut out for him before then. He insists “security is priority number one,” but militant violence is worse than it was a year ago in Mogadishu.

In August 2011, Al Shabaab — whose militants were once part of a movement that ruled Somalia in 2006 — were forced to withdraw from the capital and other towns as AMISOM and Somali troops advanced on their fighters.

But the last big victory for the armed forces was nearly a year ago when Al Shabaab fled the key southern port city of Kismayo, after which the offensive stalled. AMISOM head Mahamat Saleh Annadif blamed a lack of troops and said there have been no “significant military operations” since March.

With the pressure off, Al Shabaab has launched an asymmetric war to great and deadly success, most recently with both a car and suicide bombing of a popular Mogadishu restaurant that killed 18 people earlier this month.

“From the point of view of ordinary residents security has deteriorated,” said Abdi Aynte, director of the Heritage Institute think tank in Mogadishu. “Yes Al Shabaab controls less towns but their presence and activities are now felt more acutely than before.”

AMISOM’s presence is a quandary for Mohamud: its soldiers guarantee the government’s survival but the presence of foreign troops — from Uganda, Burundi, Kenya, Djibouti and Sierra Leone — plays into the hands of Al Shabaab which rallies religious and nationalist support by portraying them as Christian invaders.

“Prolonged AMISOM presence can be a rallying cry for Al Shabaab," Mohamud said. "The solution to that is to rebuild our national army."

Constructing a national army from former child soldiers, clan gunmen and elderly veterans will be a long and difficult process and Mohamud blamed a 1992 UN arms embargo, which was partially lifted in March, for the lack of progress.

“Since I came, we have trained around 4,000 soldiers. All of them are sitting here idly because they do not have rifles or ammunition to fight,” he said.

Somalia’s myriad security and political problems come together in Kismayo where Ahmed Madobe, a clan militia leader, took control of the lucrative port and declared himself president in May in open defiance of Mogadishu’s authority.

The standoff threatened to undermine Mohamud’s administration and send Somalia back to the bloody days of anarchic clan battles over the country's resources.

The agreement is Mohamud’s most significant achievement to date and “a positive sign of a more inclusive politics,” said Aynte.

It also may indicate what Somalia may need to do in order to finally emerge as a functioning nation-state — move toward some sort of federalist system.

“Nobody wants an overly centralized government that keeps power in Mogadishu,” said Aynte, whose think tank has conducted wide-ranging surveys on the subject.

But while many Somalia watchers agree that federalism is the answer, no one can really decide what form it should take.

Regional administrations like Madobe’s want something closer to independence, while the government in Mogadishu is keen to hold on to as much power as possible

“The type and structure of the state is a thorny issue,” said Mohamud. “Today, it’s Ahmed Madobe, tomorrow another one will come, then another one — until we resolve this issue [of federalism]. But it must be resolved through political dialogue not the military."