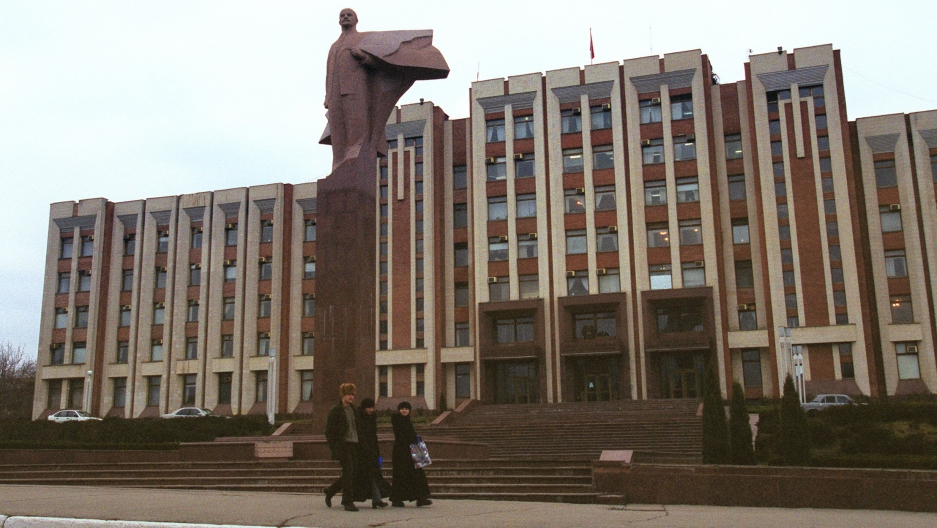 TIRASPOL, Moldova — You’d be forgiven for mistaking this city of around 135,000 people in the east of the country for a provincial Russian settlement.

In summer, Russian-speaking locals lazily stroll along cracked sidewalks past a statue of Soviet cosmonaut Yuri Gagarin and a billboard celebrating the city’s dour-faced “honorary residents,” most of them bureaucrats and military men.

More than 20 years after local separatists wrested this industrialized strip of land between the Dnestr River and Ukraine from Moldovan control shortly after the collapse of the Soviet Union in 1991, the breakaway Pridnestrovian Moldovan Republic — otherwise known by its Moldovan name, Transnistria — has been kept afloat by economic and political support from Russia.

It also maintains a peacekeeping force of more than 1,000 troops here, a vestige of the brief, bloody war in 1992 that resulted in a resounding Moldovan loss.

Russia now counts Transnistria as its de-facto outpost on Europe’s doorstep — and its 500,000 or so residents, around two-thirds of whom are ethnic Russians and Ukrainians, as its own.

“When Moldovans come to Moscow for work, they’re foreigners, like Tajiks or Uzbeks. But when Transnistrians arrive, they’re at home,” boasts Valery Litskai, a former diplomat who served as the region’s foreign minister from 1991 until 2008.

“If you’re a Transnistrian, you’re seen as part of the Russian civilization.”

The republic has all the trappings of modern statehood: a flag, an anthem, a government and local currency. It also has overwhelming popular support: only around 8 percent of the population wants reintegration with Moldova. Many Transnistrians count on formally integrating with Russia someday.

Government propaganda encourages such proclivities. Towering billboards glorify the “country” and its “capital,” as if to reassure citizens their state actually exists.

In fact, Transnistria remains in diplomatic limbo, the subject of a two-decade-long effort by Western officials to resolve one of the former Soviet Union’s “frozen” conflicts.

Not even Russia recognizes the self-proclaimed republic as independent.

But keeping the region politically and economically reliant on Moscow, experts say, helps stymie Moldova’s European integration and sends the message that the impoverished post-Soviet country should remain in Russia’s orbit.

The Kremlin has underscored its intentions by naming Deputy Prime Minister Dmitry Rogozin, a nationalist hawk in charge of Russia’s military industrial complex, as its special representative to Transnistria.

On a visit last week, Rogozin reaffirmed Russia’s status as Transnistria's “guarantor” and warned Moldovan officials that their pro-European drive would inflame divisions along the Dnestr.

On the economic front, Kremlin-connected businessmen control some of the region’s top assets, including a steel mill and a power plant that account for the lion’s share of the local economy.

Those industries funnel Russian gas to Moldova and leave Chisinau, as the sole recognized customer, to pick up the tab of nearly $4 billion, researchers estimate. According to a report last year by the European Council on Foreign Relations, Transnistrian authorities sell the gas they receive to local enterprises and use the funds to fill state coffers.

Such activities are aimed at maintaining the loyalty of a region with outsize importance for Moscow.

“Transnistria’s greatest value to Russia is in providing a source of leverage within Moldova,” the report said.

But a moment of reckoning may be fast approaching. With Moldova only months away from signing key agreements with the EU, the region’s resolve will be tested.

For years, Transnistria has gotten away with sending more than 40 percent of its exports — mostly steel and textiles — to the European market under a favorable trade regime. But after Moldova initials a Deep and Comprehensive Free Trade Agreement (DCFTA) with the EU in November, that privilege will soon end and Transnistria will be subjected to crippling tariffs.

“That will result in major losses for the Transnistrian economy, which could also lead to negative social effects,” says local political analyst Sergey Shirokov, a former member of the foreign ministry’s negotiating team.

It could also leave the region even more beholden to Moscow, which may be just what the Kremlin wants.

Local officials know the score when it comes to Russia.

“We can’t close our eyes and forget the Dnestr River flows through here and that Chisinau is 70 kilometers away,” he says. “That in itself presents a challenge for Transnistrian statehood.”

Litskai, the former foreign minister, is more frank. He speaks of a “geopolitical competition” between the European Union and Russia in which Transnistria is “a stadium.”

More from GlobalPost: Game, set and match to Putin?

For Russia, he says, that competition is a zero-sum game of soft and hard power diplomacy the Kremlin isn’t prepared to lose.

Sitting in an uncharacteristically posh café near one of Tiraspol’s dusty outdoor markets, Litskai points across the street. Russian donors have poured $100 million into building a new hospital “just to show the Moldovans they can build it.”

“Russia follows everything very closely,” Litskai says. “It won’t allow a disruption of the balance.”