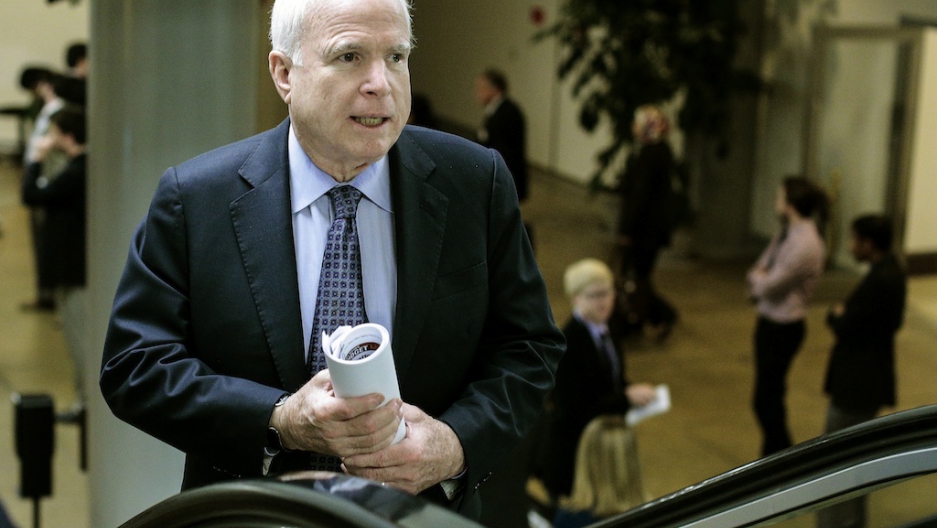 US Sen. John McCain may be penning an article for Russia's Pravda publication, but it's not what you might think.

McCain's hypothetical editorial on US military action in Syria — already generating buzz in the United States — is reportedly set to appear on the Pravda.ru website.

It will not, however, run in the pages of the Communist Party's official organ. That's because Pravda (the printed newspaper, try to keep up), has said they've heard nothing about the scheme.

Let's try to sort this out, shall we?

The kerfuffle began when Foreign Policy's John Hudson said he'd sent Pravda a transcript of a McCain interview on CNN, in which the senator and former presidential candidate said jokingly that he'd be open to writing for the Russian news outlet.

McCain was likely referencing Russian President Vladimir Putin's recent op-ed on Syria in The New York Times, which tsk-tsked the US propensity for "brute force."

Hudson said in his piece that he called McCain out on the offer, and McCain's people agreed that they'd get the hawkish senator to pen the editorial. The Pravda website editor gave assent to the idea as well.

Unfortunately, it seems as if many observers and journalists alike have confused the Pravda newspaper — an official Communist party publication that has been around since 1918 — with the Pravda.ru website, which was founded by journalists who split off from the print edition of the paper years ago.

And the old guard is not happy about this state of affairs.

"There is only one Pravda in Russia, it is the organ of the Communist Party, and we have heard nothing about the intentions of the Republican senator," said Pravda newspaper editor Boris Komotsky on the Communist Party of the Russian Federation website, according to AFP. (You can view the statement here in Russian.)

CPRF leader Gennady Zyuganov added, again via an AFP translation, "it is surprising that McCain did not bother to inform either the leadership of the party or the editors of Pravda," and added his paper would only print such a piece if McCain supported Russia's views on Syria.

Hudson told GlobalPost he initially wrote in Foreign Policy that the piece would be published in a print edition of Pravda.ru, realizing the error after Pravda.ru editor Dmitry Sudakov informed him that his publication was online only.

Some took the original version of the Foreign Policy piece to mean that the editorial would be published in the Pravda newspaper. And there our confusion began.

The current version of the Foreign Policy piece by Hudson makes the distinction between the printed newspaper and the separate website very clear.

Prior to the correction, however, many other publications had already repeated that the McCain editorial would be a published piece in the Pravda newspaper, fueling confusion and evoking images of Red Square, Lenin and newsprint, not online editorials.

Just to add to this Gordian knot of a media mix-up, Pravda.ru and the CPRF both claim to be the true successors to the print edition of the Soviet-era newspaper, a schism that began after the old Pravda split into three parts in the 1990s. Both publications are also staunchly anti-Western.

Will a McCain editorial actually ever appear in... some... incarnation of Pravda? Watch this space.