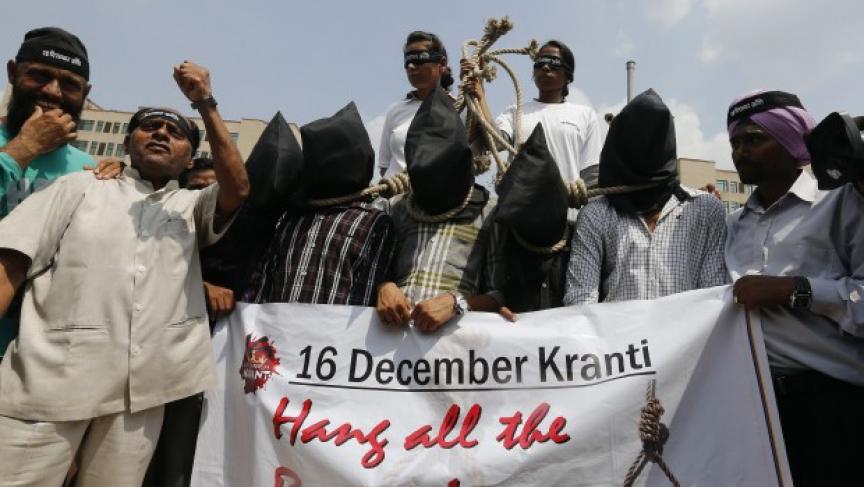 Protest outside a court in New Delhi September 10, 2013. Four men were found guilty on Tuesday of the gang rape and murder of a 23-year-old woman in New Delhi last year

A New Delhi court on Friday handed down the death sentence to four men convicted of committing a brutal gang rape and murder of a 23-year-old woman in December. Protesters, who regularly demanded that the men be hanged during the trial, rejoiced at the decision. The case had galvanized movements against sexual violence in India and resulted in rallies and campaigns against impunity for rapists.

But Dean Peacock, executive director of the South African organization Sonke Gender Justice, says that while calling for the death penalty is understandable in so gruesome a case, it is not the most effective deterrent to future violence against women.

"The notion that violence is how you solve these problems is part of the problem. The sense of outrage needs to be channeled," Peacock says. "My fear is that there will be an outpouring of grief and rage at the moment but it won't translate into strategic demands being made."

Peacock draws parallels between the Delhi case and two other high-profile cases of violence against women in South Africa. 17-year-old Anene Booysen was raped, mutilated and murdered outside Cape Town in Januaryand South African athlete Oscar Pistorius will face trial for the February murder of his girlfriend Reeva Steenkamp. While it is important for the criminal justice system to prosecute these cases, the pervasive nature of violence against women calls for a more complete solution, he says.

Peacock spoke with me by phone from a conference in England. Here is a transcript of our conversation, edited for length and clarity.

Does the severe punishment of perpetrators help reduce sexual violence?

To call for the death penalty, I think is understandable but misplaced. It's easy to understand that some people would imagine that very harsh punishment would deal with the problem of sexual violence. But what we know about the death penalty is that it's not a particularly useful deterrent for nearly any crimes.

We do know something about what is effective in decreasing and preventing gender-based violence: Ensuring boys and girls complete education, particularly secondary education, decreases the likelihood that girls will become victims and that boys will become perpetrators of gender-based violence. There's very strong evidence that suggests that boys who grow up in homes where they are exposed to domestic violence or harsh physical punishment are much more likely to themselves become perpetrators of multiple forms of violence.

What kinds of programs, then, can deter sexual violence?

Women are much more likely to experience domestic and sexual violence in societies that treat men's violence against women as a normal part of gender relations. So we need to implement national campaigns that challenge the gender norms that give men a sense of entitlement to use violence against women and, importantly, deter people from speaking out against domestic and sexual violence.

The case of the young woman in Delhi is, in fact, unusual in that the perpetrators were unknown to her. The crimes that these men perpetrated were exceptionally gruesome. They injured her catastrophically.

But a study that Partners for Prevention produced in Asia [ED Note: Here's the study (PDF)] looks a lot like the research that the South African Medical Research Council produced in 2009 [ED Note: Here's the research (PDF)]. In the MRC study, over 40 percent of South African men said that they had committed an act of domestic violence in their lifetime and fully a quarter of men said they had committed an act of rape. The world over, you can see pretty high numbers of men who self-report their use of violence against women.

But we can't rely on the criminal justice system by itself. It happens after the fact -- we want to stop the violence before it happens. In places like the US and the UK, where there have been effective preventative responses to sexual violence, they have involved multiple sectors of society. The education department makes sure social norms are challenged in school. In South Africa, our public broadcaster does quite a lot of work to challenge the types of gender norms that contribute to men's violence against women.

Does the anger around the sentencing of the men convicted in the Delhi gang rape and murder help the cause of ending violence against women?

In some ways the whole conversation around harsher physical punishment for these four men is a bit of a red herring. What we need is a commitment from the government that responds to this problem over the long term. It's too easy to say that these men were exceptions and we've now punished them. We know that's not the case. These men are exceptions only in the severity of the crime that they committed. Domestic and sexual violence remain an all-too-frequent reality for women in South Africa, India, the UK, and wherever you are.

Part of what the situations in Delhi and South Africa demands is that governments do more than the symbolic. Convicting these men in a timely manner is really important, but it's not sufficient. If we want to challenge the social norms that grant men the sense of entitlement to commit these acts and silence those who are concerned, and create a huge pool of people who are indifferent, we really do need a comprehensive social response, led by the only actor that has the resources and power to do so effectively. It's got to be the government.

The Booysen and Pistorious cases galvanized strong reactions but not like Delhi, where a good number of protesters were men. Everyone was surprised by those images of men in a very patriarchal society choosing to step forward and in some cases to put their bodies on the line -- being tear gassed and sprayed with water canons -- alongside women. That didn't happen in South Africa. Mostly it was a response by NGOs and media.

The political will for meaningful responses has to be sustained over time, both among the people who demand it and those who are tasked with implementing it.