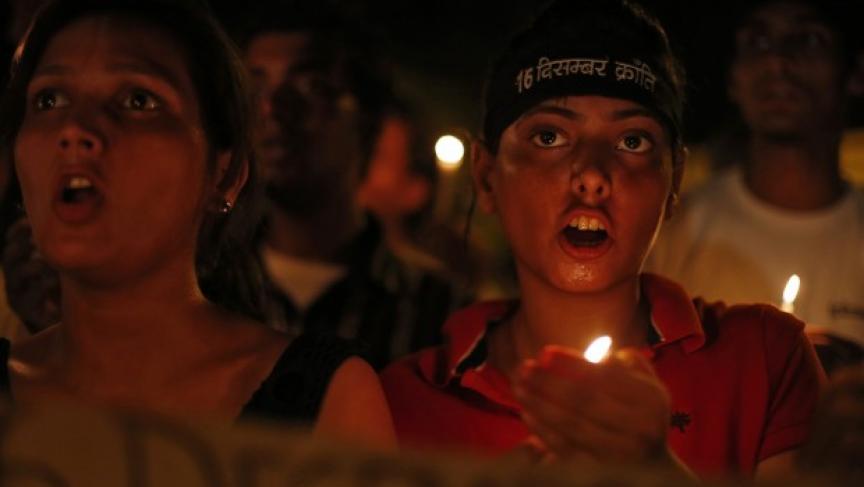 Demonstrators shout slogans as they hold candles during a candle light vigil after four men convicted of raping and murdering a 23-year-old woman in Delhi were sentenced to death in New Delhi September 13, 2013. Four men were sentenced to death on Friday for raping and murdering a woman in New Delhi last December, satisfying a public clamour for them to be hanged for a crime that forced India to confront its culture of violence against women. The demonstrators were demanding capital punishment for rapists during the vigil, demonstrators said.

It was a crime that shocked millions — in India and around the world.

And today, four men were sentenced to death for that crime — the brutal rape and murder of a young woman in New Delhi back in December.

The case not only sparked a global outrage.

It also forced many — particularly in India — to do some soul-searching about the widespread problem of violence against women.

She’s also founder of the “One Million Against Abuse Campaign” in India.

And she has mixed feelings about today’s sentencing.

Marco Werman: I’m Marco Werman and this is “The World”, a co-production of the BBC World Service, PRI, and WGBH Boston. It was a crime that shocked millions – in India and around the world. And today, four men were sentenced to death for that crime – the brutal rape and murder of a young woman on a bus in New Delhi back in December. The case not only sparked a global outrage; it also forced many, especially Indians, to do some soul-searching about the widespread problem of violence against women. Pranaadhika Sinha Devburman is a rape survivor in Calcutta. Sheâ€™s also founder of the “One Million Against Abuse Campaign” in India and she has mixed feelings about todayâ€™s sentencing.

Pranaadhika Sinha Devburman: I appreciate the fact that these men were caught and found guilty and I also appreciate that in the Indian context, the trial took a shorter period of time. But what I do not appreciate is the sentencing, the death sentence. I do not feel that that is correct.

Werman: And why not? Explain that.

Devburman: I feel that our country as a whole has a problem with dealing with rape in a appropriate and solution-oriented fashion. We have a lot of issues which lead to or rather facilitate rape and make life easy for the rapist and not for the survivor. And I feel that this country and its politicians are using this case and using the death penalty more to garner votes than to actually deal with the issue. Once they get the death penalty it’s not like they’re going to die tomorrow. This case is going to be transferred to the higher courts and that process by itself will take up to ten years.

Werman: Right. I mean I gather that on average judges hand out a hundred and thirty death sentences every year in India, but India has only executed three people in the past seventeen years. So are you concerned about an appeal process that might drag on for years?

Devburman: Absolutely, because the people defending the convicted rapists are now saying that they will appeal to the higher courts and the higher courts are known for showing clemency towards people who have carried out these heinous crimes. So there’s really no point to this sentence.

Werman: I mean I know you were a victim of rape, Pranaadhika.

Werman: How do you get to the bottom of the issue? I mean how can a public campaign really bring awareness to this issue in a way that a death sentence can’t.

Devburman: I think that we really need to really make the fact that people in this country, women especially, have rights. I think that fact needs to be brought about into public consciousness in a very big way and I think that would really be better than a death penalty, and also teaching women how to defend themselves in the first place is something which I feel is also necessary.

Werman: I mean some of those things like self-defense classes, you teach that kind of thing yourself to female university students so they can defend themselves. You taught a class today in fact.

Devburman: Yeah, we were approached by the authorities at the Presidency University in Kolkata, which is one of the premier educational institutes, and they have very kindly allowed us to connect with their students and speak with them about sexual violence and speak about empowerment and also teach them very basic self-defense skills which they can use to defend themselves.

Werman: What have your students been saying about today’s verdict and generally about violence toward women in India?

Werman: I mean on top of not really dealing with the issue of rape as you say, do you think a death sentence also undermines the moral force of activists like yourself?

Devburman: This is actually more than undermining the activists. This has a lot to do with the big failure on the part of the country as a whole. I mean if a country cannot tackle rape and if a country cannot talk openly and in a progressive fashion about the advancement of women’s’ rights, about empowerment, and about just generally tackling issues pertaining to sexual violence in a mature fashion, they’re going to just kill off rapists, that doesn’t say very much about India as a developing nation, does it?

Werman: I mean the Indian government was so outraged after the death of this young woman. Have they just kind of forgotten what happened? I mean what’s going on with their actions in terms of changing the situation around for women in India?

Devburman: Well, I think the Indian government was prompted in many ways by the outrage of the nation because the nation was shocked by what happened. The government in many ways I think was forced into acting. It was for into, for once, I think, answering to the citizens and letting the citizens know that it was taking a stand on this issue. Otherwise the government has never really taken as much of a stand on the issue of sexual violence as it has in this case.

Werman: Pranaadhika, very good to speak with you. Thanks for joining us.

Devburman: Thank you so much.

Werman: Pranaadhika Sinha Devburman speaking with us from Calcutta. She is herself a survivor of rape. She’s also the founder of the “One Million Against Abuse Campaign”.