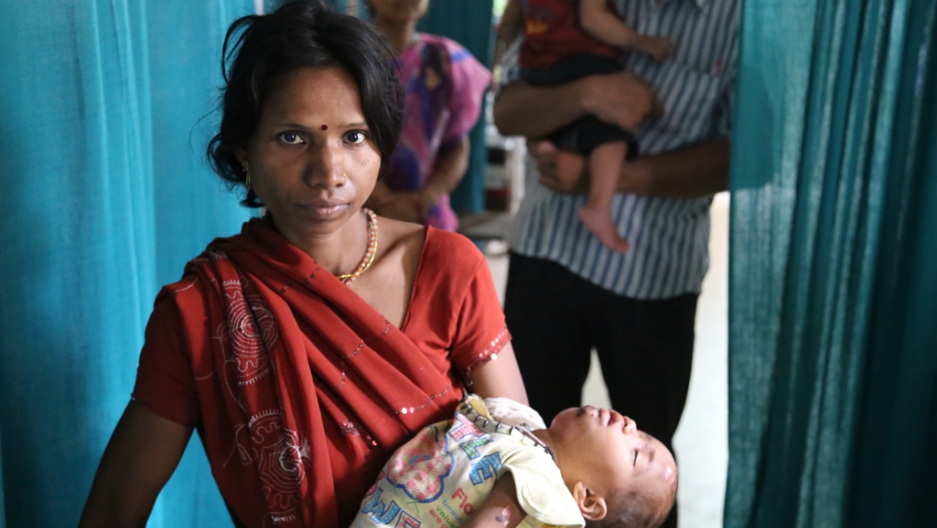 A mother with her 3-year-old daughter who suffers from chronic diarrhea and tuberculosis, at the District Hospital, Panna, Madhya Pradesh in Central India.
Credit: Harman Boparai
Share

The number of children who die before their fifth birthday declined by nearly 50 percent between 1990 and 2012, from more than 12 million to 6.6 million, according to a new UNICEF report.

Despite the good news, the world is not on track to reach the United Nations' Millennium Development Goal (MDG) to cut the 1990 child mortality rates by two-thirds by 2015. Unless the world more than quadruples the annual rate of reduction in child death, it won’t meet the MDG until 2028.

“These targets are ambitious,” said Geeta Rao Gupta, UNICEF deputy executive director, in a press conference Thursday. But, “dramatic progress is possible — even in the most resource constrained settings."

Most of the 6.6 million children under 5 who died in 2012 died of preventable causes. Pneumonia killed 17 percent, diarrhea killed 9 percent, and malaria killed 7 percent, according to the report. Nearly half died in the first month of life, some from diarrhea and pneumonia, to which newborns are especially sensitive, and many from birth complications like asphyxia or infections.

While all the top killers have taken fewer and fewer children over the past two decades, the most marked progress has been against diarrhea, which killed 50 percent fewer children in 2012 than it did in 1990. The battle against pneumonia and malaria has been slower, dropping by a third between 1990 and 2012.

“One of the reasons we haven’t made as much progress as we’d hoped was that, until recently, there wasn’t enough attention on newborn mortality,” said Eric Swedberg, senior director of child health and nutrition at Save the Children.

He attributes the uneven success to logistics. He used diarrhea as an example. The key to saving a child from dying of diarrhea is preventing dehydration, which can be accomplished by administering an oral solution or giving a child a zinc supplement, he said. Though distribution of ORS and zinc still need to be ramped up in many parts of the world, the treatment is cost effective and straightforward.

By contrast, saving a baby who is not breathing after birth requires a trained health professional to be ready to act, Swedberg said.

Critics of the millennium development goals weren’t surprised that the goal is a long shot.

“We were destined to fall short from the beginning,” said Elizabeth Gibbons, a visiting scholar at the FXB Center for Health and Human Rights at the Harvard School of Public Health. “A two-thirds reduction across the board was an unrealistic goal.”

Gibbons holds that the MDG is a well-intentioned, but poorly designed policy that, in some ways, may have hampered progress in child health — particularly in Africa and Asia, where children are most likely to die. She’s hardly the only one to raise such a critique. Earlier this summer, for example, one of the UN’s own statisticians independently released a paper that essentially branded the MDG ineffective, claiming the improvements in child mortality rates we’ve observed since 1990 would have happened regardless of the campaign.

A recent report published by the Harvard School of Public Health found that the MDGs, including the goal for reducing child mortality, encourage narrow approaches that rely heavily on technological solutions, while neglecting the need for broader social change or the strengthening of national institutions. For example, according to the report, pre-MDG policies took a holistic approach to low birth weight babies and malnourished children that took into account a mother’s education and social voice. Under the MDGs, on the other hand, a solution might be to pass out nutritional supplements.

Furthermore, the report found, although birth complications, pneumonia, diarrhea and malaria have long been the most formidable foes in the battle for child survival, the way the MDGs were drafted may have pulled attention away from them.

Gibbons, who co-authored the Harvard study, said the MDGs championed interventions that were easy to count rather than setting up a game plan to tackle the most aggressive child killers. For example, although measles only accounted for 4 percent of child deaths in 1990, it was included as one of just three child mortality sub goals.

Over the course of the MDGs, UNICEF reported that measles, which accounted for just 1 percent of child deaths in 2012, has seen the biggest decline of any infectious disease — by far. Measles deaths have declined by 80 percent since 1990.

In the decade since the MDGs were minted, the global health community has course corrected, Gibbons said. Through the Countdown to 2015 initiative, launched in 2005, for example, the UN now monitors progress on a number of high-impact indicators.

“We’re figuring things out,” she said. “But did we lose time because there was a decrease in attention to the most high-impact diseases during the early part of the decade? I think it’s a valid question that deserves some attention as we’re making post-2015 plans.”

More from GlobalPost: Step by Step: The Path to Ending Child Mortality