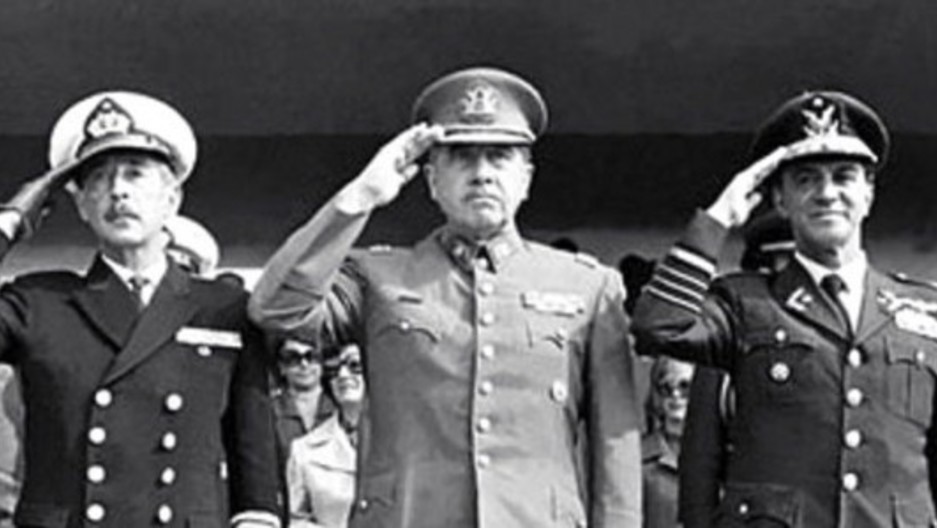 Former Chilean Dictator Augusto Pinochet is flanked by two other members of his junta in the 1970s. (Photo courtesy of the Biblioteca del Congreso Nacional, Santiago, Chile via Wikimedia Commons.)

Chileans on Wednesday marked the 40th anniversary of their 9/11, the Sept. 11, 1973, military coup that overthrew Chile’s democratically-elected president.

That coup ushered in a dictatorship led by General Augusto Pinochet, who would rule the South American nation until 1990.

Back in 1973, the coup cast a pall over the entire country, as the Chilean military detained anybody suspected of opposing the dictatorship. Thousands were disappeared, tortured or killed. Yet in the middle of all that, life went on in some bizarre ways.

A few weeks after the coup, Chile’s national soccer team faced a play-off game against the Soviet Union in Santiago. The winner would go to the 1974 World Cup, in Germany. The loser would stay home.

The match was to be held in Chile’s National Stadium in Santiago, but there was a problem: in the weeks since the coup, the Chilean military had transformed the stadium into a detention camp. Some 7,000 political prisoners were being held there.

The Soviets got wind of this, and refused to play in a stadium they said was “stained with blood.” The accusation was, of course, denied by Pinochet’s military junta. So, soccer’s governing body, FIFA, stepped in to mediate. It sent representatives to Santiago to inspect the national stadium.

Jorge Montealegre was a stadium prisoners. He was 19 at the time. The day FIFA officials toured the stadium, he says he and the other detainees were kept quiet — at gunpoint.

“They kept us down below, hidden in the locker rooms and in the tunnels,” Montealegre said. “We were kept inside, because there were journalists following the FIFA officials ... It was like we were in two different worlds.”

Somehow the FIFA representatives didn’t manage to see a single one of the detainees.

FIFA gave the Chilean stadium a clean bill of health and decreed that the match would go ahead — with or without the Soviet team. A few days before the game, Montealegre and the rest of the prisoners were transferred to the north of Chile, to a salt mining town in the Atacama desert.

“The eyes of the world were on Chile,” he said. “This symbol of a stadium turned into a concentration camp was like the worst propaganda for the dictatorship. That awful image went around the world, and the stadium became a metaphor for Chile’s dictatorship.”

On Nov. 21, 1973, ten weeks after the coup, in an almost empty stadium, the Chilean players came out to the field. They had no opponent. As threatened, the Soviet team didn’t show up. The Chileans kicked off, dribbled down the field, and shot into an open net.

High above the stadium, the scoreboard read: Chile 1, Soviet Union 0.

Carlos Caszely played for Chile that day. He was one of the stars of the team, a national sporting hero.

“That team did the most ridiculous thing in history. It was a worldwide embarrassment,” Caszely said.

Chile had qualified for the World Cup. Months later, in June 1974, Pinochet summoned the team for a send-off before they traveled to Germany.

“When we were all standing there the doors open and there comes a guy with a cape, dark glasses, [and] a hat,” Caszely said. “A cold shiver went down my back from seeing this Hitler-like looking thing, with five guys behind him. When he started coming closer I put my hand behind me and didn’t give it to him.”

That refusal to shake Pinochet’s hand was one of the first public acts of protest against the dictator.

At the World Cup, things went badly for the team — two draws and a loss. It left Caszely’s gesture as perhaps the most memorable episode in Chile’s World Cup campaign.

More than a decade later, in 1985, a farewell match was organized to celebrate Caszely’s retirement as a professional soccer player. It was also held in the National Stadium. More than 80,000 people came, cheering on the player — and unleashing their fury against Pinochet, who by then had been in power for more than a decade.

Onetime stadium prisoner Montealegre had been released by then. Others were never released. Some were killed; some were never accounted for. Montealegre remembers going to the match.

“People knew they were going to a sports event that was also political,” Montealegre said. “Caszely was very symbolic in that way.”

It was more than symbolic. Caszely’s own mother had been detained and tortured by the regime.

“Everybody knew what happened to his family, they knew that he’d refused to shake Pinochet’s hands,” Montealegre said. “That was an act of bravery that many people identified with — people who wished they had done something like that, but didn’t dare to.”

Not one television channel dared to broadcast Caszely’s retirement match, in part because they knew that the game might turn into a protest.

In fact, it was one of the first mass gatherings of regime opponents — and it marked a turning point for a nation that for decade had been cowed by the bullet and the torture chamber. Three years after that match, in 1988, Chileans voted against a new term for Pinochet.

A year after that, they voted again — in a democratic presidential election. Since then, the national soccer team, and its stadium, make news only for sporting reasons.

Dennis Maxwell is a journalist and a documentary filmmaker. His report is co-production with Radio Ambulante. Listen to Radio Ambulante’s longer, Spanish-language version of this story: