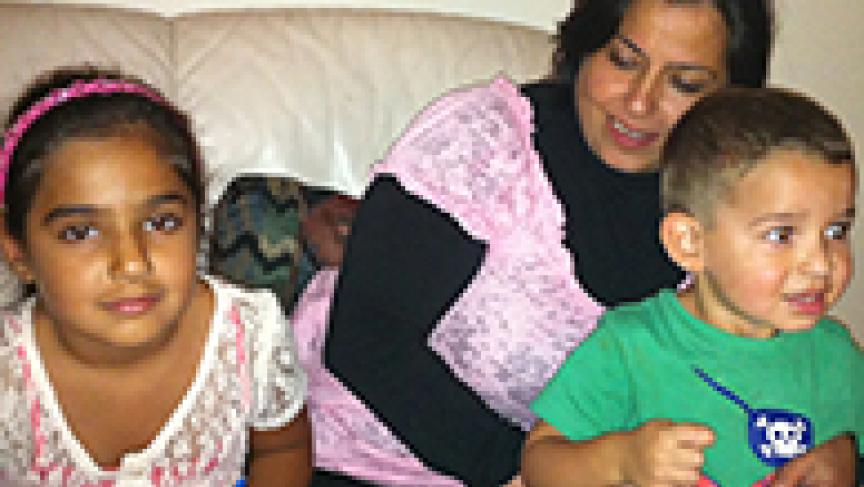 Maladh Mohammed Ali, whose son, Mohammed, was killed in Iraq while working as a military interpreter in 2008, moved to San Diego with her family six months ago. (Photo: Jill Replogle)

Share
As the crisis in Syria continues, we are looking back to past US interventions and to people directly affected by them. Where are they living now, how are they rebuilding their lives and what do they think about the war in Syria? In this story, Reporter Jill Replogle, of the public radio collaboration Fronteras Desk, follows up with a family from Iraq who moved to San Diego as refugees six months ago. We reported about their first days in America here. Now, Replogle finds that some members of the family are struggling to adjust to their new life. I hug Maladh Mohammed Ali outside of her apartment near San Diego. Maladh is the mother of three, but one of her son's, Mohammed, was killed, along with six US soldiers, in an explosion in Iraq in 2008. Mohammed was a US military interpreter. A former US Army captain, Blake Hall, worked hard to get them resettled in the US as refugees. In February, Maladh, her husband and remaining two children arrived in San Diego as refugees. Today, Maladh wears a headscarf and stylish sunglasses. She looks well, but as we walk out to her apartment building's parking lot, it's clear that things are rough. "I hate everything here, really," she says. Maladh's apartment has rats and roaches, she says. And her husband can't work. He has severe diabetes and high blood pressure, which worsened with his son's death. And Maladh says there have been delays in the insurance payments she and her husband are owed for their son's death. "There's no future," she says. We get into her niece Sama's car with Sama at the wheel. Maladh doesn't drive, a problem in sprawling Southern California, especially after Maladh got her first job–ever–cleaning rooms at a resort. But using public transportation to get to work took hours. Maladh adds, "I'm not young. I'm 50. So it's hard, to me maybe." After four frustrating days of missed buses and emotional breakdowns, Maladh gave up. So now, we're going to pick up her last work check. Most refugees are all too familiar with rocky starts like this. "I think when refugees first arrive there's a sense of euphoria. They're safe, their families are safe," says Bob Montgomery, who heads the International Rescue Committee in San Diego. It helps refugees from all over the world resettle here. "After the initial euphoria fades away, there's a period of time where, I don't want to say it's depression, it's not clinical depression, but clearly it's people being confronted with the realities of how difficult life here in the United States can be," says Montgomery. When we head back to Maladh's apartment building, Arabic pop music floats up the stairwell. Her extended family is squeezed into the two-bedroom apartment Maladh shares with her apartment. Also living there: their daughter, Maladh's sister, Maladh's niece, Sama, and her two young children. Maladh's 22-year-old son has since left to live with a cousin in Texas and work with the military there. Maladh's 12-year-old daughter, Sukaina, seem to be adjusting better then her parents. She says she likes her new school. And she's getting good grades. Maladh and I sit on her couch and she talks about things she misses in Iraq, like drinking coffee with her neighbors. Her sister brings out tiny cups of strong, sweet coffee spiked with cardamom. Against one wall, a TV broadcasts news in Arabic. An Iraqi parliamentarian is being interviewed. Maladh and her sister complain that Iraqi leaders are corrupt. Later on, the mood in the apartment lifts, thanks to the young children who've come home from school. I ask Maladh's niece, Sama, about arriving to the US from Iraq three and a half years ago. "Was it really hard for you at first?" I ask. "Yes," Sama says. "But it's more hard for her because she lost her son." She's referring to Maladh and her son Mohammed, killed in Iraq. "She didn't want to come here," Sama says. I then ask Sama about Syria. Does she think the US should intervene there? She says no. The US tried that in Iraq, she says, and the country is still deeply troubled. Sama says that Syrians should find a way to stop the bloodshed on their own. Reflecting on how Iraq's war has affected the family, Sama thinks her aunt, Maladh, will be okay with time. She'll learn to drive and start taking English classes. Even though Maladh seems miserable now, she is thankful that her family is safe and her two remaining children have a future in the US. "I miss Iraq and I'm sad because I see the situation is bad," she says. "I see blood everywhere. No food, no jobs. So, and I say, 'I'm good, my children is good.' I say, 'thanks God.'" With the help of her family, Maladh says that tomorrow she'll make another go at this new life she never wanted.