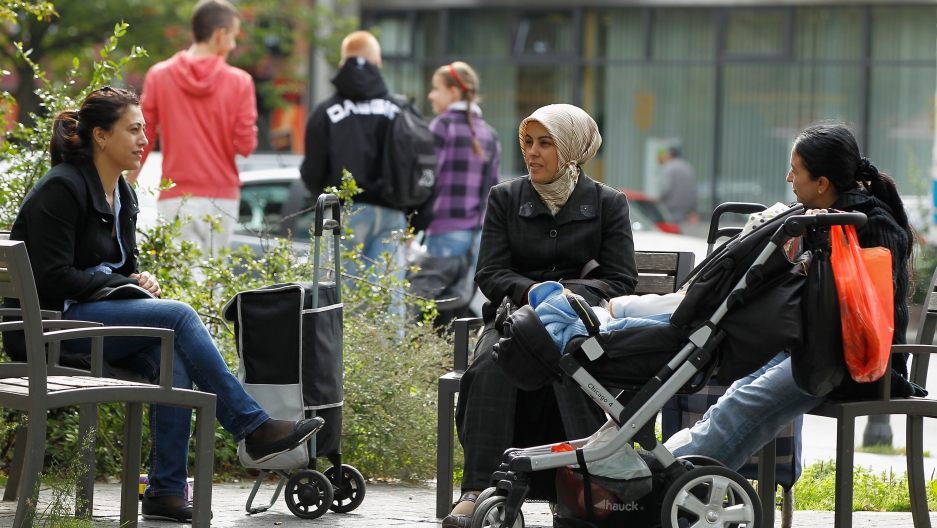 Editor's note: As Germans prepare for parliamentary elections later this month, senior correspondent Paul Ames made a 900-mile roadtrip across all 16 German states to take the measure of Europe’s most influential country. This is the fourth in his five-part series.

BERLIN, Germany — If your idea of a typical German includes blond hair, blue eyes and a diet of sausage and beer, think again.

Decades of immigration have turned Germany into an ethnically diverse society.

Thirteen percent of the population was born outside the country — about the same level as the United States, higher than Britain or France.

The German soccer team has provided a barometer of the change: 20 years ago, the nationalmannschaft had an exclusively Teutonic lineup with stars named Kahn, Kuntz and Klinsmann. The current roster has players with roots in Ghana, Tunisia, Turkey, Poland, Nigeria, Spain and Britain.

"This is already a new Germany, it has been for a while, but it took some years for the change to become visible," says Khue Pham, a journalist with weekly newspaper Die Zeit.

"Twenty percent of people who live in Germany have an immigrant background," she says. "One-third of children born now, those under the age of five, come from immigrant families — second or third generation."

Berlin's Kreuzberg neighborhood has become a symbol of the diversity.

The working-class district bordering the wall that once divided the city between east and west became a hub of the city's Turkish community in the 1960s. Today, it's also home to migrants from Africa, Asia and the Middle East, along with German hipsters attracted by low rents and multicultural buzz.

Some three million people of Turkish descent live in Germany, many first invited as so-called guest-workers to provide manpower for the country’s post-war economic miracle. Although the name implied they would eventually return home, most put down roots and made Germany their home.

In Kreuzberg housing precincts that once backed up against the Berlin Wall, older Turks in flat caps or bright headscarves chat through the summer evening while cracking sunflower seeds and watching their German-speaking grandchildren kick soccer balls. While their parents or grandparents came as industrial labor, a new generation of upwardly mobile Germans of immigrant descent is pushing its way into the middle class.

Well-dressed young Turks chill in Kreuzberg's chic Cafe Zera — which serves both apfelstrudel and watermelon-scented hooka pipes — and are as likely to be hanging out in the district's Mexican or Thai restaurants as ordering lamb skewers at the Adana grill house.

Immigrants and their descendents are increasingly visible in the arts, media and business as well as political life.

Vietnamese-born Philipp Roesler serves as economics minister and vice-chancellor. Cem Oezdemir, the son of Turkish guest-workers, heads the Green Party, which is expected to come third in September's parliamentary elections. Chemist Karamba Diaby, originally from Senegal, is hoping to become the first black politician elected to the Bundestag.

"We have to recognize the progress that has taken place in Germany over the past 15 years," Diaby said.

"There is a greater understanding now that people of foreign background represent a great potential for our society," he said in a telephone interview from the eastern city of Halle, where he’s campaigning ahead of the Sept. 22 elections.

Standing for the center-left opposition Social Democratic Party, Diaby says a revision of migration laws when the party was in power back in 2000 was key to changing attitudes by removing obstacles for immigrants to become German citizens.

"We have not yet reached the levels of integration of countries like Britain, France, Canada or the United States, but there are sufficient signs of progress that make me optimistic," he says.

Modern migration into Germany has gone through several phases. The Turks who came to toil for Germany industry in post-war boom years were joined by workers from Greece, Yugoslavia and other parts of southern Europe.

As the prosperity ground to a halt in the 1970s, the authorities stopped economic migration, but Germany opened up to refugees from conflict and oppression, bringing new communities from Iran, Afghanistan, Africa and the Middle East.

The collapse of communism saw more than two million Soviet citizens with ethnic German backgrounds allowed back to their ancestral homeland in the 1990s, while the expansion of the European Union in 2004 opened Germany's labor market to Eastern Europeans.

Last year, a million new migrants moved to Germany, the biggest rise in 20 years. Most came from Poland, Romania and Hungary, although there was a significant increase from recession-hit countries in southern Europe.

With German unemployment close to two-decade lows at 5.3 percent, businesses have found it easy to recruit skilled professionals from elsewhere in Europe where economies are struggling.

"I love my Portugal, but to be frank for professional reasons, I don't see myself going back there," says Ricardo Vieira Carreira, a mechanical engineer who moved to Munich last year. "My life was relatively comfortable there, but nothing like what I have here in terms of standard of living. I would have to get a very, very good offer to tempt me back."

Until 2000, German nationality laws were based on bloodlines, making it almost impossible for most immigrants to become citizens.

Russian-speakers from Central Asia who had never been west of Kazakhstan but could claim remote German ancestry would be given citizenship, but the offspring of Turks born in Germany, brought up on Goethe, Black Forest cake and a love of Bayern Munich, would be denied.

The change in the law has helped bring about a change in mentality, says Pham, whose parents came from Vietnam and who last year co-wrote a book titled "The New Germans" together with Die Zeit colleagues with Turkish and Polish backgrounds.

"That law gave a legal basis to the mentality that in order to be German you had to have parent or a grandparent who was German which was strong for a very long time and still exits, although it has been changing over the last few years," she says.

Unlike most of its neighbors, Germany hasn’t seen the emergence of far right, anti-immigration parties with broad electoral support.

Nevertheless, there is a significant undercurrent of opposition to the development of a multicultural society.

In 2010, a book critical of immigration titled "Germany Is Doing Away With Itself" by Social Democrat politician Thilo Sarrazin became a runaway best seller.

Ultra-rightist protests against a new refugee center in Berlin turned violent last month. Germans from immigrant backgrounds frequently complain of petty racism and point out that minorities face discrimination in education and the job market.

"There is a greater acceptance of diversity, but this does not mean that disadvantages at work or in the educational system have disappeared," says Karen Scheenwalder, research group leader at the Max Planck Institute for the Study of Religious and Ethnic Diversity.

"There is a structure that is disadvantageous for the socially under-privileged in general and immigrants suffer from that, plus there is no anti-discrimination intervention in Germany," she said in an interview from the university town of Goettingen. "In terms of political representation, only about 3 to 4 percent come from immigrant backgrounds, which is well below their share of the population."

More sinister are the activities of neo-Nazi groups that have launched violent attacks on immigrants. A trial is currently under way of suspected members of a far-right death squad accused of involvement in 10 murders, mostly of Turkish immigrants. German security forces have been widely criticized for failing to take the threat from such groups seriously.

More from GlobalPost: Small is beautiful: How Germany's economy has thrived amid recession

Asli Bayram has firsthand experience of the danger posed by racist extremists in Germany.

Her crowning as Miss Germany in 2005 — the first winner with Turkish roots — was welcomed as a sign of growing acceptance for diversity in the country. Twelve-years earlier, her family was victim to an attack on their home by a racist gunman that left her injured and her father dead.

"Germany has a big racism problem that is very much downplayed and not recognized by the government," says Bayram from her current home in London.

A successful actress who has won international praise for her on-stage portrayal of Anne Frank, Bayram also works as an anti-racism ambassador in her native Hesse region. She says greater investment is needed at national level to tackle the problem, particularly through education.

"Reforms have been half-hearted. There is not enough funding being put into anti-racism initiatives and given Germany's horrific history, much more should be done."