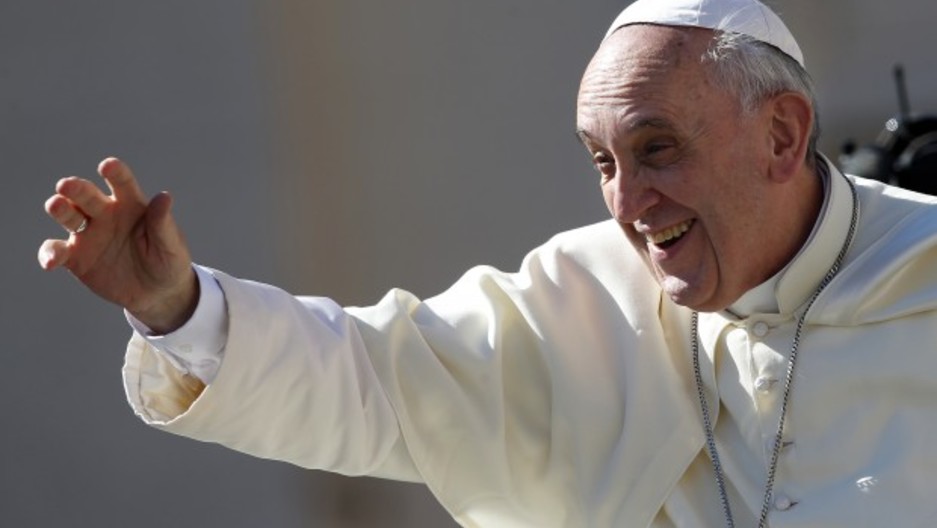 Share
Marco Werman: I'm Marco Werman, this is The World. Car envy, you see a sweet ride and you can't help that pang of jealousy, a vintage Ferrari Dino, a convertible Mercedes, that's what makes my jaw drop. Well, jaws have been dropping in Italy at the site of one particular economy car and that's because it belongs to Pope Francis, and actually, since when does the pope drive his own car? Patty Agnew is the new Rome correspondent for the Irish Times and he's with us now. So, Patty, what is the pope driving? Patty Agnew: Well, the pope's driving 20-year-old Renault 4 with about 300,000 kilometers on the clock. And he's driving it because it was offered to him by a 69-year-old priest in the northern Italian city of Barona. He wrote a letter to the pope and was telling the pope about the work he's doing, because he works in a parish on the outskirts of Barona, where he works with homeless, with kids with drug problems. He was describing that in the letter that he wrote to the pope and he also then said that he'd like to make the pope a present of this old car for symbolic reasons, essentially. And he was very surprised when just a couple of nights ago he got a phone call from the pope, Francis said to him, "Are you serious? Do you really want to give me the car?" The priest said yes and Pope Francis said well have you got another car? He said yes, yes, I've got another car. So he said okay, well see me next Saturday in the Vatican. The priest basically put the car onto a lorry. He got a number of his parishioners to put it into a bus and the lorry and the bus both made their way down to the Vatican. And last Saturday, just a couple of hours before the pope lead his prayer vigil for peace in Syria, Father Zocca presented the 20-year-old car to the pope. Werman: Wow, so Renault 4, that's a real jalopy. Americans might remember the Renault 5, which was marketed in this country as Le Car for a few years. Renault 4 isn't even that good. It's a real, I mean it's a real junker, isn't it? Agnew: It's what Italians like to call utilitarian. It's very much a basic car, but they were very good little cars. I mean in my native Ireland people would use them to you know, bail some hay in the back and drive through the fields to give the cattle something to eat. So they're very tough old cars. The bad thing about this one is that when Father Zocca got to the Vatican last Saturday, he and just a number of the parishioners were allowed in through the gates of the Vatican and went to the Domus Santa Marta, which is the glorified Vatican B&B where Pope Francis lives. And the pope came down to look at the car and Father Zocca said, "Well, look you know, Holy Father, these are some of my parishioners." There were more parishioners outside, but the Swiss guards wouldn't let them all in. And he said, "Oh, wouldn't they? Well, we'll see about that." And with that, Francis got into the Renault alongside Father Zocca and they drove off to the front gates of the Vatican to greet the other parishioners. And then he took them all inside the Vatican afterwards. Werman: I love it, a real man of the people. So what about the security issue? I mean the whole Popemobile with its bulletproof dome was to heighten security, are there Swiss guards stuffed into this Renault like circus clowns? Agnew: I'm not sure, Marco, how much he's actually gonna use this Renault. It's more a symbolic gesture. What he does do an awful lot, Francis, he walks around the Vatican a lot and he drives an old Ford Focus around as well. So what he will not do is use as you pointed, the Popemobile, nor the very formal bulletproof Mercedes and BMW-type cars that are available in the Vatican guard. He doesn't want that type of conspicuous wealth. In as much as he doesn't want that, he is a nightmare. He's a headache for the Vatican security because you know, he simply ignores some of their sacrosanct basic security measures. There's another aspect to this as well, which you know, our listeners, some of them I'm sure are aware of, but a couple of weeks ago he said it pains me when I see a priest arriving somewhere in a flashy new car. And the gesture that the Father Zocca of Barona made is that, i.e., at the end of the day, one of the most interesting aspects of Francis' pontificate so far is a lot of his teaching, a lot of his comments are directed not just at the faithful, but also at his own clergy. And in this case, in the case of cars and flashy cars, what he's saying is, you know, whatever happened to your vows of chastity, poverty and obedience…particularly poverty. Werman: Patty Agnew, the Rome correspondent for The Irish Times. Thanks so much. Agnew: Thank you.