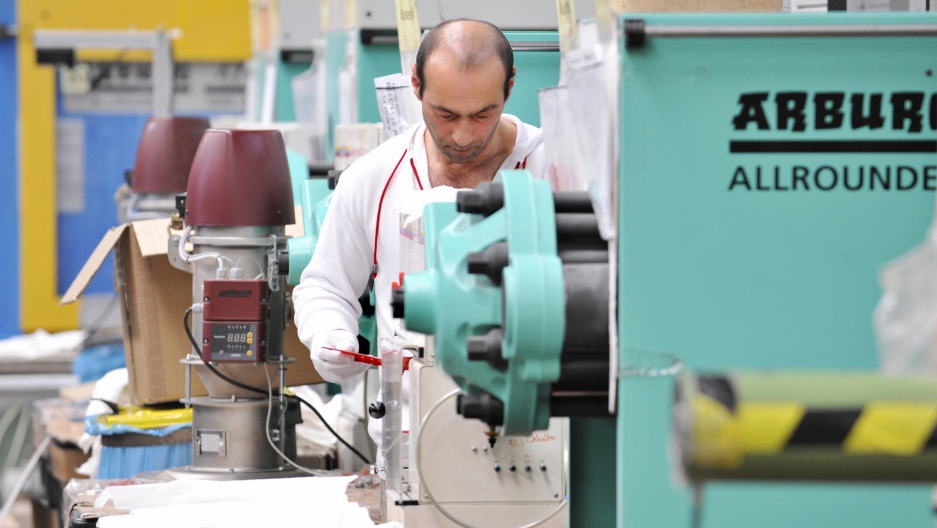 Small and medium sized companies, many of them family owned, are the driving force behind the "Made in Germany" reputation for quality.
Credit: John MacDougall
Share

Editor's note: As Germans prepare for parliamentary elections later this month, senior correspondent Paul Ames made a 900-mile roadtrip across all 16 German states to take the measure of Europe’s most influential country. This is the third in his five-part series.

WERTHEIM AM MAIN, Germany — Tourists disembarking from luxurious Amsterdam-to-Budapest river cruises may not believe Wertheim is a global industrial powerhouse.

There are no billowing smokestacks, no smog or rumble of heavy machinery.

Instead, the pretty little town on the river Main wows visitors with its romantic hilltop castle and cobbled streets lined with colorful cafes offering kaffee und kuchen, and the crisp local white wine.

Head a couple of miles down river, however, and you discover Germany's greatest concentration of world-beating businesses.

Clustered in a bend of the Main and facing a forested Bavarian hillside on the far bank are row upon row of neat, clean factory buildings, mostly run by the kind of small-to-medium-sized companies that form the linchpin of Germany's economy.

Their success explains why Germany has thrived while most of Europe languishes in recession.

"We are looking for the best possible quality," says Werner Scheuermann, product manager at Koening & Meyer, the leading global manufacturer of music stands.

"We only use the best material and everybody in the music market knows that," Scheurermann says as he strides across the factory floor. "This is the reason for our success, we are the quality leader in the music industry — like Rolls Royce in the car industry."

Although Germany is best known for giants such as BMW, Siemens and BASF, its smaller firms — many of them often family run — are the economy's driving force.

Collectively known as the mittelstand, they make up 98 percent of Germany's exporting companies and employ two-thirds of the workforce.

"These innovative and internationally competitive firms that we call the mittelstand are extremely important," says Ferdinand Fichtner, head of forecasting and economic policy at the German Institute for Economic Research in Berlin. "It's not only for export industries but for the German economy in general. It is the backbone of the economy."

Wertheim, a city of just 24,000 people, boasts 11 companies designated as global leaders in their sectors.

What they produce isn’t sexy on the whole. Wertheim-based companies are world-beaters in laboratory glassware, screen printers and industrial communication systems. Dominance of global niches by those so-called "hidden champions" is vital to Germany's economic ascendency.

Behind the factory doors, the reasons for their success are clear: a winning combination of high technology and old-fashioned craftsmanship.

In the alfi vacuum container factory, state-of-the-art robotics are used to mold metal discs into the distinctive shape of pots that used to keep coffee hot on hotel breakfast tables around the world. Nearby, skilled polishers burnish their chromium, silver or golden shine by hand.

One of German industry’s strengths is an apprenticeship system that combines on-the-job training with classroom education. It gives youngsters hands-on experience and skills. Apprentices spend time working in all departments of their companies, developing an overview of their needs and building team spirit.

"They stay with the company for three years, and they go to school one to two days a week. They learn how to prepare products, they learn how to deal with administration. They really see the big picture. This is something really important in Germany."

Down the road at K&M, school kids as young as 15 spend up to three weeks on production lines during their summer vacations to get a taste of work.

"Almost everyone here started out on the apprenticeship program, including the directors" says President Martin Koenig, whose father founded the company in 1949. "That's one of the reasons for our success. We don't have a lot of turnover of staff. People are trained here and keep their skills and experience in the company, they stay for 30 or 40 years."

Mittelstand companies take pride in their non-confrontational labor relations. Workers are consulted on major decisions and ideas exchanged between factory floors and boardrooms. "We have successes together and we have losses together, Schmitt says. "That’s something that we try to grow ourselves, being a family."

When Germany was hit by the global economic downturn in 2008, companies negotiated deals with unions to reduce working time and wages instead of laying off staff.

That helped keep German unemployment down at record lows while the jobless rate soared elsewhere in Europe. At the same time, the companies were able to bounce back with their skilled workforce in place when order books started picking up.

"What happened in Germany during the recession was some kind of burden sharing," Fichtner says. "Firms accepted declining profits during the recession at the expense of keeping workers on the job. Workers, on the other hand, accepted that their wages decreased or increased only at a very weak rate and they accepted shorter hours. This kind of burden sharing relates to the notion that the workers and employers are together responsible for good of the firm."

Although Germans have a reputation for hard work, they actually put in some of the shortest hours in Europe: just 1,397 hours a year, according to the Organization for Economic Cooperation and Development. That's the second lowest in the euro zone after the Dutch.

Americans toil for 1,796 hours, and the much-maligned Greeks put in 2,034 hours a year — the longest in Europe.

Germans argue that while their shorter working day and six-week paid holidays are sacrosanct, their work ethic guarantees higher productivity while they’re on the job — with few chats around watercoolers or Facebook time when the boss looks away.

"We look for continuity with our suppliers and our customers," Koenig says. "We take care of the details, the little things that you don't always see. You have to listen to your customers, when we listen to the people who use them, that helps us develop our products."

Innovation is another key to success. The company puts 30 to 40 new products on the market every year. Tablet holders for musicians who want to read their music on screen are a recent addition to the catalog.

"German companies compete on value, not price: they manufacture complex products with a lot of build-in value; focusing on the premium segment of mass markets," says Prof. Bernd Venohr, an expert on the mittelstand at the Berlin School of Economics and Law. "Innovation is the lifeblood and the key to success, they are masters of incremental innovation and integrating new technologies."

The focus on high-quality, technologically advanced products has enabled Germany to profit form the rise of new economic powers. Chinese entrepreneurs look for the Made In Germany label both for their high-end automobile and the precision tools in their factories.

BMW's sales to China rose by 39 percent in July. The carmaker expects the Chinese market to replace the United States as its biggest export destination this year. Figures like that have help Germany keep its place as the world's third's largest exporter behind the US and China.

It hasn't always been so rosy, however. In the 1990s, Germany was labeled the "sick man of Europe" as rising labor costs eroded competitiveness and production fled to cheaper post-communist countries to the east.

In 2003, the center-left government of then Chancellor Gerhard Schroeder pushed through a controversial reform package to open up labor markets, reduce payroll taxes and cut welfare benefits. The result divided Germany.

More from GlobalPost: Germany faces up to new responsibilities as Europe's pre-eminent power

Unions blame the reforms for undermining consensual labor relations, forcing around 20 percent of the workforce into low-wage jobs with little job security and a weakened welfare safety net. As a result, they complain, Germans spend less and the economy has become dangerously dependent on exports.

"This led to a growth of the low-wage sector and to precarious work. That was the main outcome of those reforms," says Florian Moritz, head of European and international economic policy at the German Confederation of Trade Unions. "In economic terms it also had a bad outcome, if you look at domestic demand in Germany, especially private consumption, it's stagnating."

Opposition to the reforms may have cost Schroeder his job in the 2005, election but his successor Angela Merkel — whose center-right party is set to be re-elected later this month — has recognized their value in helping Germany cope with the globalized economic competition that has come with rise of China and other new powers.