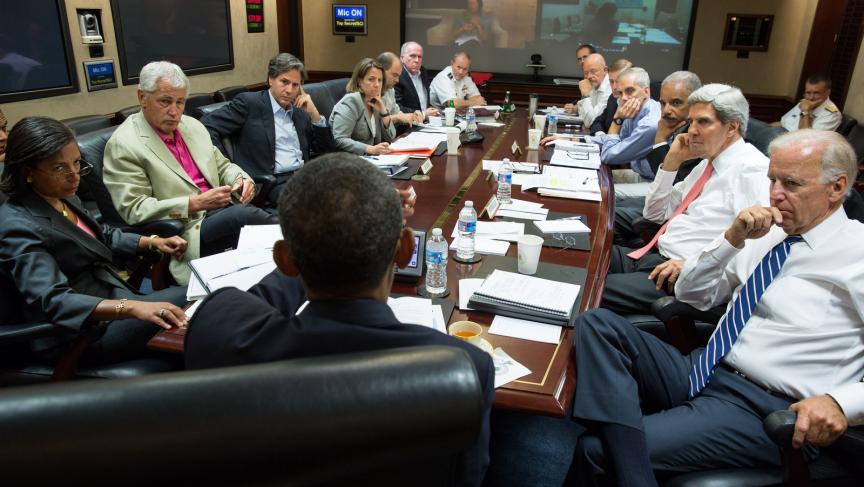 President Barack Obama meets in the Situation Room with his national security advisors to discuss strategy in Syria. (Photo courtesy of the White House.)

Invoking images of American soldiers dying from gas attacks in the trenches during World War I and of Hitler's mass killings during the Holocaust, President Barack Obama Tuesday night laid out, sometimes in graphic detail, why he felt airstrikes were warranted in Syria.

At the same time, though, Obama said he had asked Congressional leaders to delay their vote to authorize the use of force until additional negotiations, research and diplomacy could be done on the Russian proposal to put Syrian chemical weapons under international control.

In a speech that at times seems directed at Americans who had paid only the slightest attention to the ongoing controversy in Syria, Obama argued that from a moral and security perspective, the United States had no choice to act.

"What happened to those people — to those children — is not only a violation of international law, it’s also a danger to our security," he said. "Our ideals and our principles are at stake in Syria."

In response, he proposed a sharply limited set of military strikes that would not include boots on the ground; that wouldn't be open-ended like Iraq or Afghanistan nor include a "prolonged" air campaign, as was employed in Kosovo or Libya.

He said these "targeted strikes" would make "Assad, or any other dictator, think twice before using chemical weapons."

At the same time, he responded to critics who said a series of cruise missile strikes would amount to a pinprick.

"The United States military does not do pinprick strikes," he said. "Sometimes resolutions and statements of condemnation are simply not enough."

But almost in the same breath, Obama said he was willing to wait before launching those strikes — giving diplomacy one last shot to resolve this crisis. Obama said the United Nations Security Council and Secretary of State John Kerry with his Russian counterpart would all move this week to see if agreement could be reached to place Syria's chemical weapons under international control and to ultimately destroy them.

"Any agreement must verify the Assad regime keeps its commitments," Obama added.

He also called on Americans to watch videos of the victims of the attack in Syria — mothers and fathers, children and babies dead and dying after being gasses in the suburbs of Damascus.

"Terrible things happen across the globe, and it is beyond our means to right every wrong, but when with modest effort and risk we can stop children from being gassed to death and thereby make our own children safer over the long run, I believe we should act," he said.