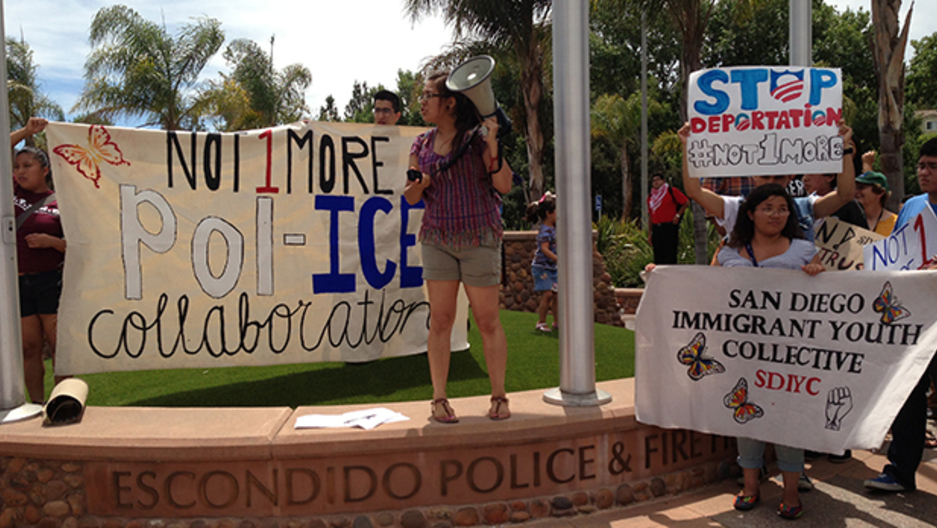 Immigrant advocates rally in support of the California Trust Act, which if passed will restrict local jails from cooperating with federal immigration agents for the purpose of immigration enforcement. (Photo: Adrian Florido)

It's often called S-Comm. Its official name is Secure Communities. It's the federal program that makes it easier for immigration agents to gain access to local jails and detain people suspected to be in the US illegally. Its supporters say it lets local and federal cooperate on immigration enforcement. But criticism of S-Comm is growing, with cities and entire states, including California, now resisting the program. From the public radio collaboration Fronteras, Adrian Florido filed this story.

We are in San Diego County's central jail. It's where suspects are booked and, for years, have had their fingerprints checked against FBI databases. Straightforward stuff, until 2008. That's when the Immigration and Customs Enforcement Agency, or ICE, entered with a program called Secure Communities.

As Captain Daniel Peña explains, now the FBI and ICE are informed of arrests. "They'll be able to review those records to see if there's anybody they have interest in terms of immigration violations or things of that matter," Peña says.

If ICE believes someone in custody might be deportable, it sends a request to have the person, including people who might otherwise be released, held in jail until an immigration agent arrives. That period shouldn't exceed 48 hours.

It is a program that has helped ICE deport nearly 2 million immigrants since President Obama took office.

But here in California, there's resistance to Secure Communities because of stories like Felipe Porcayo's. Last year, his 23-year-old son was arrested after a fight broke out at a park in San Diego. He says police determined his son wasn't involved. But ICE asked him to be held in custody. Next, he was deported.

Jon Rodney, with the California Immigrant Policy Center, says this is a common story when it comes to Secure Communities.

"The original intent of this program was to focus on people who have serious convictions," says Rodney. "But when we look at these 100,000 Californians who have been deported, we see that about seven out of 10 did not have what immigration authorities consider to be the most serious offenses."

Now, politicians and activists are calling on California's legislature to pass a bill that would address this. Viviana Gonzalez, an undocumented immigrant, addressed a recent rally for the bill in the city of Escondido, near San Diego.

"We're pushing for the governor to sign the TRUST Act this year, because it's important. Communities like Escondido have seen the brunt of what it means to not have something that protects immigrant families," says Gonzalez.

The TRUST Act would require local jails to ignore ICE's request to detain immigrants for deportation, unless they have prior violent convictions.

The bill is called the TRUST Act because its sponsors say it will restore the trust that's been lost between police and many immigrants who fear that contact with the cops—even calling 911 or cooperating with investigations—could trigger a deportation.

San Diego's police chief and other cops back the Trust Act. But California's Sheriff's Association opposes it.

Still, cities across the US, including Chicago, New York, and recently, New Orleans, are also refusing to honor ICE's requests.

ICE officials didn't agree to be interviewed for this story, but they emailed a statement saying the agency's priority is to deport people who threaten public safety.

But José Ucelo says his story suggests otherwise. He's a Southern California day laborer who says when he tried to collect his pay from the man who hired him, the man accused Ucelo of trying to rob his house. Ucelo was arrested but not charged in the end.

Ucelo says that despite the dismissed charges and no prior crimes, he remained in ICE custody. It took a lawyer, thousands of dollars, and months to get his deportation case closed.

The TRUST Act aims to avoid ordeals like this. California Governor Jerry Brown vetoed the bill last year, saying it needed to ensure violent criminals wouldn't be released from custody. It's likely that California's state senate will vote on a new version of the bill Monday.