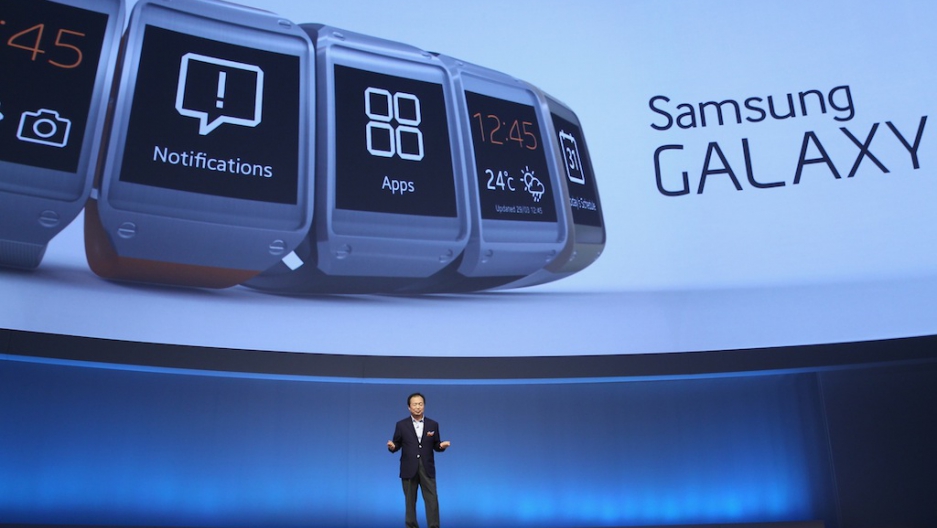 SEOUL, South Korea — Samsung, the world’s largest smartphone maker, is marching toward the next battlefield in its war against Apple.

On Wednesday in Berlin, the Korean mega-corporation unveiled the long-anticipated Galaxy Gear, a wearable smartwatch set for release on Sept. 25.

Launched a week before Apple reveals its hyped iWatch, Samsung is trying to dispel its image as a “fast follower,” a common label that it imitates other technologies in tried-and-tested markets, rather than innovating on its own.

Whether it has effectively achieved that goal is a matter of debate.

Most reviewers have doubted that smartwatches will revolutionize electronics the way the smartphone has. True to that prediction, in its public debut the Galaxy Gear has been labeled the Swiss army knife of watches. Critics say the bulky, hard wrist screen is cumbersome, and find its 10-hour battery life to be limiting.

Regardless, Samsung can count on an energized domestic market to bolster the watch’s commercial success. When it comes to seizing new technologies, Americans are sloths compared to consumers here in South Korea, the Samsung empire’s fatherland, where the pressure to adopt the next tech fad is intense.

In the “Republic of Samsung,” trendy youngsters are gearing up for a smartwatch bonanza. It’s not a question of whether the gadgets are useful; as long as they look cool and have fun features they will become objects of desire, according to Korean 20-somethings interviewed by GlobalPost.

“Of course I’m getting the watch, and everybody will probably do it,” says Yoon Hyuk-joo, 20, a university student in Seoul. When asked how he’ll buy it, he said, “I’ll just use my credit card … You know, if you don’t get new stuff, people think you’re sort of backwards and maybe unsuccessful.”

For many in this newly-rich, hyper-wired democracy, consumerism is paramount regardless of the costs. In the race for prestige, Koreans have amassed the world’s heaviest load of household debt — buying top-notch diplomas, English lessons, overpriced apartments, cars, smartphones, and plastic surgery, writes the sociologist Ku Nan-hee in "Korea: A Country of Fad and Frenzy."

Call it the real “Gangnam Style.”

“Keeping up with the Joneses here is really remarkable,” said Mike Breen, author of "The Koreans: Who They Are, What They Want, Where Their Future Lies." “The faddishness comes from the fact that the brands in Korea are the 'chaebol' [conglomerates like Samsung and LG] themselves, and not the products. Combine that with the way Koreans have been educated to compare themselves with others” and you have a spending super-storm.

Especially when it comes to the nation’s most powerful chaebol.

Known to Americans mostly for its Galaxy smartphones and TVs, Samsung wields enormous influence on its home turf. “With Samsung, there is an assumption that it has the best people and will lead, whether it’s in making batteries, offering life insurance, or anything else,” Breen said.

The Samsung Group, which is not a legal entity, refers to more than 80 affiliates that make everything “from chips to ships,” according to a common tagline. The group produces about 20 percent of all Korean exports.

Samsung Electronics is the empire’s crown jewel. The highly efficient, family-run company is awash in cash, giving it the resources to bet on a dizzying range of technologies while absorbing the failures.

“Samsung's competitive advantage is in its seamless, extreme execution that is possible due to its top down command and control management structure,” said Jasper Kim, a Samsung watcher and law professor at Ewha Women’s University in Seoul.

Each year, the corporation puts out a welter of Android-based smartphones and tablets in all sorts of sizes, loaded with software bells and whistles that critics deride as “feature spam.” The company also supplies the parts to competitors like Apple and Sony, making it nearly indispensible to the industry.

Compare that to Apple’s tighter focus — a strategy that involves putting out about one smartphone a year, and a relatively small array of other products. Samsung, despite its breadth, has yet to be first with a game-changing gadget like the iPhone or Sony Walkman. Instead, it prefers to watch how competitors fare before launching an onslaught. This holds true even with the Galaxy Gear, unveiled before the iWatch but after the Sony Smartwatch.

But being a “fast follower” isn’t always to the Samsung’s detriment.

Consumers in China and South Korea, two attractive markets, often prefer the feature-heavy build of Samsung products, which are also cheaper than iPhones.

Analysts say that in China, Samsung has established a clear lead over Apple, and is thriving despite growing competition from Chinese giants Huawei and Lenovo.

For now, with an increasingly saturated US smartphone market, the watch may be the next logical step at home — especially given that it can count on throngs of ravenous consumers here. Regardless of whether it succeeds, it’s a low-risk proposition. “Samsung and Apple are expanding their margins a bit” beyond smartphones, says William Stofega, a mobile analyst at IDC, a Massachusetts-based market intelligence group.

He said that the devices aren’t world-shattering, because they involve putting smartphone technologies on a smaller device. And even if the watch is a dud, Samsung, for one, can fall back on its size as it ponders the industry’s future and waits for its competition to make the next move.