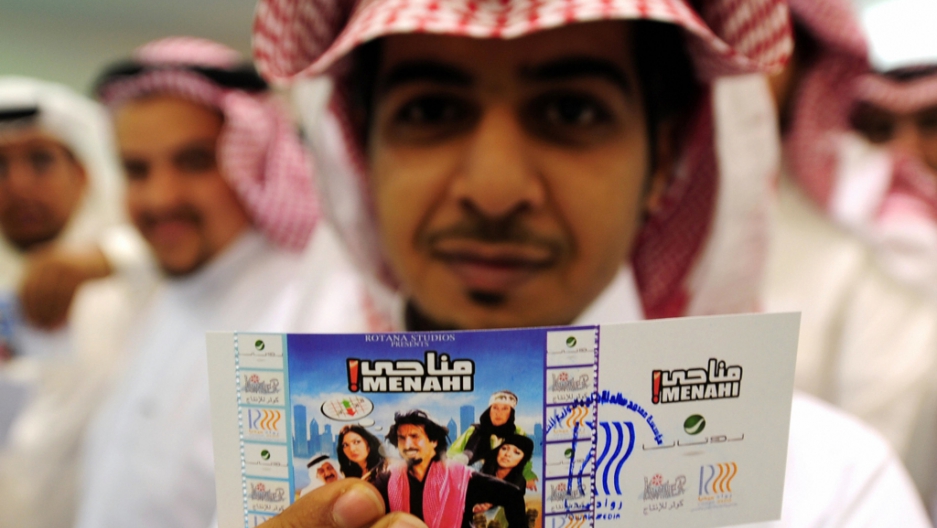 A Saudi man holds up his entrance ticket to see the Saudi comedy film 'Manahi' at a theatre in Jeddah in 2008. The conservative kingdom normally places a blanket ban on public film screenings and movie theaters.
Credit: Omar Salem/AFP
Share

When speaking about his controversial work as a comedian in ultra-conservative Saudi Arabia, 28-year-old Fahad Albutairi sites Oscar Wilde.

“There is an Oscar Wilde quote that says: ‘If you want to tell people the truth make them laugh, otherwise they’ll kill you,’” Albutairi, who hosts his own comedy show online, said in a phone interview. “Seriously, this is what we’ve been facing.”

In this wealthy but isolated country, ruled by a strict, ultra-conservative monarchy, the authorities often jail activists for dissent.

But a new online-based comedy community, to which Albutairi belongs, is pushing the boundaries of satire and social commentary here. Today, the conservative kingdom is in the midst of a comedic revolution of sorts — thanks in part to the introduction of YouTube to Saudi in the late 2000s.

“We keep thinking: ‘Oh my God, are we going to cross a red line at some point?’” said Albutairi, whose satirical show La Yekhtar (Zip It), gets 1 million hits per day on YouTube.

Before YouTube, comedy in Saudi was mostly slapstick or cheesy, with just a few troupes dominating the scene because they were the ones with access to television stations.

The idea of standup comedy — performing live for an audience — was nonexistent.

But the population’s growing consumption of Saudi-produced comedy shows online has opened up the political and social discourse in a way that was unthinkable before the internet was made available for public access in 1999.

Saudi Arabia right now has the highest per-capita YouTube use of any country in the world, with more than 90 million hits every day, according to YouTube news manager Olivia Mia.

With just 28 million people, that amounts to an average of more than three YouTube views per citizen per day. It also boasts the region’s highest rate of online television viewing in general at 25 percent, according to global research firm Ipsos.

And the country’s “young generation didn’t really have a chance to make major changes in the comedy scene until the YouTube era,” he said.

One reason for the high level of internet use is the lack of major broadcasting companies in the Kingdom: most Saudis use satellite dishes to watch television, where just five companies dominate the market.

Hisham Fageeh, another comedian who works with Albutairi on La Yekhtar, says comedy is a platform younger Saudis can relate to when it comes to talking politics or social customs.

Saudi’s population is extremely young, with 60 percent of Saudis under the age of 30, according to the United Nations Department of Economic and Social Affairs. And traditional media outlets tend to shy away from discussing things like gender equality or government corruption.

“If you pay close attention to what these comedians say, you will see there is quite a bit of social and political commentary there,” said Ahmed Al Omran, a Saudi journalist who has reported extensively on the comedy scene.

“It seems that the government is actually OK with that,” Al Omran said. “They’re OK with people using comedy to speak this way because it’s not very direct. And what we have seen so far is that actually some government officials are even embracing these comedians and praising their efforts.”

In another episode — poking fun at fringe Florida pastor Terry Jones, infamous for burning a copy of the Quran — Albuitari calls on young Saudis to send him their textbooks so they can be burned.

While in America such comedy is commonplace, in Saudi Arabia, it’s groundbreaking.

But the royal family has even invited Albutairi to perform for them, despite the controversial content of some shows.

Omran says it’s difficult for the government to crack down. Attempts to censor particular episodes have had little impact as young Saudi netizens use proxy servers to get around the restrictions.

Albutairi says conservatives often take issue with their comedy, saying what they’re doing is immoral because by assuming the roles of characters or using sarcasm they’re “lying.”

But the online and public response has for the most part been overwhelmingly positive.

“I cannot tell you how welcoming the audiences are and the amount of praise I get, from little kids to older men and women,” Fageeh said. “It’s shocking to me.”

Watch an episode of La Yekhtar (with English subtitles) below: