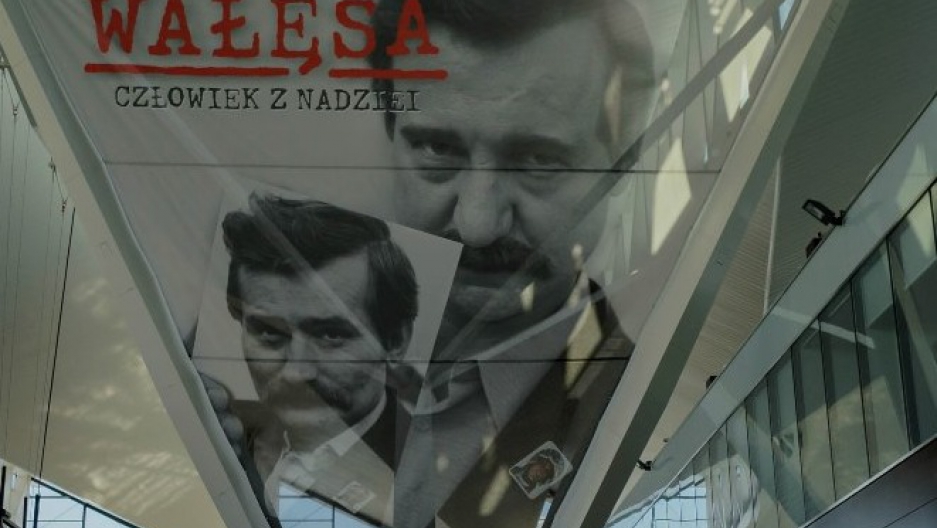 Some hope "Walesa: Man of Hope" will change how his role in history is perceived.
Credit: Natalia Ojewska
Share

WARSAW, Poland — When Lech Walesa launched a strike with a group of fellow workers over the firing of one of their colleagues in August 1980 at the Gdansk shipyard on the Baltic Sea, the electrician couldn’t have known he was embarking on a path that would result in the dismantling of communism and culminate with his presidency.

But it wouldn’t end there. Since stepping down, the 69-year-old former leader of the Solidarity union movement who once mobilized millions of Poles has become one of his country’s most controversial figures, criticized for his sharp-worded criticism of homosexuals and leftists.

Now another famous Pole, the film director Andrzej Wajda, is weighing in with his take on Walesa’s role in history in the final installment of a trilogy about disillusionment in communism he started in the 1970s. “Walesa: Man of Hope” premieres at the Venice Film Festival on Thursday.

The Oscar-winning filmmaker describes his friend as a “modern hero, who due to his obstinacy transformed our country into a democracy without any bloodshed.”

“My movie is going to portray him exactly as such a man,” Wajda said in an interview.

Even if the film successfully makes an impression in Venice, however, the real test will come when it’s shown in Poland later this year.

Back in 1980, Walesa called off his initial strike after the shipyard director agreed to its demands. However, the action had inspired workers at other factories to plan their own strikes. When Walesa changed course and announced a general strike to unite them, he established himself as the co-founder and leader of the largest trade-union movement in history.

Solidarity, which won backing from 800 various companies and mines across Poland by the end of the month, eventually earned the support of a quarter of Poles who came together to expand their demands that the communist authorities respect their rights, freedom and dignity.

Walesa soon led negotiations between the striking workers and the government that concluded in a groundbreaking agreement, marking a significant first step toward overthrowing communism without the throwing of a single rock.

Walesa maintained his opposition leadership over the next decade, despite being detained, persecuted and kept under surveillance, until the communist government agreed to enter round-table negotiations in 1989 that led to the first democratic elections since World War II.

Parliamentary Speaker Bogdan Borusewicz was an opposition leader who organized the first wave of protests in August 1980. He remembers Walesa as someone who “was a very good strike leader, who never committed any mistakes and neither did other strikers.”

Walesa’s crowning achievement was to be elected the country’s first post-communist president in 1990. But his reputation has since steadily deteriorated.

The onetime blue collar worker with no higher education was regularly criticized for heavy-handedness and a lack of diplomatic skills. He was also accused of having collaborated with the communist secret police, which he’s steadfastly denied.

In an interview at his office in Gdansk, the white-haired former president, who still sports his trademark mustache, explained that given his volatile personality, controversy was inevitable once he was elevated to the country’s highest office, a position he says he never wanted.

“I knew that I would be criticized and misunderstood,” he said. “But in the end I didn’t have a choice because no one else would have been able to utterly destroy communism in Poland.”

The former union leader, who openly acknowledges what he calls his “coarse and independent attitude,” became politically isolated after numerous clashes with his allies and onetime Solidarity colleagues.

Henryk Jarczyk, a correspondent for the German broadcaster ARD, has interviewed Walesa numerous times over the past two decades. He says each time he met the former leader, he found him to be more “big-headed, sometimes even arrogant.”

“When I interviewed him after he lost re-election for his second term as president, he tried to insinuate that no one in Poland was as well prepared as he to fight the communist regime,” he says. “Even more, he indicated that the revolution in the 80s would have accomplished nothing without him.”

More recently, Walesa prompted international criticism for suggesting Polish gay politicians should “sit behind a wall” in the country’s parliament.

A friend of such right-wing American politicians as Rick Santorum, he also made news in the United States last year by endorsing Mitt Romney during the then-presidential candidate’s visit to Poland. Solidarity criticized Walesa for it, saying Romney was an enemy of trade unions and labor rights.

Walesa defends his actions, saying his recent statement about gays was misunderstood.

“I have my own considerations and standards which are not always clear and appropriately interpreted,” he told GlobalPost, adding that he’s always understood and respected minorities.

Many Poles believe he’s discredited himself.

Robert Biedron, Poland’s first openly gay deputy, whose mother belonged to Solidarity and who says he long looked up to Walesa, believes the former leader has “lost his political path.”

“He was once a great leader who took on the communists and gained democracy for Poland,” he says. “Now, he often proposes theses that don’t reflect reality, are wrong and even disgrace his reputation. I think that’s how the majority of Polish society perceives him.”

Walesa’s opinions and personality have become “an explosive concoction,” Biedron adds. “He may be the most famous homophobe Nobel Peace Prize winner in the world.”

If anyone can challenge such beliefs, it’s Andrzej Wajda. His films, which typically depict major historical events, have helped shape the Polish perception of communism. Among them are the two preceding installments in his trilogy, the critically acclaimed modernist films “Man of Marble” and “Man of Iron.”

The two met during the strikes of August 1980. “I saw in him a real leader of workers who knows his goals and how to communicate them to his followers,” Wajda said at the time.

Downplaying speculation that he’s seeking to restore his reputation, Wajda says his opinion about contemporary Walesa is irrelevant.

“Lech played his role as a leader and accomplished his mission leading to free elections during the round-table negotiations,” he said. “It’s this period of time that’s depicted in my movie.”

If more hints were needed about his portrayal in the film, however, Walesa himself describes it as “phenomenal.”

“The movie is really good,” he said, “but it’s a fairytale.”

Some believe a positive portrayal that’s dismissed as too distant from Walesa’s current reputation risks further overshadowing his achievements.

However, Tomasz Lenz, a member of parliament from the governing center-right Civic Platform Party, says he believes the film will play an important role by helping Poles rediscover Walesa’s role in history.

“We will meet him again from a new perspective,” he says. “This movie may influence how people perceive Walesa in Poland and the world.”