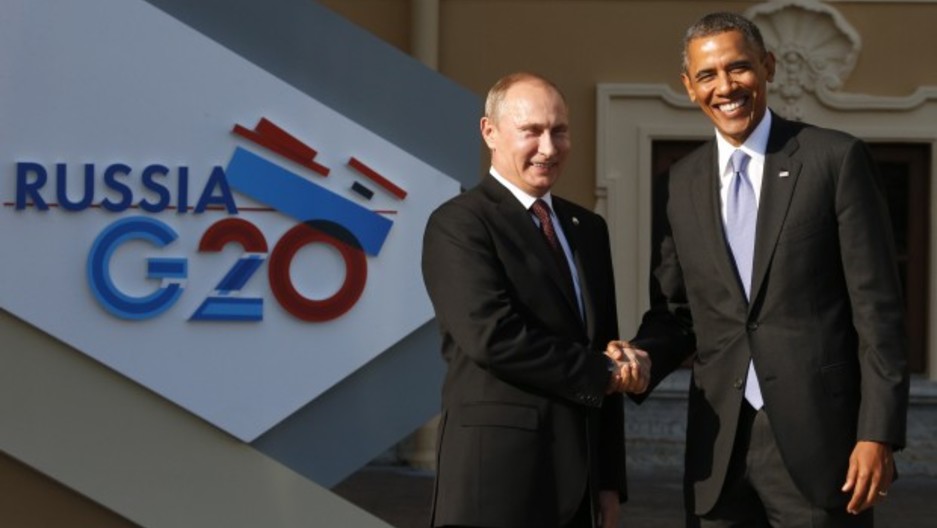 Share
President Obama arrived in St. Petersburg today to take part in the G-20 summit. He was greeted by the host of the event, Russian president Vladimir Putin. There were big smiles and a handshake. But beneath those smiles lurks a serious disagreement about Syria. Host Marco Werman speaks with The World's Matthew Bell about the US-Russian rift over Syria. So, why is Syria so important to Russia? Here's a helpful explanation written by The Guardian's Middle East editor, Ian Black. Russia has been Syria's most important international ally since Soviet/cold war days. Its interests there are strategic, commercial and broadly political. Tartus is Russia's sole remaining Russian naval base on the Mediterranean. Besides arms exports, Russian companies have major investments in Syria's infrastructure, energy and tourism sectors, worth $19.4bn in 2009. Russia strongly disliked the way the 2011 Libya crisis was handled when a UN security council resolution it supported on humanitarian grounds morphed into Nato-backed regime change. Vague phrases like "further measures" now set off alarm bells in Moscow. Western intervention is a red line. More broadly the Kremlin fears instability in the Middle East and Central Asia. Russian policymakers worry about the spread of Islamic militancy as well as a western/Arab project, via the fall of Assad in Syria, to isolate Iran. Russia has occasionally hinted that it is not wedded to Assad himself, but its policies have continued to protect him. Some western policymakers still believe that could yet change. For another look at just how far apart Obama and Putin stand on the issue of Syria's alleged use of chemical weapons, check out the comments today from US Ambassador to the United Nations, Samantha Power. "I was present in the meeting where the UK laid down the resolution, and everything in that meeting, in word and in body language, suggests that that resolution has no prospect of being adopted, by Russia in particular," she told reporters. "Our considered view, after months of efforts on chemical weapons and after 2-1/2 years of efforts on Geneva (peace talks), the humanitarian situation, is that there is no viable path forward in this Security Council," she said. The Russians are reported to be planning to evacuate its citizens from Syria and, in the meantime, beefing up their naval forces in the eastern Mediterranean. Finally, watch the White House deputy national security advisor, Ben Rhodes here tell the BBC that the Obama administration can win over international support for its proposed military intervention in Syria.