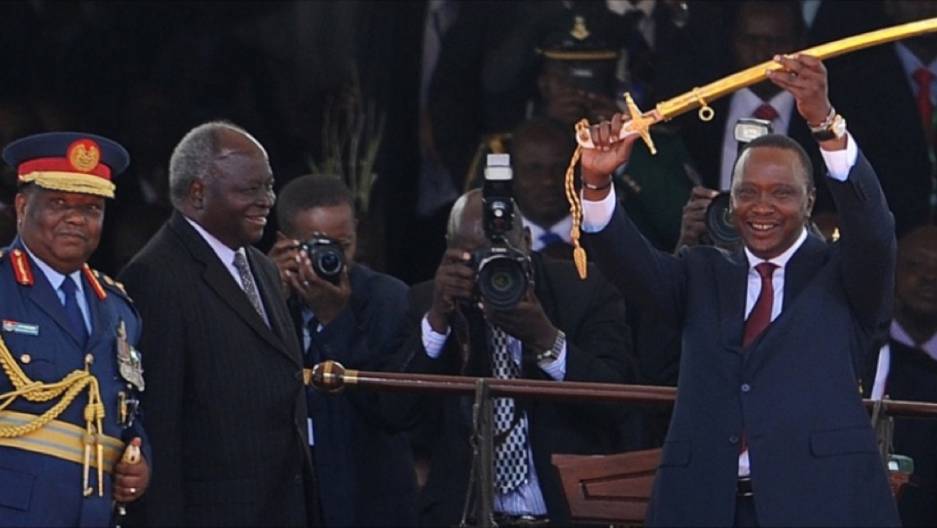 Kenya's 4th President Uhuru Kenyatta receives a symbolic sword of power from outgoing president Mwai Kibaki (2L) after he was sworn into office on April 9, 2013 in Nairobi. Uhuru Kenyatta was sworn in as Kenya's fourth president on Tuesday to thunderous cheers from tens of thousands of supporters, despite facing trial on charges of crimes against humanity.
Credit: TONY KARUMBA
Share

NAIROBI, Kenya — Kenya today became the first state to quit the International Criminal Court, in a move to show support for the country's political leaders, who are due to be tried for crimes against humanity, and that marks a blow against international justice.

In an emergency session Thursday, Kenya’s parliament voted to withdraw from the Rome Statute, the treaty that established the ICC.

The court’s prosecutors charged President Uhuru Kenyatta and Deputy President William Ruto with masterminding the ethnic-based violence that killed more than 1,100 people and forced some 600,000 to flee their homes following the 2007 presidential election.

Kenyatta and Ruto’s Jubilee Coalition dominates both the National Assembly and the Senate, where members slammed the court as a politically motivated and “neocolonial” institution.

Kenyatta is only the second sitting leader to be charged by the criminal court. Sudan’s Omar al-Bashir was the first. In May, the African Union branded the court "racist" for prosecuting mainly African leaders.

“This is the latest attempt to undermine international justice and discredit the process,” said Gladwell Otieno, executive director of the Africa Centre for Open Government (AfriCOG), a Nairobi-based civil society organization.

“Over the years, time and again, at the national and regional levels and at the [United Nations] Security Council, we’ve seen attempts to undermine the court and undercut support for it,” Otieno said.

Kenyatta and Ruto insist they will cooperate with the ICC. The court only got involved in Kenya after lawmakers repeatedly failed to set up a local tribunal, and after Kenya’s police and judiciary failed to even begin investigations of their own.

After the disputed 2007 election, angry supporters of opposition candidate Raila Odinga turned on those — usually identified by tribe — they believed had voted for incumbent President Mwai Kibaki. Kibaki supporters attacked members of Odinga's tribe in retaliation, and marauding gangs burned, hacked and raped their opponents in weeks of violence.

At the time, Kenyatta was Kibaki's right-hand man and Ruto Odinga's loyal ally.

They joined forces this year in a power-sharing deal that saw them win elections in March.

Maina Kiai, a prominent Kenyan human rights activist, executive director of the organization InformAction and a UN special rapporteur, said the influence of Kenyatta and Ruto over parliament is clear.

Around 100 lawmakers said they will travel to the ICC at The Hague for the opening of the trials, and have lined up at the Dutch Embassy in Nairobi to apply for visas.

“They are in total control of the politicians in their party who would not act without the support and acquiescence of these two guys,” Kiai said of the president and his deputy. “It would be naïve to think [the parliamentarians] are doing it on their own.”

But while the vote played well with Kenya’s ruling party and its supporters, it will not halt the trial and may only hurt Kenya’s international standing, rights advocates warn.

William Pace of the Coalition for the ICC, a global network of civil society organizations, says Kenya’s exit from the treaty will have no legal impact on current cases, including Kenya’s.

ICC Chief Prosecutor Fatou Bensouda, a lawyer from Gambia, said the Kenyan case would continue despite the vote.

“Kenya gains no legal advantage by withdrawing from the ICC,” Pace said. “The Rome Statute makes quite clear that obligations related to existing investigations continue even in the event of a withdrawal.”

But If Kenyatta and Ruto fail to appear, the court could issue arrest warrants or ban the leaders from traveling.

“It’s extremely damaging for Kenya’s reputation to be seen to be seriously supporting moves that may end up in us becoming a pariah state,” Otieno said.