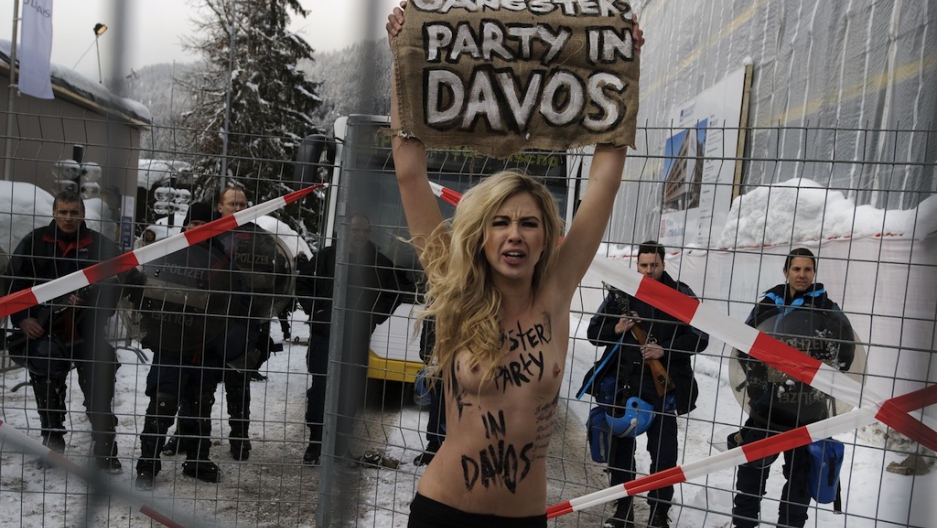 An activist from the Ukrainian feminist group 'FEMEN' shouts slogans during a topless protest against the World Economic Forum (WEF) annual meeting in the Swiss resort of Davos on January 28, 2012.
Credit: FABRICE COFFRINI
Share

According to a new documentary called "Ukraine is not a Brothel," feminist group Femen was founded and is controlled by a man who says women are "weak" and "bitches."

Australian filmmaker Kitty Green, 28, outed Victor Svyatski, previously known as a "consultant" to the group, as the founder and mastermind of Femen, famous for its breast-baring protests.

Her film, "Ukraine is not a Brothel," debuted at the Venice Film Festival this week.

Green describes Svyatski as charismatic, but questions his influence over the women in the group. She spent a year living with four members of Femen in a tiny Kiev apartment and filming their stunts.

"He can be really horrible but he is fiercely intelligent," she said of Svyatski in an exclusive interview with The Independent.

Initially Green did not know Svyatski, who claims he was badly beaten by the Ukraine secret service for being linked to the group, ran Femen, but she eventually realized he was the one in control.

He refused to be a part of the film at first, but Green would not back down.

"It was a big moral thing for me because I realized how this organization was run. He was quite horrible with the girls. He would scream at them and call them bitches."

In the documentary, Svyatski discusses the irony of being a "patriarch" running a feminist group and says, "these girls are weak" and "don't have the strength of character."

"They don't even have the desire to be strong. Instead, they show submissiveness, spinelessness, lack of punctuality, and many other factors which prevent them from becoming political activists," Svyatski says in the film. "These are qualities which it was essential to teach them."

When asked if his initial goal in starting Femen was "to get girls," he says: "Perhaps yes, somewhere in my deep subconscious."

He even admits to selecting the "prettiest girls" for the topless protests himself.

The Femen movement has spread its messages of "nudity is liberty," "better naked than in a burqa" and "our mission is protest, our weapons are bare breasts" across the world. One of its members, 18-year-old Tunisian activist Amina Sboui, scandalized her country when she posted topless photos of herself online with the words "my body is my own" written across her torso.

She had to go into hiding after receiving death threats, but later reemerged and was caught writing "Femen" on a cemetery wall near the city of Kairouan's main mosque.