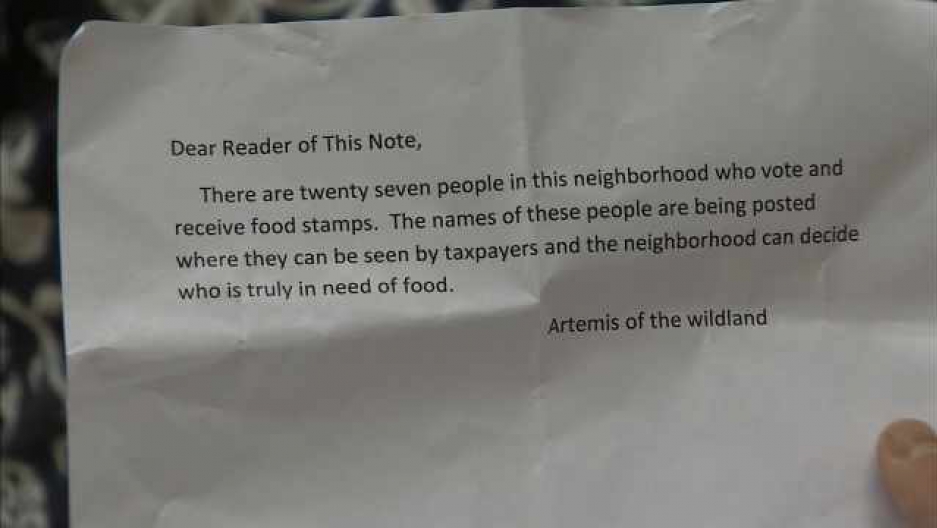 Mystery fliers being posted around Portland, Ore., threaten to expose the names of those receiving food stamps or disability benefits so the neighborhood "can decide who is truly in need of food."

Homeowners in a southeast Portland neighborhood received letters on their doors Monday signed only "Artemis of the wildland."

"There are twenty-seven people in this neighborhood who vote and receive food stamps," the letter read, according to KFVS12 News. "The names of these people are being posted where they can be seen by taxpayers and the neighborhood can decide who is truly in need of food."

This is the second wave of mystery letters to pop up around Portland. Another letter last month targeted people receiving disability benefits.

"There are sixteen people in this neighborhood who vote and receive cash disability payments," said fliers posted in August, KPTV reported at the time.

"The names of these people are being posted where they can be seen by taxpayers and the neighborhood can decide who is truly disabled."

The letter even accused those receiving disability payments of being a threat to democracy.

"Benjamin Franklin said 'when the people find they can vote themselves money, that will herald the end of the republic.’ Some of us in the neighborhood wish to save this democracy and to stand in the way of those who would destroy it," it added.

The Franklin quote is popular among conservatives but its authenticity is unclear.

It's been attributed to pretty much every Founding Father, plus Alexis de Toqueville and Alexander Fraser Tytler.

The fliers did not sit well with neighbors who called them "hateful", "horrible" and "disheartening," but police aren't left with many options.

"On the surface of it, I can’t find a crime there," Oregon Police Dept. Sgt. Pete Simpson told the Los Angeles Times on Tuesday.

"It's probably not a crime, because there wasn’t any overt threat and they were being left on porches and/or telephone poles — which, realistically, we don’t enforce telephone stuff because we’d have to arrest concert promoters."

"It appears to be somebody trying to stir up the neighborhood a little bit and get people upset," Simpson added.

The names of people receiving any kind of federal or state assistance, including food stamps or disability payments, are not public record.