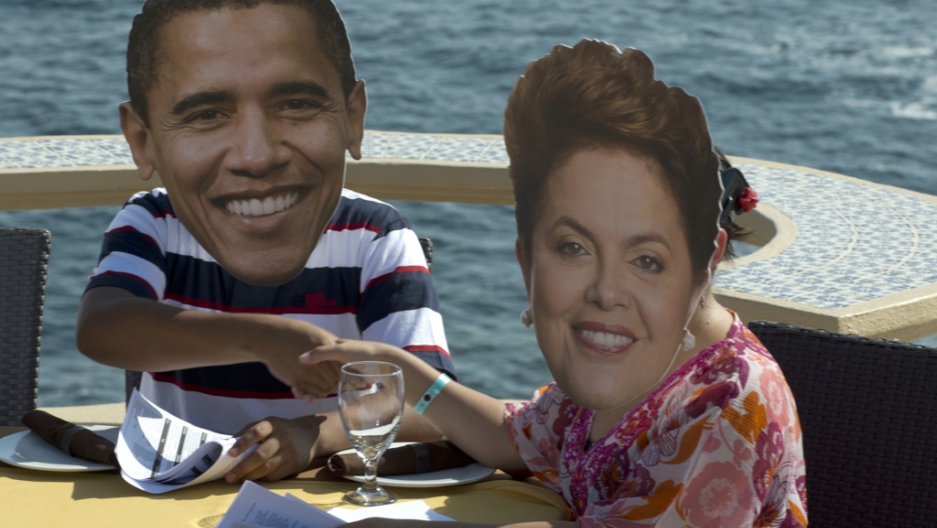 After new spying revelations, there could be more behind the smiles that President Barack Obama and his Brazilian counterpart Dilma Rousseff will surely wear at the G20 summit.
Credit: Yuri Cortez
Share

MEXICO CITY, Mexico — His tangles with Vladimir Putin over Syria and gay rights might already have guaranteed President Barack Obama a chilly stay this week at the G20 summit in the former Russian imperial capital of St. Petersburg.

Now, new allegations of US spying on the presidents of Mexico and Brazil could bring him a little Latin heat as well.

The charges, leveled Sunday by journalist Glenn Greenwald, citing National Security Agency documents purloined by fugitive US whistleblower Edward Snowden, mark the second time this summer that US agencies have been caught eavesdropping on the supposed allies.

Peña Nieto didn't comment publicly on the latest allegations of NSA intercepting his emails and other communications during his presidential campaign last year. But following July reports of NSA snooping on internet communications in Latin America, the Mexican president said it would be "totally unacceptable" for the US government to engage in spying here.

The US Embassy in Mexico declined to comment on “specifics,” saying Tuesday only that “the United States and Mexico enjoy close cooperation on many fronts.”

Brasilia has expressed “indignation” and demanded an explanation — in writing by the end of the week — from Washington of this week's revelations. Foreign Minister Luiz Alberto Figueiredo called in US Ambassador Thomas Shannon to relay President Dilma Rousseff’s anger at having her emails and phone calls apparently tapped.

"From our point of view, this is an inadmissible and unacceptable violation of Brazilian sovereignty,” Figueiredo told a news conference in the Brazilian capital, saying the alleged spying was “incompatible” with the supposedly friendly bilateral relationship.

Of course, any grumbling by the Mexican and Brazilian delegations in St. Petersburg might well be made behind closed doors during the two day summit, which begins Thursday and will focus on the still fragile world economy. But that doesn't mean the irritation will remain secret.

Snowden leaks in July revealed that both US and British spy agencies had eavesdropped on then Russian President Dmitry Medvedev and other leaders during the G20 summit in London four years ago.

Those revelations also detailed the NSA monitoring the calls and emails of millions of people in most Latin American countries, from Mexico to Argentina.

Greenwald, a Rio de Janeiro-based journalist who writes for The Guardian newspaper, has been the conduit for other Snowden leaks. His latest bombshell, which Greenwald revealed on Brazilian TV show “Fantastico,” comes at a potentially sensitive moment for US relations with both Latin America's largest countries and economies.

US law enforcement agencies targeting violent criminal gangs south of the border only recently have begun to patch up relations with Mexican counterparts.

Boeing, a US aircraft maker, is close to landing a $4 billion contract to sell 36 F-18 fighter jets to Brazil. Rousseff is slated to visit Washington in October.

Some observers worried both the defense contract and the visit could now fall through. Figueiredo told Reuters that whether Rousseff’s trip still goes ahead “will depend” on the US explanation.

Nevertheless, Brazil may also wish to avoid escalating the dispute with Washington. The Rousseff administration has adopted a pragmatic foreign policy of seeking good relations wherever possible, and avoiding conflict unless absolutely necessary.

Indeed, when Snowden applied from his hideout in a Moscow airport to Brazil for asylum, the government gave him short shrift, saying his application did not even merit a response. Brazil's rejection came even as its neighbors, such as Venezuela and Bolivia, appeared to go out of their way to welcome the whistleblower — and to lambast Washington for pursuing him.

More from GlobalPost: Brazil president is criticized for “timid” reaction to US spying

Despite its expressions of dismay, Peña Nieto's government also seems eager to underplay reaction to the allegations. The responses so far seem mild compared to that of former President Felipe Calderon in 2011 over revelations by WikiLeaks of US diplomats' criticism of the Mexican army and police in conducting the war against criminal gangs.

A furious and embarrassed Calderon demanded, and won, the removal of then US Ambassador Carlos Pascual.

Continued US spying in Mexico is "truly degrading," Luis Alberto Villarreal, leader of the opposition National Action Party's delegation in lower house of congress, told Reforma newspaper on Tuesday. "It's a lack of respect, it has been the historic conduct of the Americans and to us it's unfortunate that a president who generated hope for change, like Barack Obama, is turning out to be more of the same for the rest of the world."