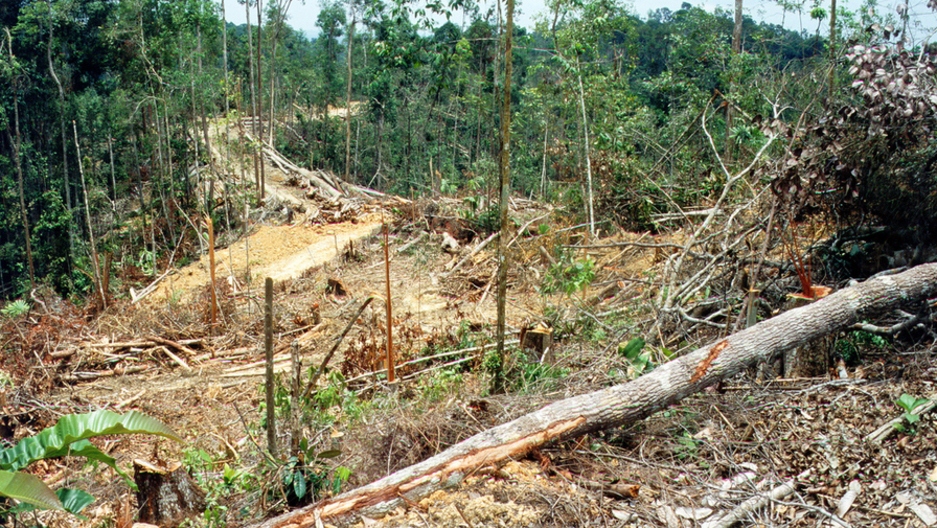 Deforestation in Indonesia continues despite a presidential moratorium on new land concessions for pulp and paper companies. (Photo courtesy of the Rainforest Action Network.)

The the United Nations' REDD project has spent four years trying to save and protect Indonesia's rainforest.

REDD, which stands for Reducing Emissions from Deforestation and forest Degradation, seeks to preserve and replant these vital forests to help absorb climate change-causing gases and stave off, or at least push off, global warming.

But REDD doesn't work overnight, and even back in 2009, when the program was launched, Indonesian politicians were worried that the slow payback would doom the project from the very start.

Amy Moas, an environmental activist for Greenpeace, says, in fact, progress has been incredibly slow.

"While there is a general consensus within the international community that this is a good idea to reduce emissions through deforestation, we have not yet practically figured out how to create a program that will see real carbon emissions and protection of forests," she said.

But it's not all the fault of Indonesia — or any country that is host to a REDD program she says. It's closely related, Moas contends, to the lack of a global climate agreement.

"Some of the key difficulties are happening at the international climate negotiations," she said. "Some of the obstacles include how to actually monitor and verify the real carbon emission reductions."

And then there's the issue of funding.

Combined, that's made the REDD project in Indonesia less than successful, Moas said.

"The Kampar Peninsula in particular is a critical landscape because of its high carbon rich soils. But REDD has not yet seen to be effective in protecting that area," she reported.

A paper company even proposed protecting the peninsula through REDD, but after all the obstacles not only  backed out but even began turning the forest into paper products.

And so far, despite strong national support for REDD in Indonesia, it's mostly been business-as-usual at the regional and local level.

"It's here where there is very little knowledge of what REDD will actually look like in practice. It’s also at this level where we are more concerned about corruption," she said.

A few years ago, the president of Indonesia imposed a moratorium on new forest clearing. It was extended again in 2013. And that's helped, because the federal government won't grant any new forest concessions to industries like pulp and paper companies, or to palm oil companies, Moas said.

While this national government action has helped, it hasn't made all the difference.

"A lot of these companies and industries still hold vast amounts of concessions of undeveloped land, so the rate of deforestation has not really decreased," she said.

Deforestation continues at an astonishing rate. Moas said one recent study found 80 percent of the large island of Borneo has been deforested.

"If you look at just Indonesia alone, the number is about 25 percent, so a little bit better," Moas said. "But the remaining forests are in very remote areas including the islands of Siluwese and Papua, so the islands of Sumatra and Borneo have been almost completely decimated."

All that says REDD still has a long road ahead of it to be considered even modestly successful.

"The local communities aren’t seeing the benefits just yet," Moas said. "REDD definitely has the potential to change the way that forests are managed, and present and opportunity for forests to remain standing. Unfortunately we are still a ways away from that."