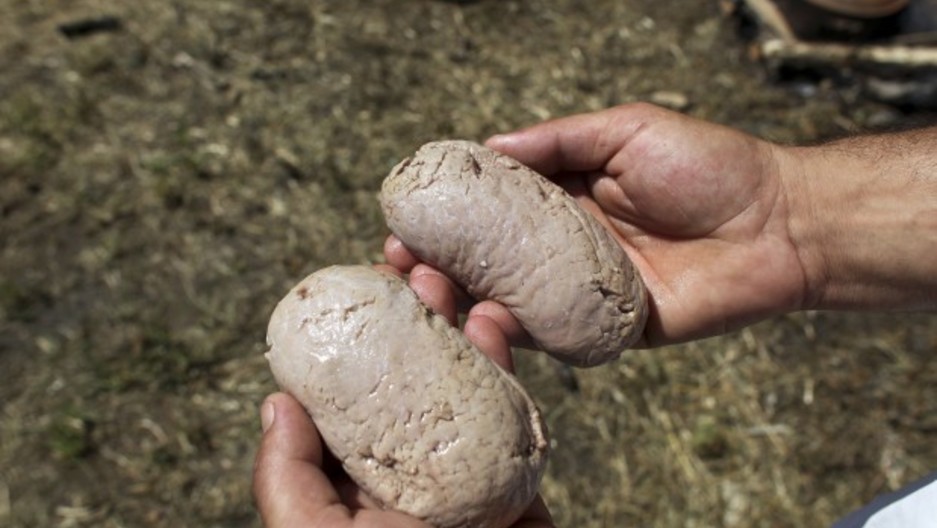 A man shows pig testicles before cooking them during the annual "World Testicle Cooking Championship" in Serbian village of Ozrem August 28, 2010. This is the seventh time that the World Testicle Cooking Championship in Ozrem is taking place and the organisers are expecting it to attract more international tourists. The dishes are made from the testicles of animals including bulls, pigs and goats. REUTERS/Marko Djurica (SERBIA - Tags: SOCIETY FOOD) - RTR2HN4A

A tiny Serbian hamlet plays host to the 10th annual World Testicle Cooking Contest. A panel of judges pours over bowls of goulash that have been stewing for hours and served in clay pots.

"I'm looking for taste and the mix of spices and what you can actually develop this into," he says. "How can you actually present this on an international table–that's what I am after."

This contest is a small affair with just a few hundred people–most of them part of the dozen cooking teams.

Spectator Cornelius Vermeer, a Dutchman from Amsterdam, traveled to Serbia especially for this event. As he slams down one bowl and digs into another, he says he can't wait to try them all.

"I want to taste it here. They have a few–like from the cow, from the pig, I have tried this one–I don't know what it's called but it's very good!"

The event attracts mostly middle-aged men for a weekend of barbecuing and drinking. It's a male-dominated atmosphere. But not all women shied away. Megan Hogarth from Tasmania, Australia said the atmosphere was electric.

"I think there are a lot festivals all around the world that are much bigger and much more better known that aren't half as interesting as this," she says. "I mean, everyone is cooking testicles of all things and a lot of them are from countries where it isn't actually common to eat testicles which makes it all the more strange."

Festival founder Ljubomir Erovic says he's happy to keep the event small while reaching out for maximum publicity. He says Serbia is working to shed its bad image from the violent breakup of Yugoslavia and it's pageants like these he likes to celebrate those that have the courage, or the balls to be the underdog.

"You know, Swiss have cheese, Scots have scotch but we Serbians have balls."

Organizers will also elect the "Ballsiest Man of the Year." Past recipients include President Obama and Wikileaks founder Julian Assange. This year's ballsiest man won't be named untill the end of the year, but tipped for the prize are German Chancellor Angela Merkel, and former NSA contractor Edward Snowden, both of whom have shown strong will and courage on the world stage; in other words, real cojones.