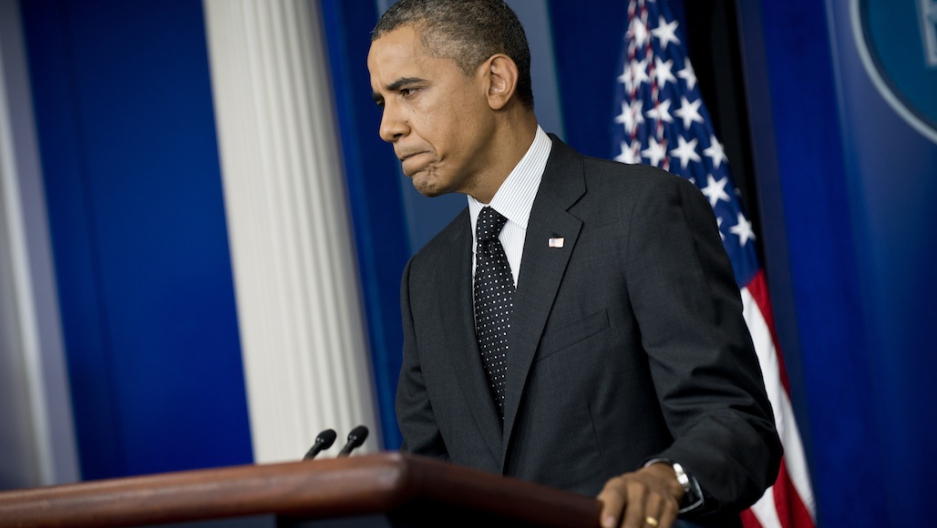 US President Barack Obama pauses during a press conference in the briefing room of the White House August 20, 2012 in Washington, DC.
Credit: BRENDAN SMIALOWSKI
Share

CAMBRIDGE, Mass. — Whether you agree or disagree with President Barack Obama’s surprising decision to ask Congress to authorize the use of force against Syria is last weekend’s question.

Now that the Senate has begun a vigorous debate, this week’s only pertinent question is whether the United States will respond to the Syrian government’s use of chemical weapons against innocent civilians.

From a foreign policy perspective, the decision isn’t even close — the US must act by attacking Assad’s air force, artillery, and command and control assets within Syria.

The goal should be to intimidate him by degrading his military capacity and thus deter him from ever using these weapons again. As the Economist magazine argued, “Hit him hard."

Syria isn’t a sideshow. Given its location in the heart of the Arab world, next to US friends Israel, Jordan, Turkey, Lebanon and Iraq, what happens in its civil war matters deeply to the US.

We have other important interests there. The most urgent is to demonstrate the US is still the dominant power in the region and that we can back up the threat President Obama made more than a year ago: if Assad crossed the line to use chemical weapons, there would be a price to pay.

He has done so twice. We now need to act.

Here are five reasons why Congress should authorize the use of force by next week so that US effectiveness and credibility can be sustained in the world’s most violent and unstable region:

First, the global ban on chemical weapons needs to be enforced. The list of leaders who have ordered their use is short and telling — Adolph Hitler, Saddam Hussein and now Bashar al-Assad. These weapons, like nuclear and biological agents, are so dangerous to civilians as well as the military that their use has been banned since just after the World War I. Absent an effective United Nations, the only sheriff who can enforce this vital international law is the US, supported by a few close friends like France. If we don’t insist on a zero tolerance standard, the chemical weapons genie will likely be out of the bottle forever.

Second, Iran is watching. The much greater challenge for the next 12 months is whether we will negotiate the end of the Iranian nuclear program or strike Iran to stop it. You can be sure the Iranian government is watching Obama closely to gauge how serious and tough he is on Assad. American resolve on Syria makes it more likely Iran will negotiate seriously on nukes rather than risk a US strike down the line. A cardinal rule in international politics is that force often aids diplomacy. We may have a much better chance of negotiating a deal with Iran on nukes if we are tough now on Syria. And we may even have a shot at finding a negotiated solution to the Syrian civil war if we stop Assad now on the issue of chemical weapons.

Third, striking Assad may also weaken the Iran/Hezbollah/Russia axis that forms Syria’s international lifeline. Their ascendency in the heart of the Middle East is a strategic challenge to every important American interest in the region. If we have a chance to stall their advance and weaken their military support to the Syrian armed forces, we should do so. This is why John McCain is so right to argue for a strike strong enough to make a strategic difference.

Fourth, America’s credibility is at stake. Opponents of a US strike have questioned whether the US will really suffer a blow to our reputation if we fail to act. They could not be more off base. Nation states, like individuals, are judged every day on whether they are reliable and honor their promises. Credibility is a real and tangible commodity in international politics. It takes decades to acquire a good reputation and only a short time to see it evaporate. John McCain is right again to warn that if Congress fails to authorize force in Syria, it would be a “catastrophe” for America’s credibility.

Fifth, there is a much larger issue at stake for the US in Syria — it is also a test of our global leadership. We are the undisputed world leader due to our economic, military and political might. We are, in the words of Princeton’s John Ikenberry, the “system operator” of the international order. Together with other major powers over the last century, we have created laws, rules and codes of behavior that all nations must honor. The US is the enforcer and the hub around which the system is regulated. Without American energy, attention and action, the world order cannot function well.

There are real risks in using force in Syria. But, there is a greater risk to our ability to lead if we do nothing.

This is not a message the growing number of neo-isolationists in both political parties in Congress want to hear. But it is fundamental to our wish to live in a world that has rules, order, civility and justice.

This is how the world really works. Without constant, aggressive, effective and smart US leadership, the global order will begin to break down. Presidents Reagan, the two Bushes and Bill Clinton all understood this. President Obama does too.

This is one of those moments. The US has to act in Syria.