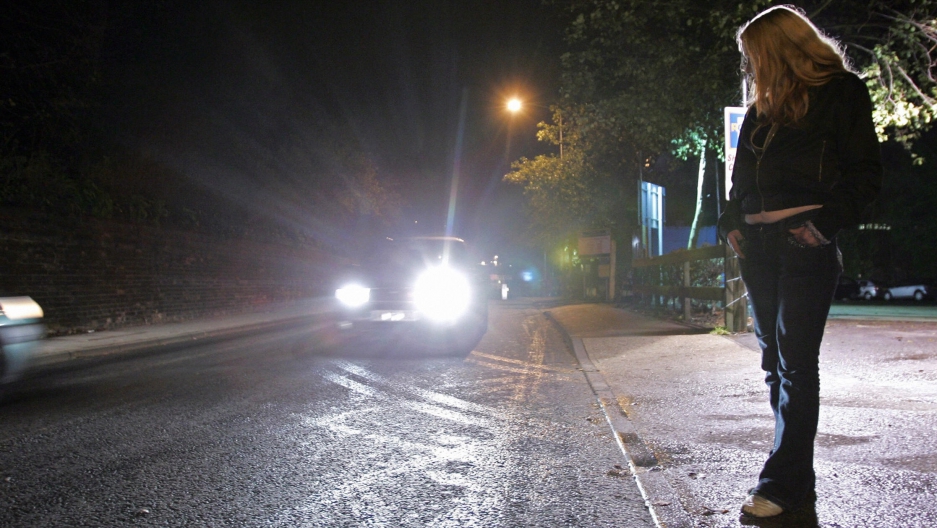 A prostitute in Suffolk, in eastern England, which was gripped by a serial killer scare in 2006 after the death of five women. Sex workers are many times more likely to be targeted by criminals.
Credit: Carl de Souza
Share

GlobalPost looks at the changing nature of sex work in Britain in the fourth of a four-part series.

LONDON, UK — For all the sex industry’s diversity, at least one fact unites sex workers who are male or female, gay or straight, and those who work on the street or inside apartments.

They’re far more liable than most to become victims of violent crimes.

Prostitutes are 18 times more likely to be murdered than women of the same race and age outside the industry, according to a 2012 report that echoes various other surveys.

A 2002 study of street sex workers in the northwest county of Merseyside found that 80 percent of prostitutes surveyed said they had been violently assaulted at some point in their careers. Forty percent said they’d experienced an attack in the last month alone.

“People think because you do what you do they can do what they want to you, because you’re lower than the low in some people’s eyes,” one sex worker told researchers at the time.

Perpetrators target sex workers for various reasons. Prostitutes are likely to be carrying cash. Criminals may look down on sex workers as undeserving of basic rights.

Others believe prostitutes are safe to attack because they’re unlikely to go to police.
They’re often right.

Asked on the website Ask.fm if she would report an abusive client, one sex worker replied, “For the majority of areas I would say no. Never. I've done it before and it was pointless and I got in more trouble than the person who hurt me.”

Prostitutes cite a number of reasons for their reluctance to go to the police, including the belief that their testimony isn’t taken seriously and concern that the authorities would target them instead.

That’s not unfounded. When an east London brothel was held up in a violent robbery by an armed gang in 2011, police appeared more interested in shutting the establishment down than pursuing the robbers.

After two other brothels were subsequently attacked by the same gang, they decided not report the incident to police, according to a 2012 report.

Crimes against sex workers often aren’t fully investigated unless perpetrators begin to target people outside of the sex trade.

In 2010, a 22-year-old man named Sunny Islam forced a 15-year-old girl into his car at knifepoint from an east London street, drove her to a secluded spot and raped her.

When police investigated her report, they discovered three previous cases with similar details. All of the victims were sex workers, none of whose cases had been fully investigated. Islam was convicted in August 2011 on seven counts of rape.

Part of the explanation may lie in the longstanding perception that officials look down on sex workers.

Industry advocates still point to public comments made during the 1981 trial of Peter Sutcliffe, the “Yorkshire Ripper” serial killer whose 13 female victims included women both in and outside of the sex industry.

“Some were prostitutes, but perhaps the saddest part of this case is that some were not,” Attorney General Sir Michael Havers said at the time. “The last six attacks were on totally respectable women.”

In the same trial, the judge instructed the jury that the lesser charge of manslaughter would be a more appropriate verdict than murder if Sutcliffe believed that all his victims were prostitutes.

That’s because people expect sex workers to be targeted by criminals. “As long as sex work has existed, they’ve been targeted by dangerous individuals,” said Alex Bryce, director of the National Ugly Mugs scheme.

His group is working to change that. The Manchester-based network acts as a kind of national alert system about dangerous clients and as a go-between for sex workers and police.

When Ugly Mugs receives a report of violence or crime against a sex worker, all members are sent an alert with the perpetrator’s description. The information is also passed on to the police with the victim’s consent, without personal details.

More than 1,200 people have signed up since the pilot program launched in July.

Operating on an annual budget of $150,000 — roughly the cost of a single rape case investigation — the network has provided police with information that led to eight convictions, Bryce said, including four violent robbers, one rapist and a serial scammer.

“That’s the only way most escorts would ever go to the police,” says Josh Brandon, a London sex worker who is an ambassador for the organization. “I think that’s one thing a lot of escorts don’t know — the law is almost always on the escort’s side.”

The recent tactic of classifying attacks against sex workers as hate crimes has helped.

First tried in 2006 in the country of Merseyside, which includes Liverpool, it forced police to investigate reports fully and build trust between sex workers.

Better relationships between police and sex workers can have a major impact on public safety.

The sex worker who wrote on Ask.fm that she would never go to the police added a caveat: “If I lived in an area where the police were receptive and not looking to arrest me I would definitely report, because these are almost 100 percent of the time people who will repeat abuse.”