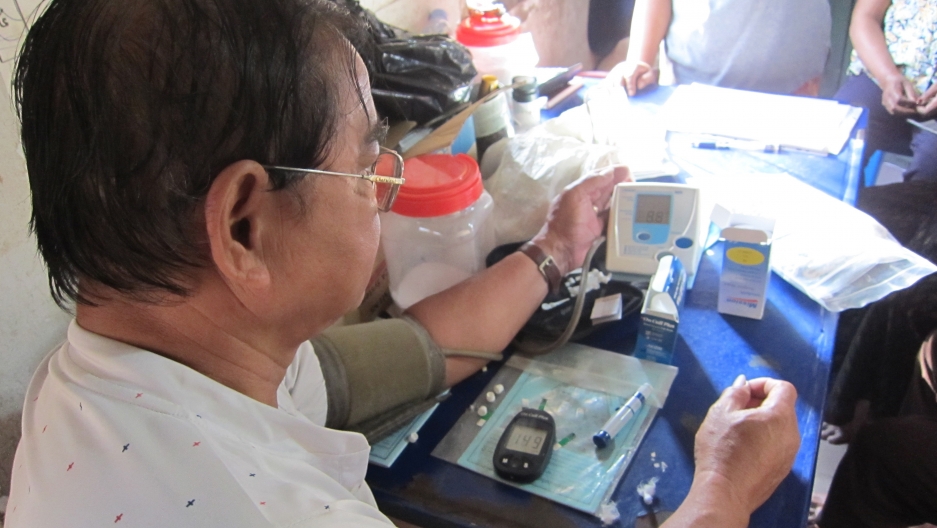 A recently published study shows that, globally, high blood pressure causes more early deaths than any other preventable risk factor, including smoking, obesity, and childhood malnutrition. Developing countries, where hypertension is increasingly common, are ill equipped to handle it.

Take Cambodia. Right now, high blood pressure is less common here than in the US – about 11 percent of adults in Cambodia have it, compared with 31 percent in America. But the prevalence is rising much faster in Cambodia than in the US. It has jumped from the fifth most common preventable risk factor for death in 1990 to number two in 2010.

"For the past 10 years the economic situation has improved. People are eating better, and the lifestyle has changed," says neurologist Chum Navuth, through a translator. "But not many people are aware of high blood pressure, or what to do about it."

Take the case of retired train conductor Khlork Heng. At 73, he has lived through the starvation days of the Khmer Rouge, and he now has a little paunch. He also has high blood pressure. Khlork's friends say he sometimes gets confused or is completely withdrawn for a few minutes – a possible warning sign of an impending stroke.

But Khlork doesn't really know how to treat his high blood pressure. "I don't take any medicine," he says. "I don't know what sort of medicine to take. Nobody told me." Still, he is a step ahead of most Cambodians. Between 80 and 90 percent of Cambodians who have hypertension do not even know it.

Perhaps the biggest reason Cambodians with high blood pressure go undiagnosed is their disease is usually silent – no symptoms, no pain, nothing to send them for medical help. Few here see doctors regularly, if at all.

And the average doctor in Cambodia is more attuned to treating infections and trauma than chronic, everyday diseases. Physicians do not always take their patients' blood pressure, and when they do, they rarely tell their patients if there is a problem and what to do about it, according to health experts.

Even when patients are diagnosed with hypertension, they may still go untreated. Many Cambodians cannot afford to pay for blood pressure medication and may not understand that the drugs need to be taken for life. "We have a major problem of compliance," says Dr. Koy Vanny, who treats patients at Calmette Hospital in Phnom Penh. He says many patients do not take the medicine they're prescribed. "When we see them again, they have complications," he says.
Turning a Ship

On a global level, charities and donor governments have historically paid little attention to non-communicable diseases, such as hypertension, in developing countries. Funding has generally gone to improve maternal and child health, and to fight infectious diseases.

Dr. Sin Somuney, executive director of MediCam, an umbrella organization for charitable groups in Cambodia, says getting international donors to address hypertension has been a challenge. "They seem to think it's a country problem" – that is, a problem Cambodia should solve on its own – he says. Infectious diseases, which can easily spread to other countries, get more attention from international organizations, he contends. And Sin adds that since hypertension almost always strikes adults, he cannot raise money with pictures of sick babies and children.

Tim Johnston, who just finished up a stint as a health specialist in Cambodia for the World Bank, says the time has come for major international organizations to focus on non-communicable diseases.

"If you start now on prevention [of high blood pressure], the cost later will be less," Johnston says. "There will be a huge savings for the economy and also for the people."

Developing programs of education and early diagnosis is a big change in direction. "It's not going to be easy," he says. "It's kind of like turning a ship."

But there is evidence that the ship is beginning to turn. At the 66th World Health Assembly in Geneva this May, nations of the world called for greater attention to non-communicable diseases. And in Cambodia, the government has begun working with the World Bank, USAID, and other organizations on a health system that emphasizes diagnosis and treatment of chronic diseases.