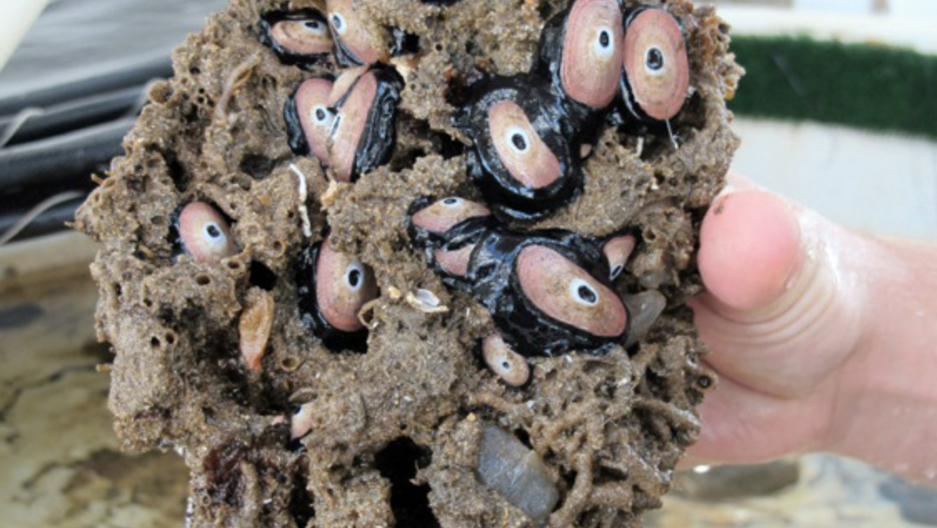 Think medical breakthrough, and you're apt to picture a high-tech lab with gleaming steel equipment. But medical advances can also come from nature, such as the seaside.

On a rocky strip of land in Port Hueneme in Southern California is a unique medical facility. Researchers have found a way to grow an unusual marine mollusk that may play a major role in future vaccines.

Brandon Lincicum, the aquaculture manager for Stellar Biotechnologies, supervises as large pumps move nutrient-rich seawater from the port to the facility's growth tanks.

"This is what you’ve been waiting to see. This is Megathura crenulata right here, the giant keyhole limpet," he explained.

Lincicum reaches into the tank and pulls out a round, purplish animal that looks like an abalone — hard shell, but with parts of the body able to fold up it's almost slimy.

It takes years for them to grow large enough to be useful for the facility's medical technology. They're bred artificially and then allowed to grow in the natural waters of the Pacific Ocean until they can be harvested — for their blood.

Frank Oakes, the CEO of Stellar Biotechnologies, says there's a substance in limpet blood — Keyhole limpet hemocyanin, or KLH — that is much like human hemoglobin. Hemoglobin is responsible for transporting oxyge around the human blood system.

Limpets and their hemocyanin have been researched for years — but always using natural limpets, without regard to how harvesting and killing them might negatively affect their population specifically or the environment generally.

Enter Oakes, who has a background in aquaculture and wanted to see if he could artificially breed limpets so this important research could continue without endangering the wild population of limpets. And that's not all.

"In the late 1990s, we started work on developing nonlethal extraction methods for the animal, so we can take the blood without killing them," he added.

Getting limpets to grow in captivity was no easy task. Oakes had to learn how to coax them into reproducing. He had to learn what conditions they grow best in. And because the limpets are part of medical research, there has to be strict quality control to prevent contamination.

Today, thousands of limpets go through their entire life cycle in a controlled system, giving blood several times a year.

"Without it, a lot of the vaccines will not work," Oakes explained.

Herb Chow, a vice president at Stellar Biotechnologies, says to understand why KLH is useful, you have to go back to the early days of vaccines.

Medical researchers would take something harmful like a virus, kill it, and then inject it into your body. Your immune system would see the inactive virus and it would learn how to attack it.

"It does accomplish that activation or stimulation, but it comes with a price," Chow said. "The price is some level of toxicities: People get sick because the toxin is still there."

So researchers took viruses apart, pulling off the small chunks that your immune system could attack. They injected those smaller pieces as the vaccine, but there was a problem. As Chow explains, those pieces were too small for the body to really find.

But attach those virus pieces to KLH, and it’s like attaching reflectors to a plane — all of the sudden your body sees it.

And your immune system mounts an attack or starts making antibodies. KLH itself is neutral and doesn’t harm you. Chow says it’s being used in vaccine research for Alzheimer’s and autoimmune diseases.

"The problem with the cancer cells is a lot of the antigen that are expressed on the cancers is actually your own tissues. The body sees them: This is my own, I shouldn’t react to it," Chow said.

Cancer cells are, in essence, your own cells, which fools your immune system into letting them keep growing. Eventually, they grow so large your body can't deal with it.

So doctors use treatments like radiation and chemotherapy, which target all fast-growing cells in your body. But Chow says that’s why cancer vaccines have such promise.

"It’s something that it’s high on the radar screen because of the characteristics - that they can differentiate the normal cells from the tumor cells and be able to target the treatments to the tumors," Chow said

As scientists try to create these vaccines, they need a lot of KLH for their research, and more if they go into production.

"The long-term commercial demand for KLH looks very promising because it’s a key ingredient in a wide variety of drugs that are currently in clinical development," CEO Oakes said.

The challenge is that vaccines take decades to develop - and not all of them come to market.