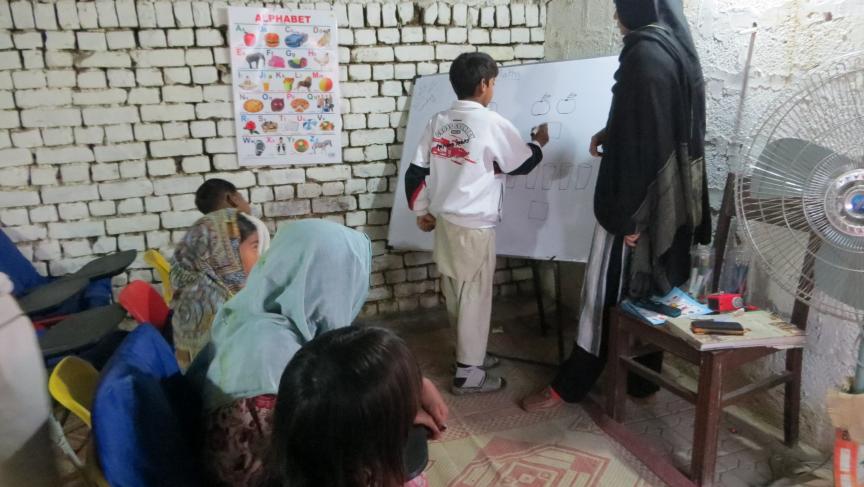 Pakistan is a country with stark inequalities. Even middle class families can hire domestic help to do everything from mowing their lawns and ironing their clothes to cooking their meals.Those who provide these services often live in shantytowns in the shadows of the big, gated houses where they work. Seeing this stark divide for himself prompted one young person in the country's capital to create change.

"I really did not expect something of that sort to sit right in the middle of one of the most expensive sectors in Islamabad, because I'd never seen the village from the inside before," says Haroon Yasin.

The college-student decided to step into the slum where his maid, Aziz Bibi, lived after watching her children laze around his house while she worked.

"It wasn't just one life that was being underutilized in my opinion, it was three lives. Because the other two , when they weren't watching TV or sitting in the sun, they were helping their mom and it was really inevitable that they would follow the same fate and become servants or something like that, too."

Like many other low-income parents, Aziz Bibi wouldn't send her kids to public schools, even though they're free. Public school teachers in Pakistan are notorious for skipping class and rowdy kids create havoc in overcrowded classrooms.

Yasin says something had to be done to get them out of the cycle of poverty. That meant venturing into the labyrinth of narrow dirt roads lined with open sewers situated just across the street from the large, gated houses where he and his friends lived. The difference between these two neighborhoods was jarring.

Yasin says there was a near-total breakdown of law and order in the slum community. The area's nannies, maids and cooks lived in this congested shantytown with no running water and only spotty access to electricity.

But even as he filled the school with desks and chalkboards, many remained skeptical of Yasin's efforts. Even his housekeeper, Aziz Bibi, was suspicious. She says people in her community couldn't believe that he had good intentions.

"They used to give our children things, and so people started to think that they were bribing them to take them away," she says in lilting Punjabi. "We all got scared and took our kids out, but then after while we saw that those who were still enrolled were doing good work so I sent my kids back and so did a lot of other people."

In the end, Aziz Bibi recalls, people in the slum came to see Yasin's small school is the best option for their kids.

"I'm thankful to God that my kids are learning something about the world now," she says. "I don't want them to be pushing brooms their whole lives like me, simple as that."

Creating such opportunities has meant more than simply teaching children to read and write. Yasin has had to reach out to parents – both of students and the college-going volunteers who are often discouraged from going into the slum.

That because in Pakistan it's nearly impossible for poor and middle class families, let alone wealthy ones, to connect in any meaningful way.

"What we're trying to do here is to unite both of these communities by making sure that both of sets of people interact," says Yasin. "It's very rare but they do, and when they do, they get an idea of how similar they are in terms of being parents and in terms of realizing that they want the same thing, just that they've been taught a wrong perception of each other."

Events like a celebration of the school's first birthday where children with bright, beaming smiles burst into cheers when volunteers carry out a small chocolate cake have helped things along.

Looking out at the children, Anila Gul, who teaches at the school says, she sees a lot of unknown faces in the crowd.

"A lot of these students come for maybe just a day or two, then take a holiday and sometimes come back," she says. "Now they've seen the balloons and lights, so a lot of the kids have come."

Kids like Shaida Sujwar who says she wouldn't be at school at all if it weren't for this place.

"We like our studies and the people here because they come and do so much for us – and not just today," the first grader says. "They work really hard just so we can get an education."

The day after the party, there are fewer students in the school, but the ones who have come look focused and excited by the lesson at hand.

Beenish Ahmed is a freelance multimedia journalist based in Islamabad. She reported this story with support form the Pulitzer Center on Crises Reporting.