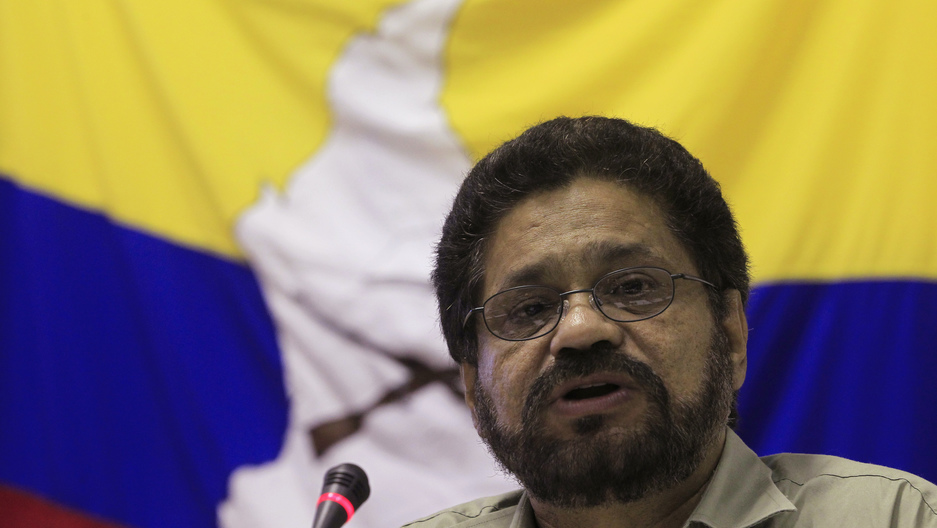 Colombia's Revolutionary Armed Forces of Colombia (FARC) lead negotiator Ivan Marquez talks to the media during a news conference in Havana January 24, 2013. Marxist rebels and the Colombian government adjourned their latest round of peace talks on Thursday with no major advances toward ending their long conflict and said they had significant differences to overcome despite some areas of agreement.They said they agreed that the lives of the country's rural poor must be improved, which is the key issue in their 50-year-long war, but not on how to go about it. REUTERS/Enrique De La Osa (CUBA - Tags: POLITICS CIVIL UNREST) - RTR3CWUZ

Share
At peace talks in Cuba, the Colombian government is urging Marxist rebels to disarm and form a political party. The guerrillas, known as the Revolutionary Armed Forces of Colombia (FARC), are understandably wary. In the 1980s, the FARC founded the left-wing Patriotic Union party only to see thousands of its members gunned down. But the government claims that security has improved and that Colombia is now safe for one-time guerrillas to stump for votes. Since launching a guerrilla war in the 1960s, the FARC has claimed that it's too dangerous for leftists to run for office and that armed struggle is the only path to political power. The rebels speak from experience. During a ceasefire in the 1980s, the FARC formed the Patriotic Union and the government promised to protect its members. But the FARC refused to disarm. And when the party's candidates began winning elections, right-wing extremists charged that the Patriotic Union was paving the way for a rebel takeover. The result was a bloodbath. All told, 3,000 Patriotic Union members, including dozens of city council members, mayors and congressman, were killed. Also, two of the party's presidential candidates were assassinated, allegedly by paramilitaries who often worked in cahoots with the Colombian army. Steven Dudley wrote a book about the Patriotic Union called "Walking Ghosts." He calls the destruction of the party "political genocide." "And what was left of this political party," said Dudley, "was this sort of lost hope, this sense that an opportunity had been blown in the 1980s for Colombia to come to some sort of peace agreement." The FARC has also committed war atrocities, such as massacres and kidnappings. So, even if the two sides reach a peace deal in Havana, some rebels may be legally barred from running for office. But those guerrillas who are allowed to run fear a violent backlash. "Our main goal is social justice," said chief FARC peace negotiator Ivan Marquez at a recent news conference in Havana. Years ago, Marquez disarmed and served in Congress for the Patriotic Union. But amid the killings, he figured the only way to survive was to return to the mountains with the FARC . Now, Marquez vows that the FARC will not repeat the tragedy of the Patriotic Union. Still, Colombia's political landscape has changed dramatically. The paramilitary groups that targeted the Patriotic Union in the 1980s and 90s have largely disarmed. What's more, former fighters from other guerrilla groups that signed peace treaties now serve as legislators and mayors. Last year, Gustavo Petro, a former guerrilla, was inaugurated as mayor of Bogota, Colombia's capital. Meanwhile, the Colombian government is trying to make amends for its role in the destruction of the Patriotic Union. At a somber ceremony in the Colombian Congress, the government formally apologized for the death of Manuel Cepeda, a Patriotic Union senator who was killed in 1994 by state security agents. Last month, a Colombian court restored legal status to the Patriotic Union. And surviving members are determined to re-establish their party. But this new Patriotic Union doesn't even have an office. When I meet up in downtown Bogota with the party's leader, Omer Calderon, we talked in a deserted café. "We're looking to build a broad alliance between the Patriotic Union and other left-wing parties," said Calderon, "leading to a significant leftist presence in the Colombian Congress." Calderon said that alliance could include members of the FARC if the guerrillas sign a peace accord. Despite the dangers, author Steven Dudley believes it's time for the FARC to give peaceful politics a second chance. "Initially, anyone who runs a campaign and who is an ex-guerrilla, especially an ex-FARC member, is going to have to have incredible amounts of protection. However, over time these wounds will heal. It takes a while, but these things change. And people's perceptions of these guys change. And I think the same would happen with FARC members." For that for happen, the FARC must first agree to lay down its arms. But after nine months of peace talks, the guerrillas and the government have yet to make much progress on that front.