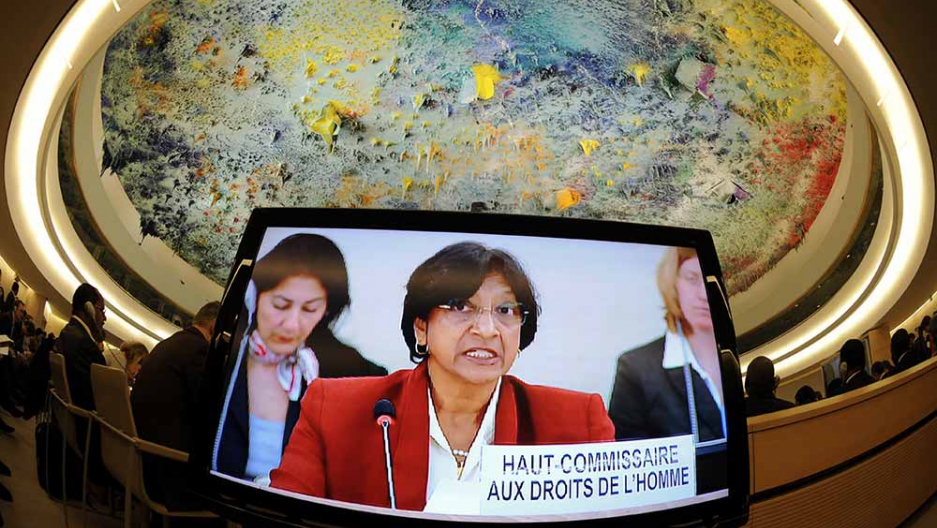 UN Commissioner for Human Rights Navi Pillay appears on a TV screen at the opening of a session of the United Nation Human Rights Council on February 27, 2012 in Geneva. Pillay recently added Israel to a list of countries that restrict human rights groups.
Credit: Fabrice Coffrini
Share

After spending a week visiting former war zones in Sri Lanka, a country that was embroiled in a 26-year civil war until 2009, UN Human Rights Commissioner Navi Pillay has criticized the government for becoming more authoritarian.

In a statement, Pillay said, “the war may have ended, but in the meantime democracy has been undermined and the rule of law eroded.” She noted that the government has abolished requirements for independent police, judiciary and human rights commissions.

She also sounded the alarm about the military’s increasing involvement in civilian life and reports of military land grabbing.

“I was concerned to hear about the degree to which the military appears to be putting down roots and becoming involved in what should be civilian activities, for instance education, agriculture and even tourism,” she said.

Pillay, a South African of Indian Tamil descent, reported that the government allowed her to visit all the sites she wanted to see, but security forces harassed and intimidated Sri Lankans who talked to her.

"This type of surveillance and harassment appears to be getting worse in Sri Lanka, which is a country where critical voices are quite often attacked or even permanently silenced," she said. "Utterly unacceptable at any time, it is particularly extraordinary for such treatment to be meted out during a visit by a UN high commissioner for human rights."

The government has denied it harassed citizens or scaled down its military presence before Pillay’s visit arrived, stating that it had "nothing to hide.”

The Sri Lankan government has angered the international community by refusing to investigate whether a massacre of civilians occurred at the end of the civil war in which Sri Lanka’s army defeated separatist Tamil rebels.

The government says 9,000 people were killed in the war’s final months, but the UN suspects that 40,000 people, mostly Tamils, died during that time.