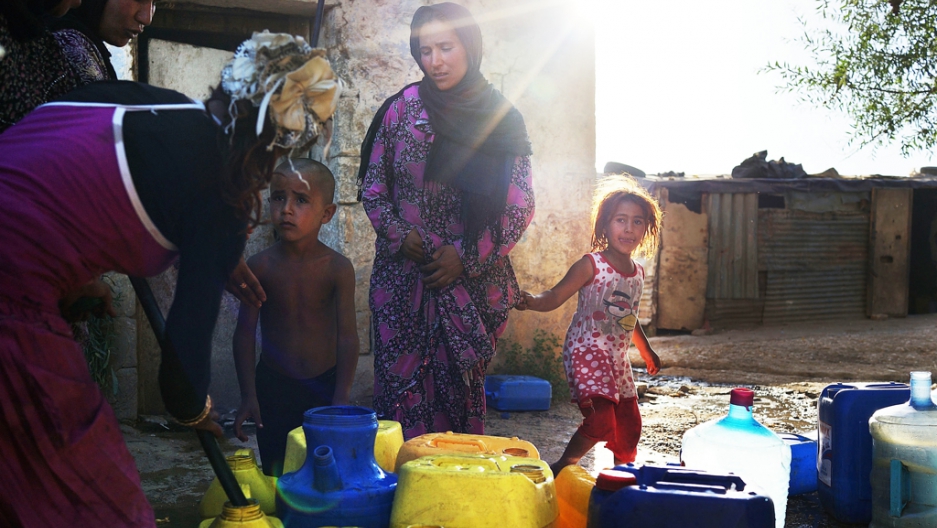 Syrian refugees fill jerry cans with water at a pump inside a camp for Syrians who have fled the fighting in their country on June 28, 2013 in Baalbek, Lebanon. Baalbek, which is located near the Syrian border, has numerous informal camps housing tens of thousands of refugees.
Credit: Spencer Platt/Getty Images
Share

QAB ELIAS, Lebanon — The United Nations refugee agency is preparing for an influx of Syrian refugees into Lebanon as the United States prepares for military strikes against Syrian regime targets in Damascus and around the country.

Several thousand new refugees have fled Damascus for Lebanon in recent days, worried not only about US air strikes but also an escalation in violence in an already bloody civil war.

They will join the more than 716,000 Syrian refugees already inside Lebanon.

According to the UN and other aid agencies, around 1 in 4 people in Lebanon is a refugee, including the hundreds of thousands of displaced Palestinians who have lived here for generations.

“It’s a huge number,” Patricia Mouamar, a spokeswoman with World Vision, an American evangelical aid organization that works in Lebanon, said of the refugees. Lebanon’s population is just 4 million. “And the cracks are starting to show in the community.”

More from GlobalPost: Lebanon explosions: Is it different this time?

More than 100,000 people have been killed in Syria’s ongoing civil war.

There’s worry that a sudden arrival of more could destabilize the country further.

Unlike the other neighboring countries accepting Syrian refugees — like Turkey and Jordan — there are no official refugee camps in Lebanon.

“We often say that camps are sometimes easy to put up but more difficult to take down,” said Ninette Kelley, the United Nations High Commissioner for Refugees (UNHCR) representative in Lebanon.

Instead, the displaced live among the local population and shoulder the costs of food and housing. They’ve flocked to some of the country’s poorest areas, where they compete with local Lebanese for jobs and resources.

Across the country, stories swirl of violence between Lebanese and Syrians.

Fayyad Haydar is the mayor of Qab Elias, a pretty town tucked between sloping mountains and the rich farmlands of the Bekaa Valley in eastern Lebanon.

Before the war in Syria, 50,000 Lebanese lived here. Now, the community hosts more than 18,000 Syrian refugees, he says.

On the outskirts of town, tent settlements of Syrian communities have sprung up. Many others settle into apartments in the town center.

“We welcomed them in the beginning,” Muntaha Deeb, a Sunni Muslim woman from Qab Elias, said of her new Syrian neighbors. “But they made us hate them.”

The mother of a disabled child, Deeb says aid organizations that used to support Lebanese in need now provide for Syrians instead.

Her sister Najat Mehri, a cleaner, said the arrival of so many Syrians has made it more difficult to find work.

In a recent poll of Lebanese nationals conducted by the Norwegian research foundation Fafo, more than half of respondents said they believed Syrian refugees were a threat to national security and stability.

Ninety-eight percent said they agreed that Syrians were taking away jobs from Lebanese “to some extent” or “to a great extent.”

Historically, Lebanese are fearful that outside populations could transform their carefully maintained patchwork of sectarian communities, and plunge the country into civil strife.

More than 96 percent of registered refugees are Sunni Muslims, according to the UNHCR.

These fears have roots in the Lebanese experience with Palestinian refugees, who played a major part in Lebanon’s complicated and brutal 15-year-long civil war in the 1980s and 1990s.

Already, some Lebanese sentiments toward Syrians echo the xenophobia of the conflict with Palestinian refugees decades ago.

“We should find a solution to kick them out of here, because their dirt is reaching us. They are not clean,” Deeb said. “I would not hesitate to carry arms and shoot them like Bashar [al-Assad, the Syrian president] is doing.”

A short drive from Qab Elias in the town of Saadnayel, Syrian refugee Bushra Obeid Saad lives with her family in a small room on the bottom floor of a building under construction. Other refugees nearby live in windowless garages meant for cars.

Refugees in rural areas can find work in farms now, but winter will put an end to these earnings and bring a new level of desperation, warned Haydar, the Qab Elias mayor.

Aid agencies are tightening budgets. And the UN’s World Food Program, which has been handing out food vouchers to registered refugees, will soon be moving to a targeted assistance campaign.

“I do not know if the hungry will keep waiting, I don’t think so,” Haydar said. “What will he do? He will steal, he will attack, whether he is Lebanese or Syrian.”

Kelley, of UNCHR, says the plan should be to provide assistance that will offer long-lasting benefits to the communities that are hosting Syrians, and immediate help for the refugees themselves — like water and sanitation projects and the refurbishment of unused buildings.

But many Lebanese are worried the Syrians will never leave, as their nation’s conflict intensifies.

“If we stay like this, we are headed towards total destruction,” said Karim Ibraidi, a Shia Muslim living in the slum of Nabaa just outside of Beirut. “It is obvious.”