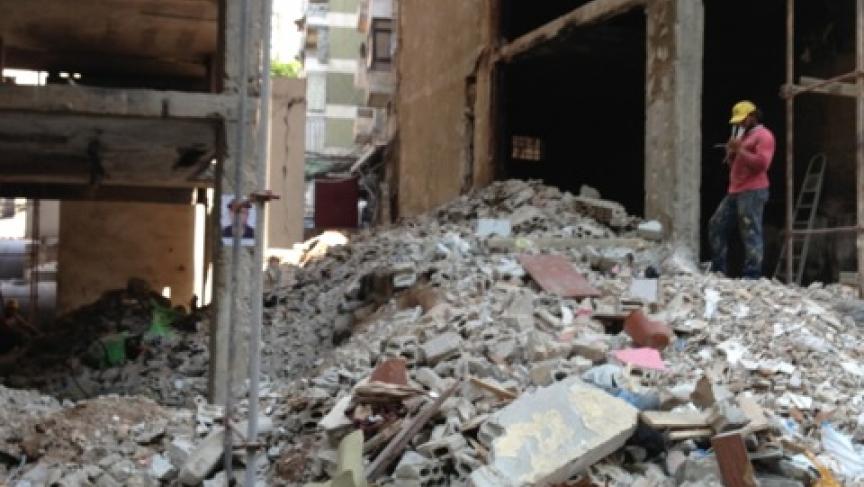 Security was beefed up today around Friday prayers in Beirut as the country increased security as the US threatens to bomb Syria. The UK has also warned its citizens against travel to the country.

The Lebanese have had rough month. And it may get rougher.

Here, young men search vehicles at a makeshift checkpoint. The late leader of Iran's Islamic revolution, Ayatollah Khomeini, gazes down from a large sign tacked to a nearby light pole. These are Hezbollah's men, and they're looking to prevent another car bomb like the one that killed 27 people here a little over two weeks ago. The checkpoints are everywhere, and some men even wear blue, TSA style-gloves as they search methodically through luggage or cargo.

The checkpoints have made the already terrible traffic in the crowded streets even worse – but most people don't seem to mind. 32-year old Hannan lives here, and works at a store just around the corner from where one of the bombs went off.

"Hezbollah have secured the area, so we are feeling safe," she said. "Of course there's going to be traffic and more searches, it's only logical. This is a natural thing and we have to accept it," she said.

What Hannan and others have to accept is that Lebanon seems to be getting dragged further into their neighbor's conflict with every passing week. The Hezbollah dominated Shiite Muslim community supports Syria's Bashar al-Assad, and Lebanon's Sunni Muslims support the Syrian opposition. There have been tit for tat bombings in Lebanon, and scores dead.

Hannan was reluctant to blame those who many analysts and security experts say were the likely culprits of the attack here: Sunni Muslim Jihadists bent on revenge for Hezbollah's military support of Assad. Instead, she repeats Hezbollah's claim that it was Israel.

"There's a hidden hand that is moving things towards creating some kind of strife among the different sects, between the sunni and the Shiite," Hannan said. "We are one family, but there is a hand that's planning a role in crating internal strife."

During interviews with Hannan and others, we were accompanied by a Hezbolah minder who listened to all of our interviews, and even tried to coach people about what to say. But it's not just Hezbollah looking to put the blame on the "hidden hand" of Israel or the US. Lebanese on all sides of the political spectrum do that to try and diffuse tensions.

Fifty-one-year-old Mohammad is a key maker whose shop had its front windows blown out by the blast two weeks ago. He' a big, burly tough guy – but he's also a grandfather. He conceded that, like a lot of Lebanese these days, he is worried about the security situation – especially for his children and grandchildren.

If they would come to the front of the fight, we wouldn't' have any fear. But of course when you have women and children, and the attackers use car bombs and rockets, and bring down buildings, you fear for your family," Mohammad said.

And it's not just people in this area who are worried about security.

Beirut's renovated downtown boasts high-end stores like Prada and Rolex alongside this H & M department store, and swanky coffee shops and restaurants. On a Thursday evening, usually the area is filled with shoppers and tourists. But tourists–including wealthy Gulf Arabs–are few, and many Lebanese expatriates who usually return in the summer have opted to stay away. Restaurants and shops have shut down.

This area is also popular for families with young children, who take advantage of the car-free pedestrian zone where kids can play. Today, though, 39-year-old Rayana is one the few parents here – she brought her two daughters to zip around on their scooters.

"I thought I'd come here to downtown because I thought there might not be a lot of people. So that's fine, that's even better," she said.

She said she deliberately chose a public place that she thought would be less of a target.

"I thought about downtown, because they search the cars, and then thought of place like this, because it's away from the main roads. If they were going to put a car maybe it would be outside the area. So I thought about this. And yesterday I took my kids to the beach because also I thought the beach, it's a hard place to get – they're not going to bomb the beach. So of course, we think about his a lot," Rayana said.

And Rayana said it worries her even more now that the US and others are threatening Syria.

For example: what happens if Hezbollah attacks Israel in response to a US attack on Syria? And then Israel attacks Lebanon? Or Iran attacks Israel? Rayana said she's worried Lebanon could become another Iraq, and so she isn't going out after dark.

The country is perhaps as staunchly divided as after former Prime Minister Rafiq Hariri was assassinated in 2006. Then, the country was caught in a regional and international tug of war. Now, the same actors are fighting a proxy war in Syria. And many believe that spillover is inevitable.